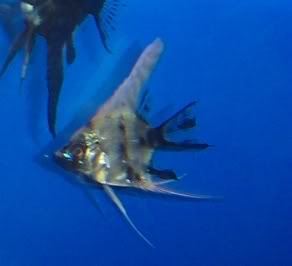 It just stays like that, even when he's just floating in one spot.  It doesn't come down.

Is that normal?  Is he okay?  Do I need to try doing something?

If there is a problem with fins of Angelfish, the best thing you can always do is to keep your water as clean as possible until the ragged fin heals (or the missing fin grows back). Anyway, water should be always clean in an Angelfish tank. How many fish (and what fish) total do you have in your tank? How large is the tank? How large are your water changes and how often do you perform them? What are your ammonia, nitrite, and nitrate readings?

I've had rosy barbs with angels since I got the tank going in January, and I've never had a problem with my angels getting their fins nipped.    The barbs pretty much just keep to themselves...Jerry just happened to get in the way of one of their swimming frenzies.  He's acting perfectly fine, and everything looks all right, except for the position of his fin.  Nothing appears to be torn or anything, and he's functioning fine.  It's a 29 gallon tank, and besides the 4 rosy barbs and 2 angels, I have a few tetras and a pleco.  I don't have a test kit yet, so I can't give you readings. :-[   I don't have a set schedule for water changes, but I'd say we've been doing about 20 - 25% every 2 or 3 weeks.

I keep the tank clean, I've got a good filter for that size tank (AquaClear 110).  My water is nice and clear.

His fin is still like that, but he's also still acting in a normal fashion. Any other thoughts from anyone?

Just one man's opinion, but I would think if he otherwise appears normal and unbothered by the whole thing, then leave it be. Perhaps it will resolve itself on its own eventually, but even if it doesn't I would be more afraid of stressing him/hurting him by trying to "force" a fix.

That's what I've been thinking too, but I was hoping for a second opinion as well, so I appreciate it. I think I will just leave him be, he swims around with Jasper (my other angel) just fine...he's very active and eats well.

I have to agree with sgould, you might end up hurting it by trying to fix it. It just looks sort of stuck, I would give your fish time to unstick it on its own for now.

Thank you, Jim, I appreciate your reply. He sure seems like a happy little guy, so I guess I will leave him alone.

Sometimes one of my Angels will have a split fin. I don't do anything except good and regular water changes. When you keep the water clean, they should be fine. Or at least it appears so in my experience. You may also want to keep the temperature at 79 - 80F in an Angelfish tank if it's lower than that. I wish you best of luck with your Angel. Keep us updated on how it's doing.

Thanks, Isabella.    My tank is usually between 78 and 80 degrees.  My water is crystal clear, and I tested it on Friday and had good readings for everything.

Jerry's fin is still in that position, but I also still haven't noticed anything odd about his behavior.  He and Jasper swim around just fine.  I think his fin bothers me more than it bothers him!