Something is wrong with one of my dwarf pufferfish. I have two of them in the tank. This morning, I came down to find pip lying on the sand in the back of the tank. I thought she was dead, so I went to scoop her out with a net, but she twisted away from the net and went back to lying down, so I know she's alive. I immediately tested the tank water and it is immaculate ( ammonia: 0/ nitrite: 0/ nitrate: 0) and I did a 40% water change less than a week ago (they're due for another water change tomorrow). Also, my other puffer, Sydney is swimming around fine, so I really don't think it's the water. I also don't think Sydney attacked her because she has no signs of physical damage and I saw Sydney swim past her twice without paying her the slightest attention. The past two or three days, pip has not eaten much, but I chalked that up to typical puffer pickiness and I was going to find something else for her to try (right now I'm feeding them frozen bloodworms and frozen shrimp). The only other physical thing off about pip (besides lying on the ground) is that her color is much darker than usual. I'll try to post a pic. 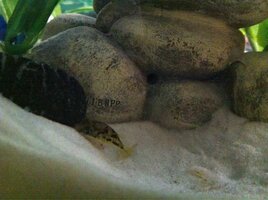 Here is a pic of pip

Sorry for your loss.

Sorry to hear. Did you figure out what might have happened?

I really have no idea what happened. She's always been particularly tiny, ever since I bought her, so I think she may have been sick to begin with, but I'm not sure

So sorry about little Pip. The dark color is a tip off that she was indeed stressed, I would say that Sidney is somehow involved.

So sorry about Pip.
OP

Thanks for the condolences everyone, I really appreciate it. Sydney may have stressed her out, I won't count that out, but they had been living together peacefully for a few weeks. I'm wondering if her being sick and unable to defend herself is what caused her the stress though? Sydney really didn't seem interested in her at the end.