KribensisLover1
Hello! So I thought I had a female lab who would hold eggs every month. I got four small labs to have her eventually move in with once they grow a bit. I don't have a ton of pics of the littles but can you all help me with what I do have? I MEANT to have one male and 3--4 females together. The salesman said it's too young to sex the littles and perhaps this is true. But what about the huge one? Is she a female as I've thought for a year? She's not been with other labs so breeding behavior hasn't helped but about once a month she lies low and her mouth looks distended. I will crack up if I've been wrong!! 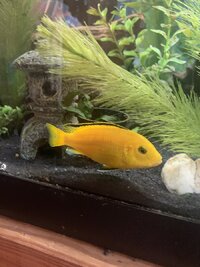 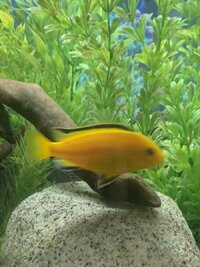 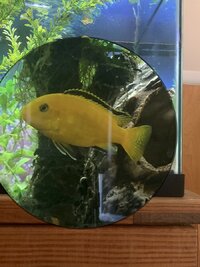 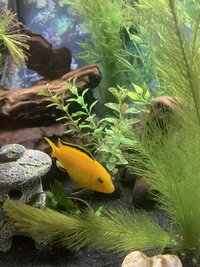 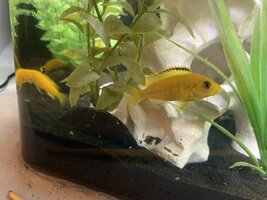 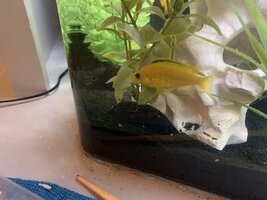 BigManAquatics
I know nothing about what to look for in sexing cichlids, but what i do try to do is when there are fish i want, i research what the differences are and try practicing gender identification when i see them in stores. Might help out in the future, at least! But yeah, there are several fish that you can't really tell until they get certain edges, so that is probably true with yours, as well.
A201
Every Yellow Lab male I've kept had black edging on the dorsal, anal & pectoral fins.
The females usually only had faint black edging on the dorsal fin.
Hope this helps.
KribensisLover1
Thank you! And I actually don't see how it's that hard to see a diff in the juvies but the sales guy who is GOOD said it's too hard and I've read on here it's very difficult so I guess it is!
KribensisLover1
Ok so I had convinced myself the lab was a male based on coloring (after a year of thinking female). The lab usually swims up to me--right to the glass, comes to the top to eat, and chases and maintains territory constantly. AND THEN once again s/he did the monthly routine of: becoming timid, not racing out to eat, hiding, looking like she could be holding in her mouth. These pics aren't great but I took them to try to show her neck and mouth and combined with pics above of full body can anybody determine what sex is? In the top pics do the spots on analfins look like egg spots? 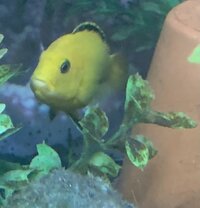 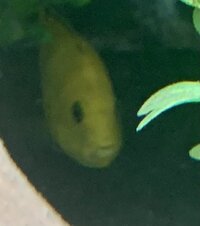 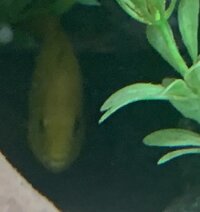 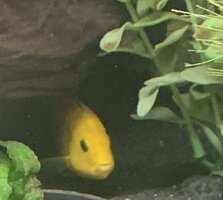 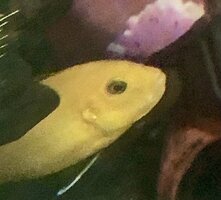 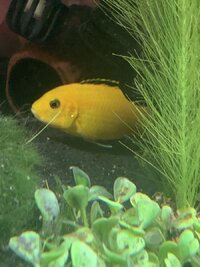 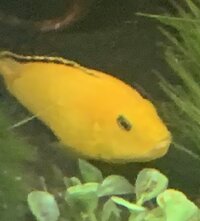 MonsterGar
The lack of egg spots would point to it being a female, but it is still possible for males to not have any egg spots.
MacZ
I find Yellow Labs extremely hard to sex except with venting.

Problem is, there are colour morphs. I had Yellow Labs with those markings that were females.

The lack of egg spots would point to it being a female, but it is still possible for males to not have any egg spots.
Click to expand...

That also is not a save sign.
KribensisLover1
Thank You! Are they even egg spots though? In the top pics? I was used to egg spots on Kribs that are very noticeable. As I observe more, I truly believe it's a female simply Bc her behavior changes drastically at certain times. Right now, when she's acting SO differently, she is still territorial but it's of one small spot where she hangs. When it first happened months ago, I thought she had Malawi bloat, Bc she wasn't eating and had a distended mouth. I guess it's a good thing if she is female, Bc I want to add her to my brood of 4 new labs in my other tank, and I plan to have a m/f ratio of 1:4, so with four new ones, chances are I already have a male in that new group. The 4 newbies are SO small that I fear what will happen when I add this large one. What's funny is I set up the lab tank FOR HER but I have a feeling it might be too late and she will be extremely aggressive. I'm waiting for those young labs to grow and mature before I let the large one loose in that tank. ANYWAY I still am not clear what gender she is, and as said above, likely won't know unless I check venting. Just fun to observe in the meantime!
You must log in or register to reply here.