Alright, here goes my story: So, I have a 55 gallon that I have Pothos and Chinese Evergreen in. I have them growing directly in the water with the roots in the tank. Everything was thriving and growing, then about a week ago I noticed that I was losing a lot of roots. Come to find out my juvenile channeled apple snails are munching on the roots and are killing my plants. Plus, one got a little adventurous last night and climbed out of the tank and somehow by the luck of God, fell into a bucket of water below one corner of the tank, so he is fine.

But I now obviously have to get the plants out of the tank and seal the top up properly now that I know they are going to explore. I still want the benefits of the plants sucking up the nitrates, but I'm trying to figure out a way to grow them out of the tank, but somehow still get the same result. The only thing that I can come up with is breeder boxes because the water flows through those, so theoretically that may work. But then my glass lid sections wouldn't be able to cover the whole top to keep the snails in. I was hoping someone else would have some suggestions or experience with growing outside of the tank. I'm probably going to end up needing similar ideas for my 80g(already has a large Evergreen in there) and 125g as well because I'm planning on putting Pothos in those too, but my 80g is also going to be my mystery snail nursery, so I'm going to need to get that covered somehow as well.

I already tried plastic eggcrate tropher diffuser material for both my 55 gallon and 80 gallon for the Pothos, but I couldn't keep my water level high enough for the roots to thrive, so lost some plants. That would keep the apple snails in, but not the baby Mysteries. But in my situation the plants did not thrive long term unfortunately. So, I removed the eggcrate stuff and just made a little floating dock for the Pothos, which is where they are now. With the snails munching on them. Lol. 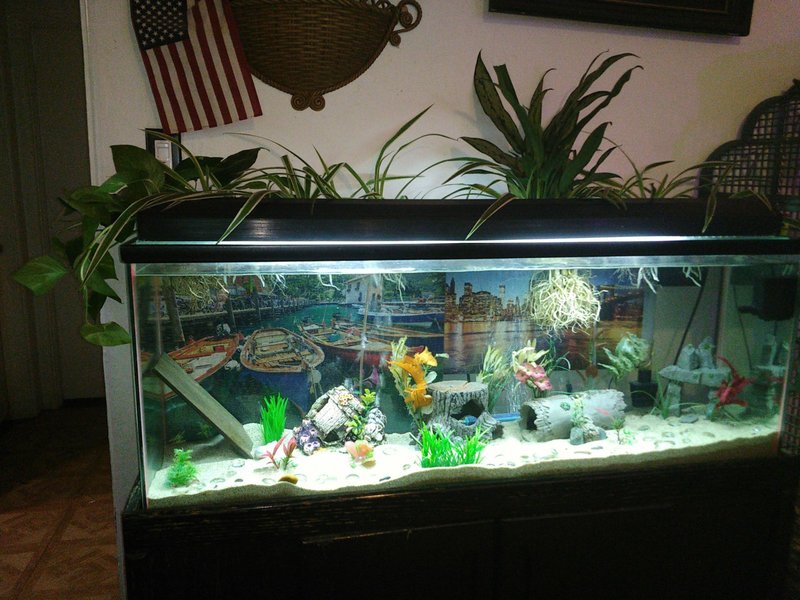 Above is the 55 gallon before the introduction of the Apple Snails using the eggcrate. Worked great until it didn't. Lol. Unless the roots are very very long, the plants struggled, because not all of the roots could reach the water. I had also read all over that Spider Plants worked well too. All of my Spider Plants died within a week. Not sure why. The leaves all melted off even with healthy root systems. Strange. I took out the few remainders and put them back in dirt.

Sorry for the long story, just want you to understand the what's and whys. : ) Any and all suggestions welcome.

I use the Marina Breeder boxes for my pothos .
You just need an air pump to run them.

Here's what I use:
OP

coralbandit said:
I use the Marina Breeder boxes for my pothos .
You just need an air pump to run them.
Click to expand...

Thank you coralbandit, I may end up doing that then, and figuring out a way to seal what my lid cannot cover with the breeder boxes attached. Do you find that the Pothos still has an effect on nitrates from the whole tank, not just the breeder box? I have a couple of breeder boxes already, but the water circulation is so slow I can't imagine it making much of a difference.


Rivieraneo said:
Here's what I use:
Click to expand...

Thank you Rivieraneo, I already have one of those breeder boxes, the other one I have is run off of an air pump. I may take one of them and convert them to a Pothos Planter for now, and order more for the rest of my plants. Any suggestions as to how I should cover the space that those will take up so the snails cannot escape? Thanks!

Sheena-Phx said:
Thank you coralbandit, I may end up doing that then, and figuring out a way to seal what my lid cannot cover with the breeder boxes attached. Do you find that the Pothos still has an effect on nitrates from the whole tank, not just the breeder box? I have a couple of breeder boxes already, but the water circulation is so slow I can't imagine it making much of a difference.
Click to expand...

My pothos are for decoration .
I change enough water to make them useless in tanks water parameters .
Just like the look of plants in the fish room.

Location
SE USA - not quite in the middle of nowhere, but d

Plastic craft net used for needle work comes in squares. Between it and duct tape, you can patch any open spaces left by the breeder boxes. Look at the craft section of Walmart or any hobby store.
OP

Thank you coralbandit, good to know. I just can't seem to keep my nitrates down, no matter how many water changes I do. My single Oranda in my 55 gallon with a 75% water change weekly still sits at 40-80 in Nitrates. Ugh. I'm holding off on getting the other 3 goldfish I want until I can miraculously balance my water. Lol.That's why I'm trying to benefit from the Pothos in that tank.

maggie thecat, thank you for that suggestion. I think I know the material you are talking about. I will have to check Walmart the next time I go. Great idea. Thank you so much!
Share:
Facebook Twitter Reddit Pinterest WhatsApp Email Link