Would like some advice on what to expect while breeding bettas.

I have a male and a female betta that I have put for breeding. I have followed the same instructions and methods that most breeders use but for some weird reason, my bettas are not spawning.

After I released the female ... there was the usual chase between them for three hours or so, the female is under the bubble nest close to the male, they are rubbing each other but for some reason, they are not wrapping. Any ideas as to why they are not able to spawn.

The male and female are pretty much the same sizes. They both are around 3 months of age. It is the first time for both of them. They both have been in the tank for around 14 hours now and haven't been able to spawn. The male and female are just swimming around and not really attacking at this point. Should I leave the female for another night with the male and check again in the morning or is it too long to keep them for another night?

3 months sounds a bit young to be breeding them. I would wait another month before trying to breed them. Here are some thoughts to consider before you try breeding them. Are they pet store bettas? Do you have all the necessary supplies for breeding and rearing up to hundreds of fry (live foods, equipment, a bunch of jars, etc...)? Can you sell or rehome them all? Are you prepared to cull (kill) any deformed or weak fry? Did you condition them before breeding? Is the female very big and round? Is she showing breeding bars? Can you do large water changes everyday after the fry are larger? I see you don't know about the nitrogen cycle and that's very important when keeping any fish. 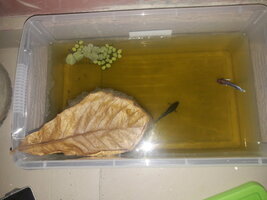 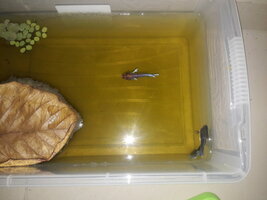 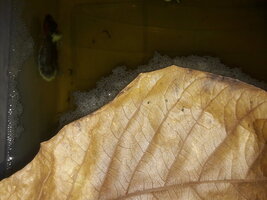 Thanks for your message. I got them from a breeder in Thailand. I had them for a month and have been feeding them frozen bloodworms and brine shrimp. The female has a big belly and her egg spot is very prominent too. I clean their tanks every third day and condition them as well. I couldn't see the bars very clearly. The female is the dark one pictured. Thanks for sharing the link to the nitrogen cycle.

Separate for a short period and reintroduce them to try and get a successful spawn. My first spawn the male danced around like a dork trying to impress the female as she chased him around trying to get him to pay attention. She went to the bubble nest and told him to stop dancing to wrap with her with a nip to his side, within a few minutes they were doing their first wraps/embraces.
Do not let them see each other during the short separation (one to two weeks at most before a second try), sometimes they do not know what they are supposed to be doing.

Greetings Mcasella,
Thanks for your message.
lolol @ dancing like a dork. Well my male and female were behaving in a similar manner too. Thanks for the insight.
I separated them today morning and like you say will Introduce them in a week or so and see how it works out. Thanks.