So I have a 75g and 90g hooked to a 120g stock tank sump... I’d hoped this sheer water volume hold up to the bio load of my spiny box puffer and catfish ... the bb does it’s thing but I’m always chasing nitrate and phosphate levels... and of course never ending algae scraping.... mostly in the 90 with the puffer and cat. Since these guys eat everything but urchins ... my clean up crew is non existent.
I happened to go by a lfs I hadn’t been to yet (sandys in Louisville KY if you’re in the area place is pretty darn cool) and they had “softball” sized bunches of cheato for $10. I say “softball” because the handful was very generous.
I stopped by dollar tree and got two baskets to hold it and decided I’d put one in my DT and one in the sump.
I’d been trying to grow mangroves and algae on knitting backing under a cheapo grow light and the algae never took off and mangroves obviously don’t grow very fast, so aren’t pulling the nutrients out of the water I’d hoped for.
I’m hopefully the DT lights atleast will speed growth if the cheato there.
I have the return line blowing into the basket in the dt so it has tons of direct water movement, my sump has two sunshine powerheads and an in sump skimmer that give it a gentle circular current.
Any suggestions, besides upgrading grow lights in the sump that’s on the to do list? 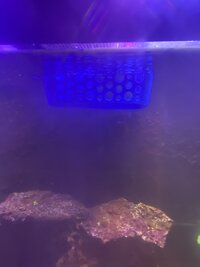