Too Many Otos. How Many Do You Think Might Work In A 29 gallon? Question

Beautiful, I love to see Oto’s kept in large groups that’ll keep me smiling for the rest of the day

Did you keep them all jen

I think mine caught me watching your large herd & decided they needed more mates, this time I’ve evicted the tetras so hopefully some fry make it.

please upload to youtube, there aren't enough videos of authentically bred otocinclus around!

Hi all! A long overdue update on the otos in the 29 gallon:

I took the advice given and kept them all. To my knowledge, I've lost only two since August. One got himself stuck in part of the filter and I don't know why the other passed away. The rest seem great. Full bellies, playful, and coexisting well with their tank-mates. They're not often out en masse but there are always some swimming around the tank, and they make a good group showing after water changes.

My biggest concern had been keeping them fed but it really seems not to be an issue. I throw in some blanched zucchini and/or algae wafers a couple times a week and add some Bacter AE when I think of it (not often) but I think the plants and tank surfaces are providing well for them.

I might try to breed them again by segregating a few back into a 10 gallon. I'm curious if it was a one time surprise of if they really like my water. My LFS owner is very interested in how this happened and is eager to buy some if they spawn again. (They might be breeding in their tank now but I'd never see any fry with the pearl gourami and barbs.)

A pic of the tank from today is below. You can see one of them on the front glass.

I'll try to capture them on video the next time they're doing something interesting. 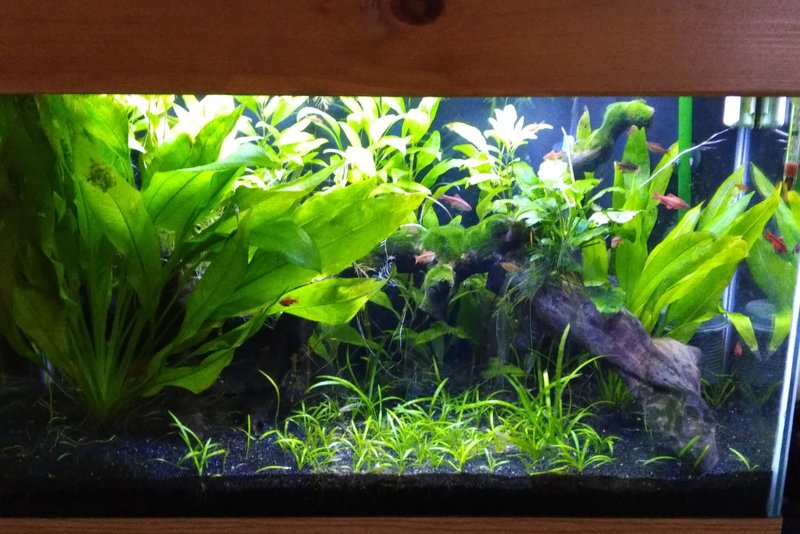 I uploaded another video and made it public in YouTube so others can see it. Thanks for the suggestion.