Intro: I have two new Nerite snails, one horned Nerite doing ok, one tiger Nerite obviously doing poorly. Looking for any advice on caring for it, and making sure my other Nerite does not succumb to the same fate.

*What species is your problem related to?
Nerite snail

Note: I completed a fishless cycle over the course of January, but my nitrates have been reading lower, and now 0, since the introduction of more plants. I know plants use nitrates, but I'm not sure if these kinds of readings are normal.

Size? 5 gallon
How long has this tank been set up? 6 weeks


What is your water change schedule and%?

Was doing weekly 25% until introduction of snails. Did 75% change with deep gravel vac on Wednesday night. (After an uptik in detritus worms). Also rinsed out filter floss cartridge for the first time (in a container of tank water).

What do you feed and how often?

So far, I've given the snails half of one blanched spinach leaf, which two of the ramshorns chowed down on (I vacuumed their poops). The tank was heavy on algae when I added the snails, so I have only just started supplementary feeding.

Do you add any chemicals? (water conditioner, fertiliser,meds etc)

Substrate?
About 1inch gravel (regular inert) -- I have added a little bit of depth in one area now, thinking maybe I don't have enough substrate to support ample bacteria growth.

Introduction to the Tank (if applicable)

How long has the invert been in the tank?
8 days

How did you acclimate them?
Bag method, diluting over about 30m
(future inverts will be drip acclimated.)

Details:
I woke up Saturday morning to find one of my nerites "dead"- turns out it is still alive, just doing very poorly. I think the main source of stress is an ammonia spike (up to .25) but I don't know what else is going on.

The sick Nerite I intially looked healthy, but its foot shrunk up and seemed to form a growth around the outside of it. It shrunk up quite small before the snail detached from the aquarium glass.

When I picked it up, it didn't move, but I put it in a cup and eventually it reattached to the surface.

This Nerite, which initially seemed to be dead, has crawled a few inches on a couple different days, seeming to be feeding. But its foot is still small, and it seems extremely lethargic and unhealthy.

When I checked on it today after a water change its operculum was closed, which I took as a somewhat good sign (it seemed unable to close it entirely the other day). But now it seems unable to suction onto a rock. :'(

I've been doing daily water changes but I don't know what else to do for it.

The other Nerite has been hanging around the top of the tank, but has seemed more active (and I've caught it moving around the tank at night) since the water change on Saturday.

The ramshorns seem totally unperturbed. They are cruising around, eating, growing, and even mating.

I'll attach some photos of the sickly Nerite. 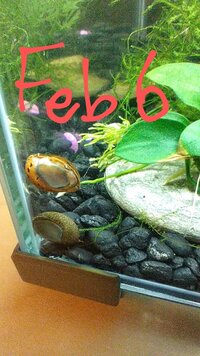 First day in the tank, you can see the tiger nerite's mouth and eyes out.(seems healthy) 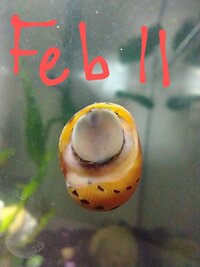 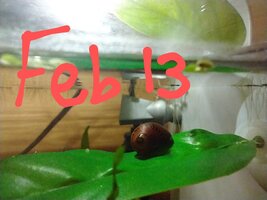 feb 13, several hours after taking the upsidedown snail out, it is placed back in the tank, on a leaf for observation. (A couple hours later it had left the leaf) 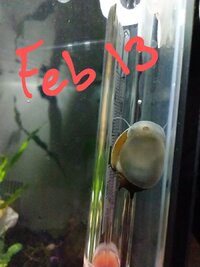 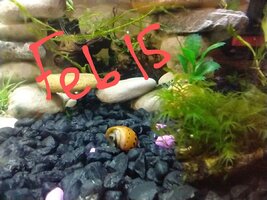 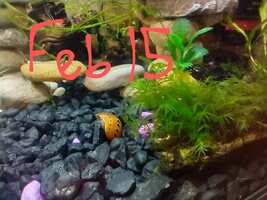 What happened to my tiny son?

Was he just weaker than the other snails, and succumbed to ammonia poisoning? Does he have some kind of fungal infection (the dark fuzz)?

Could it be that I don't have salt in my water?

Any insight and advice is appreciated! Thanks for taking the time to read.


( I am ordering test kits for gh/kh and copper, and taking steps to improve biological filtration in the tank. Not sure what else to do, but I want to save the other snails!)

if heavily planted, it should be fine

nitrates - use Prime every 48 hours, stop the cycle of up/down nitrates which stresses out the tank and tank inhabitants

you want smooth sailing and no Hi-Lows, think like sugar spikes & insulin. The spikes are what kills you. The body's equilibrium ( Homeostasis - what a living organism strives for and fights for daily ) gets taxed until exhausted. Prime will prevent that.

if I was a dog, i'd be mad if I only ate kibble

I supplement foods for all my dogs and fishes.

peel cucumber, slice thin. i freeze mine and defrost in tap water.

Italian green beans
regular green beans ( cut longways, so it won;t float by trapped air)
peas
broccoli
kale and yes I do feed spinach too
there's a ton you can feed.

snail jello - I have hello kitty rubber ice tray I use for it so it comes out in shape of hello kitty , lol. really easy to pop out. just cut it up since your tank is only 5 gallons.

the tank is only 6 weeks - not much biofilm. i'd add either 1/2 or 1 whole algae tablet a day.
if worried about your snail, put him directly on top of it so he knows where it is.


sorry to be verbose, it's my nature

Thanks for the 'onions,' Debbie!

This is a situation where I was not sure if I was doing too much or too little. (Especially regarding the antiseptic.) Now I know! I will dial back and focus on stability in the tank for now.

I also appreciate the food suggestions! I have a couple of those veg on hand, so I will try some of those (not all at once!) While I wait for some snail food to come in the mail.

Thanks!
Upvote 0
You must log in or register to reply here.

How much should I clean my nerite snail poo?