I rescued this fish a week back, and I was told it's a Tiger Loach, but it looks like a Zebra Loach to me (after trying to research them a bit more, to see if I need to get him some friends).

It looks nothing like a tiger loach; shape wise it is similar to my zebra loach but the pattern is a bit different and mine have no white on the belly (stripes go all the way down) but i found pictures not dissimilar to your so perhaps it is a region or age thing. Still I have my doubts but maybe A201 or Redshark1 know....

Thanks Linda1234 I just want to make sure I do right by this little guy, and there is a considerable maximum size difference between tiger loach vs zebra loach.

I can probably accomodate some zebra loach friends, but not multiple tigers.

Looks like a Zebra Loach, B. Striata.
Here's a pic of my Tiger Loach for comparison.

Excellent, thanks A201 ! I'll see if I can find somewhere that sells them to get him some friends, as it looks like they should be in groups of ~5 or 6.

I want to stress the pattern is very different than my zebra loach and none of my 10 zebra have white on the bottom; but it could also be stress marks. I'd wait for someone else to respond before rushing off to buy more. The ones pictured on loaches.com is a bit closer to yours. I have two set one set of 5 i've had for 2 1/2 years the other is a bit younger; so i'm not sure it is an age thing. I will say they are delightful fishes though at times they will hide a bit but they are quite a bit quieter than many other loaches and very peaceful. I have a couple that love playing in the jungle val.

It might be a very young Golden Zebra. Either way, both species are
not boisterous or aggressive. A mixed group should pose no compatibility problems.

I'm quite certain it is not gold zebra; young gold zebra are yellow and look a bit like young yoyo.

I want to stress the pattern is very different than my zebra loach
Click to expand...

Do all loaches have the red lip? Looking at the pictures on loaches.com, mine has the exact same colouration; that makes it look like it's wearing lipstick .

none of my 10 zebra have white on the bottom; but it could also be stress marks.
Click to expand...

I just had a closer look at him/her, and he does have very faint markings on the bottom which, now I know they're there, I can actually see in the pictures I put in the OP.

I wouldn't be at all surprised if they are stress marks; the poor thing has been transfered from his tank -> my QT -> his new 130 litre home, all while being on his own and should have been in a shoal of at least 5.

I'd wait for someone else to respond before rushing off to buy more.
Click to expand...

I will say they are delightful fishes though at times they will hide a bit but they are quite a bit quieter than many other loaches and very peaceful.
Click to expand...

I was actually presently surprised when I moved him to his new home yesterday. When he was in my QT, he was constantly hiding and I barely saw him; now he's pretty much always out.

Note: I know QT are best having nothing in, which I'm addressing now, but it was due to be a permanent home for some Corys, so I had to make them comfortable.

Either way, both species are
not boisterous or aggressive. A mixed group should pose no compatibility problems.
Click to expand...

Not all loaches have red lips; many of my zebra have it but not all (or at least not all as deep). I was told males have it but I'm not convince it is a sex indicator.

Thought I'd provide a quick update; I got him six new friends and his colours have completely changed (got a lot darker and go all the way round his belly).

I suspect he was stressed, being on his own, and now he has a shoal he is happy and his colours show it. 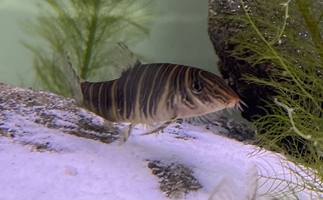