Member
Now when I was a kid, I was always rootin' around in the ditch behind my house and in the little canal that came off of the river, and I always would catch frogs, turtles, minnows, and generally anything I could. We had a tank that I would keep these 'fine specimens' in, mind you I had to of only been like 7 or 8 years old, and I would generally take whatever I caught and keep it for a few days, feeding it and watching them as my pets, then letting them go a few days later (generally when my mom said they started to stink lol).

Several years passed and I got very into fishing. Not tournament or anything, just something to do and chill out (I am kinda an old man at heart). And I see all these videos of people keeping Largemouth/Smallmouth bass, pike, bluegill, and all the common species of fish you think of in North America. I am from Michigan, so when you look up native fish you really don't find much, but something really got me thinking a few years ago. My friend and I were out catching minnows for a fishing excursion, of course we are too cheap to buy them, plus whats in the lake your fishing at is better anyways, right? We caught this fish that I had never seen anything like it. It had a body shape of a Round Goby (Invasive in great lakes, basically wreaking havoc on local fisheries) and was very, and I mean very colorful comparatively to any fish I have ever seen in this state. I did a little research on this once we caught him, and turns out it was a rainbow darter! Odd because the most northern on Wikipedia they are reported is like 2 hours south of where we were fishing. I was quite intrigued, but as someone not keeping fish at the time, he became bait.

Fast forward five years to just about a year ago when I discover I love fishkeeping as a hobby. I always found it quite odd that there were fish I would see sometimes in the creeks and such that just aren't on any species lists provided. I still fish for sport, but not nearly as much since I have college and moved, but I was just up north checking out a little outlet where Salmon come into to spawn about this time of the year. Whilst there I saw little fish (no Salmon yet) swimming around, your general minnows, but I couldn't help but be attracted to these little fish that scoot around on the bottom. I have never seen anything like it. What would any logical person do in this instance? Of course I am not logical. My immediate reaction was to get my bucket (I go everywhere with a 5gal bucket and lid in my trunk in case of fish deals) and I catch some of them. Eventually I resorted to the foam gas station soda cup to catch them. Unfortunately I did not have a net, otherwise I would have gotten a whole colony practically, but after about 45 minutes of my hands in 50F flowing water, we pants, wet feet, and crouching to catch these fish I managed 6 of the little buggers. Now this may be a bit controversial on whether or not I should do this, I even debated to not keep them, but I honestly love them.

I have been doing research on this fish I caught and I cannot seem to identify them as a specific species when using a list of Michigan fish (created by professors at University of Michigan) I know it is part of the Percidae family, or in English Darter family. I am thinking it may be a Johnny Darter, Least Darter, or a type of Fantail Darter. Regardless I think they are really cool and their movement is like a very active bumblebee goby, but not territorial, more communal. I keep them in a 5.5 gallon tank and they really eat anything I feed them. Flakes, frozen bloodworms, anything that drifts mid water column pretty much. I do plan to go back and catch more, as if I could feed them well and upgrade them in tank size/shape and hopefully I could attempt to breed them. Probably won't work, but who knows, can't hurt to give them attention and a great living situation. They are in an unheated tank as I caught them in water <60F so I figure a heater isn't necessary. They are from a shallow river, I caught them in water between 2" deep and 1' deep, so I could walk a crossed the riverbed. Also they from a rocky river bottom over sand so hence why this is the way I put the tank together. I plan to add more rocks to the tank for a better environment for them. Overall I think they are a great fish, super active and really cool to watch. Super easy to care for as well. I will include images of the collection point (found it on a website as I did not take one, but next trip I will), and of the fish in the tanks setup.

If anybody else out there keeps native fish, any input would be cool! Any feedback on this would be appreciated as well! Thanks for reading!

Collection Point/River: It is the Grand Lake Outlet in Michigan, off of Thompson Harbor Rd - It is a state park, but in the fishing guide, the DNR has no restrictions on this area, and for the record I have a recreation passport and fishing license. 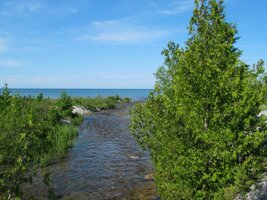 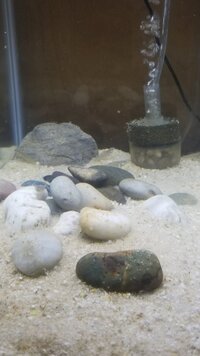 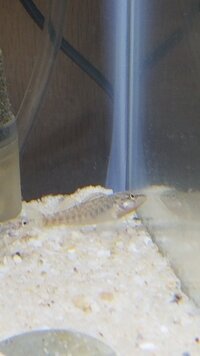 Member
Native tanks are fantastic! I’ve always wanted an aquarium full of rainbow shiners. Kind of weird how people like rare things- bait fish in the US like minnows go for an absurd amount of money in China, and fish that would be found on a dinner table in Asia go for hundreds of dollars in the States.

Member
One of my favorite aquariums growing up was the ones the guy at the tackle shop kept. Always had a couple bullheads, crayfish and a crappie and bluegill in thise things. He would usually toss a few minnows from his bait tanks for food.
You must log in or register to reply here.
Share:
Facebook Twitter Reddit Pinterest WhatsApp Email Link
Top Bottom