I got several empty tanks, a lot of dragon rock that I just smashed up yesterday, and an itch to build a paludarium for a freshwater crab or two. I even know the look that I want to go for: 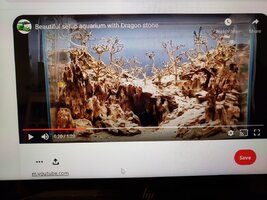 The water would be only fill a third of this scape rather than submerse it entirely.

Now, the only question is this: do I build this as a 10 gallon, or a 20 gallon long?
I don't exactly have a surplus of material, so the 20L would be stretching my resources a little thin, plus I'm not 100% confident in my ability to translate this idea to a tank with very limited vertical space compared to its length.

Furthermore, I'm hoping to begin consolidating my various tanks soon. I have a 10g that is currently in use as a shrimp tank. I'm planning to move the shrimp to a 29g, so that former shrimp tank could become this paludarium.

On the other hand, "bigger is always better." Cleanliness and stability isn't a problem for me usually (my smallest tanks are choked with plants that keep things stable) but the extra space might... Well, I don't really know, make the crabs more happy? It would at least allow for a larger number of crabs or other fully aquatic livestock, although I'm more interested in making a scape that I'm pleased with and can support at least 1 crab than maximizing stocking potential.

Why not use to 20Lo but don't scrimp on the reef, do it as you want then leave it fall away to to the ocean floor where the reef ends and sand bottom takes over
A few small amount of plant can be placed in the sand just to break the sea bed or put odd patches of stone where the reef breaks through,
You must log in or register to reply here.