Taking on my friend’s sick betta - updated with pics

bettafairy
Member
My friend can no longer care for her betta fish and is now taking him to me as her last option as she’s moving and his health is declining. He has bad fin rot, and is over a year old. She’s giving me all his tank supplies, which includes a 6 gal tank. I was wondering any alternatives to fin rot treatment besides bettafix as I’ve heard some bad stuff about it. And anything I can do to help with stress during transportation, I’m driving up to her city today to pick him up. We are going to put him in a small 2-3 gal holding container for the car ride, but I’m worried the stress will be too much.
SouthAmericanCichlids
Member
Salt! It heals almost anything.
bcsay720
Member
You could begin salt treatments, but I'd do heavy research on them first from multiple sources, because they need to be very strict with labyrinth fish. You could also turn his tank blackwater with alder cones and/or indian almond leaves. I actually like the cones more. They seem to leech tannins longer than the leaves and develop a beneficial biofilm. Give his water a good 25-50% water change every other day, too. Light tannins did nothing for my betta when he was stress-biting his tail and gave himself terrible fin rot. His body healed, but he would hurt himself all over again. He didn't actually start recovering mentally and stress-wise until I converted his tank to full blackwater.

As for transportation: there's not a lot of ways to destress. Just make sure he is in a container with an airhole and in a spot of the car that he won't slide at all. If my 4.5 year old, blind betta could make it in a 4 hour car ride home from college a few years ago without dying, then you may be able to get this guy home safely.
Salem
Member
Personally I have always used aquarium salt in the form of baths to treat it. The general idea is to prepare a small container of water and add an amount of salt that normally would be far too much for the betta to stay in long term, then move the fish into it for 5-8 minutes or so before returning him to his tank. If memory serves the amount for a bath is 1 tablespoon per gallon of water. Generally you won't want to do this treatment for more than 10 days, if after that point there is no improvement you'll want to look back into medications.
Medications I have not personally used but have read a lot of positive experiences specifically with bettas include Maracyn II, API Furan-2, and API Fungus Care.
In addition you'll likely want to do a lot of water changes to keep everything as clean as you can without throwing off the cycle. If the tank has gravel you will want to vacuum it as lots of detritus and gunk can accumulate under it. You may want to also rinse the filter media [or sponge] off in dechlorinated water every so often.

I also like to use catappa or indian almond leaves and alder cones as bcsay mentioned. There is research that suggests it has anti bacterial properties in the tannins though I don't have the actual papers on it on hand at the moment. Personally I use it more so because I like the aesthetic of black water tanks and find that my bettas seem more relaxed in them. I assume it has to do with feeling more hidden in the dark waters but that is purely anecdotal though.

I have read about cases where the finrot is so severe that people opt to physically cut off the damaged fins. I myself have tried this with my last betta Lazarus as he seemed to have some sort of chronic extremely slow progressing rot his whole life. It was a last ditch effort after trying many medications and salt baths for a week every other month. I would not recommend this method to anyone who is not extremely confident in their abilities and knowledge though as it is quite an intense thing for you and your fish to go through.

Best of luck to you and your new little friend
bettafairy
Member
I posted about this situation regarding taking on my friend’s year old betta, who has very bad fin rot yesterday, and got amazing advice and instructions on administering a salt bath, and using almond leaves in his new tank. However, I now have photos of the little guy, and updates! Poor Apollo had his first salt treatment last night, and although everything was fine for him I was very anxious the whole time. Gladly his behavior has perked up significantly, he has eaten daphnia, and is swimming actively. I quickly established a 6g planted tank for him, using some of his old water and some water from my current betta setup, along with water filtered with prime and added almond leaves. He of course has a filter and heater. Hopefully this helps his fins and scales, as my friend’s water quality was very poor. I’m wondering if anyone has any idea how long healing his fins will take, and if I should do another salt bath in a couple days, or give him a rest since he had a long drive from his old home. I also want to know if I should have any hope for his top fins as they are severely damaged. Attached are pictures of Apollo, and his setup. She forgot to give me his light, so for the time being (until she comes down to give it to me) I’m using a small non heated lamp for his light source. 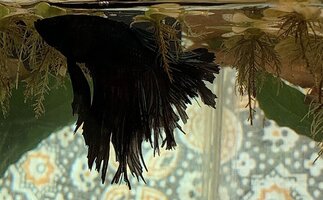 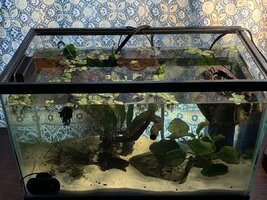 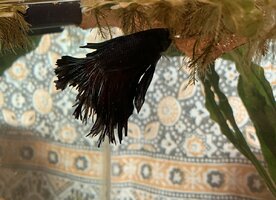 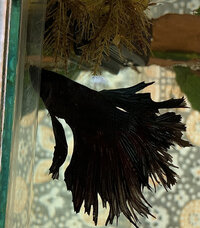 You must log in or register to reply here.
Similar Aquarium Threads