I have a catfish (named Alistair) in my 55 gallon that is something of a mystery. I got him from Walmart (bad idea, I know...but I couldn't resist!) back in November. When I got him, he was *maybe* 1" long. This is the best pic I have of him: 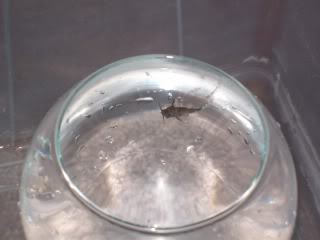 He was sold to me as a "small pleco," but later I went back and they had ones similar to him that were labeled as "synodontis lace cats" (and they were more expensive than the small plecos). On another forum, Alistair was identified as an "upside down catfish," but with the wild coloration. I bought that...until now. He is now about 4" long and looks EXACTLY like the featherfin catfish that are sold at Petsmart. He is rather reclusive, tending to stay behind the massive pieces of driftwood in the tank, but every once in a while (usually in the evening), he'll patrol the whole of the tank. He swims right side up more than he does upside down (the most "upside down" he gets is when he swims along the slightly past vertical side of one of the bigger pieces of driftwood) and he generally feeds on the bottom. I have seen him flash up to the surface (not like Vladmir, my albino cory, does, but more like my platies do when they're hungry), but it happens VERY rarely. I don't have a current pic of him (as I said, he is VERY reclusive and prefers to stay to the shady areas of the tank), but he doesn't look like any of the pics I can find of upside down cats or lace cats or even featherfin cats. Any ideas what he might be? Like I said...he looks EXACTLY like the "featherfins" I've seen at Petsmart.

Not without a better picture, unfortunately.

You could try looking through the Synodontis profiles at PlanetCatfish and see if anything looks familiar:

For the featherfin in particular, it's this one:

Take THIS and make it 4" long, with a thicker body (this little guy is from the featherfin profile you linked me to)! lol

However, THIS is what he looked like when he was a baby (from the synodontis nigriventris, or upside down catfish, profile onplanet catfish).

Synos can hybridize, as far as I know, so finding an exact match for what you have might be tricky.

Hehe...I always knew Alistair was special! I really wish I could get a decent pic of him, but he is so reclusive. I have seen him twice in the past week...and like I said, he's at least 4" long, so it's not like he has a TON of places to hide.
You must log in or register to reply here.
Share:
Facebook Twitter Reddit Pinterest WhatsApp Email Link
Toggle Sidebar