Hello everyone! Today we bought two long finned leopard danios to add to the tank and we noticed that we accidentally had a tiny tag-a-long in the bag! We assumed it was a baby danio but on closer inspection it doesn't look like one. What convinces me it's not a tiny danio is that the tail is rounded and not split.
Any ideas on the species of the little guy? 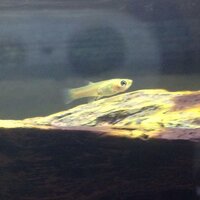 Looks like a young Platy to me. Not sure on what type.

Could be a Molly, also. I think guppies normally have a more curved tummy at that size.

I also say molly or platy.

Thanks for the help. I've got six other medium to large size danios in the tank with him, do you think he'll be alright or should I separate him until he gets bigger?

As long as he won't fit into the danios mouths he should be fine. Give him a nice bushy plant to hide in so he'll be a little more secure.

Not a Platy. Either a molly or a guppy.

So it's a live bearer. I guess you'll find out what kind when it gets bigger

if its not a platy then its a molly, def not a guppy.
OP
J

We asked the fish store we got him from and they said he's just a feeder guppy. They told me to just toss him down the drain but I can't imagine doing that so we'll just try to keep him alive. He seems to be doing fine, even though the bigger fish are bumping him around a little bit. Mystery solved!

The tail is nothing like a Guppy though... Guppies have large flowing tail fins, I know it's young but wouldnt the tail be bigger than what it is???

Not on a baby

A fish shop told you to put a fish down the drain. Just a feeder guppy.

This is an easy one. It's a Livebearer.

Fish stores often get color less female guppies in with feeder minnows (.15 a pop) they probably assumed you didn't want it and were saying it's not worth the hassle of selling or donating back to them.
I always cringe when people ask about using feeders to cycle the tank because they ask "what do I do with them after?" And I have to say "well, if you have a pet that eats fish you can feed them to it, or just... Flush them... Because most stores really aren't going to want a feeder fish donation. Or are literally going to just toss it in with the turtles..." Gosh that's a hard one to tell people...

I was pretty shocked when he said to toss it, but I understood why he would say that. We're going to watch over him and hopefully he has a calmer life than he would as food haha

jinnix said:
I was pretty shocked when he said to toss it, but I understood why he would say that. We're going to watch over him and hopefully he has a calmer life than he would as food haha
Click to expand...

Yeah. I just don't want this to ruin your fish store experience, you know.

kidster9700 said:
Yeah. I just don't want this to ruin your fish store experience, you know.
Click to expand...