Hi guys. Tommorow I'm going to buy a 1 gallon tank for someone for $4!! It comes with an air pump unfortunally, but I want to know what knid of heater and filter will be good for it. I'm only using it as a quanity tank and I'm really excited. ^^ so can anyone help me out?

Heres a filter I've used before.

It's almost impossible to find a heater that won't over heat a tank that small.
what's a quanity tank?
what is going into the tank?
Carol

I use the Small World filter by PennPlax in my 5 gallon. It's kinda like a sponge filter in that it's powered by an air pump but it also has a carbon part and doubles as a bubbler. I got them at Petco.

Oops I mean Quarantine tank or something.. I'm going to do a fishless cycle on it but I do not know where I suppose to get this pure ammonia and I'm a little confuse how to do it even I know what it is and what are its benifits.

Unless you're keeping very small fish, a 1 gallon is too smal for a quarantine tank unfortunately. Most people don't keep their Q-tanks up and running all the time; they keep extra filter media in an established tank and move it to the Q-tank when they set it up. An alternative to an aquarium for a Q-tank is a large Rubbermaid bin, you could probably get a 6g or larger for less than $10.

Guess what, The guy gave me a deal. So now I got 2 tanks of the same size and they are actually not 1 gallon tanks. They are actually 2 gallon tanks for $5( I added water on one of them with a gallon jug and it only filled half way. It's still small). Here's a picture of both tanks. They didn't have the 20 gallon anymore because someone bought it already, nor the guy did not find the airpump to one of them. It was $5 too, but light and filter that came with the 20 gallon were also $5 separate. So, if I would bought the 20 gallon instead, everything will be $15 and I don't have room for the 20 gallon, only the small tanks. I might just used one of them as a fry tank and the other one I do not k now. lol I wasn't expecting getting 2 tanks.: 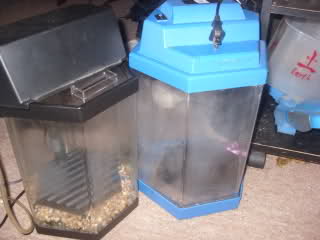 I should put this in my blog but oh well.

And I need help identifying these 2 items. One of them supposly for the air pump thing but I don't know now.. This is all I have form both tanks..: 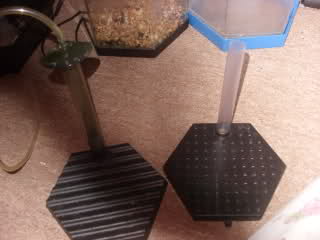 They're under gravel filters. The plates sit at the bottom of the tank and the gravel goes on top.
Personally, I don't like them Gunk can collect under the plate pretty quickly.
It might jot get so bad if you're using it for a short Q time.

Well I'm going to use one of them either as a fry set up or to put my male platy in there. The other one my sister is going to keep.

I wouldn't keep anything but a betta or shrimp in a tank that small.

What about just fry?

konstargirl said:
What about just fry?
Click to expand...

Fry are more sensitive to water quality than adult fish, so while they would fit in it for some time, I think it'll be difficult to keep them alive in it.

Well they are doing just fine in there tiny nursery as of now,but there older sibling which is a month old keeps chasing them. and the majority of them are a day old and 6 of them are a week old.
You must log in or register to reply here.
Share:
Facebook Twitter Reddit Pinterest WhatsApp Email Link
Toggle Sidebar