So after 4 long months of setting and cycling my tank I finally felt my tank was ready to become what I intended it to be.
Up till now I had platies in the tank to cycle and prep it but this morning I returned them to my LFS (was always the plan from begining and they specifically told me to cycle with these before moving on)
Welp so now after going and looking to make sure I was sure sure on what I wanted amd to make sure they had what I was looking for I brought home my new babies....

Ive added rocks for caves etc.
Please give me your opinions as I'm hopeing I didnt just make a mistake 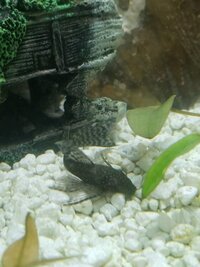 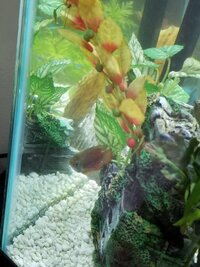 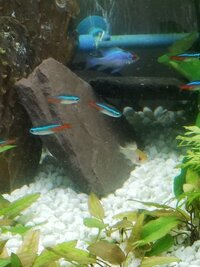 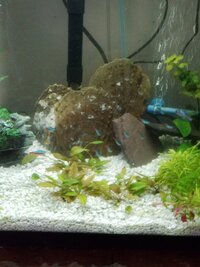 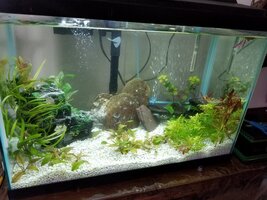 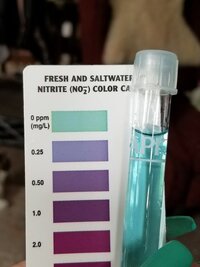 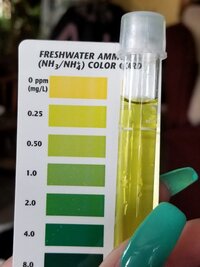 Looks good.
What's your water changing schedule and how much are you changing?
Your tank is on the verge of over-stocked, so make sure to keep up.
OP

The more I look...I'm not sure they sold me a pearl gouramI or a dwarf powder blue .. not sure it matters personally to me as its beautiful, and the rams are what I really was excited about, but maybe someone can confirm 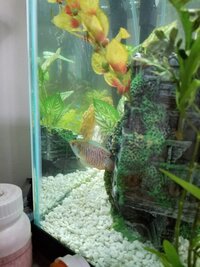 Cool. How many Neon's did you say you got?

And 4 months! I'm only on my 2nd week. How ever did you make it through?
OP

I have 10 now......it was hard to be paitent and I'm STILL waiting because my next tank I'm planning is going to take 2 or so months to cycle empty as I want a puffer

Yea that is a dwarf gouramI [maybe powder blue ?] .
Keep your tank at 80F minimum if you want your EBR happy and healthy . 82+ would be better ..

Exciting! However I believe you may have a small stocking issue if I may....and with respect

First of all they definitely sold you a dwarf gourami. Infamous for having the incurable dwarf gouramI disease that will inevitably kill them. (it's not contagious) Some say as much as 30% of DG's have his disease. Dwarf Gourami's are beautiful but are can be aggressive little stinkers. Some can be peaceful though and have no issues. A dwarf gouramI is a better size fish for your 20 gallon instead of a Pearl GouramI anyways.

Second of all what kind of pleco did they sell you? If it's a common Pleco you'll need to return it as they get over a foot in length. Fully grown they need at least a 125 gallon tank. The only commonly available Plecos that will work in a 20 gallon are bushy nose plecs or clown plecs.

Lastly, and this is mostly my opinion. I wouldn't do an Acara let alone a pair in a 20 gallon. They get 6-8 inches. That's a big fish for a 20 gallon. I'm sure it can be done but it's not ideal. A quick google search about EBA's shows most sites recommending a minimum of 55 gallons for an EBA.

Not trying to be negative or a bubble burster! Just hoping new hobbyist enjoy the hobby instead of winding up with a bunch of headaches.

OP has rams not acaras ..
You still have time to edit !
OP

...I got rams....they should only get 2 inches max I believe
The pleco is a long fin of some kind that max is 6 inches I was told and LFS will take him back if he out grows my tank . Even though I will be moving to 55 gal eventually


Add: its a long fin bristlenose

Aw shucks I missed my editing opportunity. Could have sworn I read "Acaras".....Well in that case that's great! Ram's should work out nicely as long as spawning aggression doesn't start up. As long as your GouramI doesn't have DG disease and doesn't become a nuisance I would keep him...... and hopefully you were sold a Long Fin Bushy Nose Pleco. If that's the case you're good to go! I would be sure he's not a Common Pleco. They get HUGE.
OP

DG disease, guess I wait an see if he does develop it then after he passes I suppose ill have to figure out another passive fish to add

Odds are he doesn't have Dwarf GouramI disease but just keep an eye on him.
OP

this morning everyone is happy and swimming around and the rams ate, which I was a bit concerned about as I heard the stress may stop them from eating, so I was pleasantly surprised to see them eat last night. Their color is coming out nice too. I'm pretty positive they were sexed correct. The female chases the male then the male chases the female, then the will come back together and swim near one another. I'm hopeful that they at least like each other. 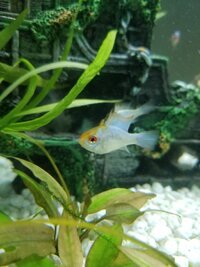 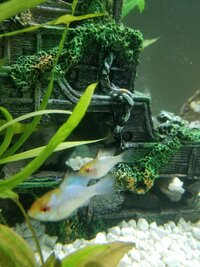 Pretty sure the front is male

Your aquarium looks very nice.
You may want to either put in a background of some sort, or aquascape to hide the mechanical elements---wires and hoses etc. but that's part of having an aquarium-- adding and removing things and making improvements.

You will like the Rams- they have interesting personalities and behaviors. They are one of my all time faves.

Nice to hear someone taking the time to prepare a tank for the arrival of fish. Congrats! Good looking tank.

For some reason, I also thought you had Acaras rather than Rams...which would have been a bit of a disaster waiting to happen. Glad I read it wrong.

I also agree that you are fortunate to have gotten a Dwarf rather than a Pearl Gourami; another potential problem averted. Same with the Bristlenose rather than Common Pleco thing. I'm thinking you would have been better off with Cardinal rather than Neon Tetras, simply because of temperature preferences. They would be better suited to the temps you will be maintaining for your Rams.

My biggest concern is related to the store with which you are dealing. A place that calls a Dwarf GouramI a Pearl, and that recommends Neons and Rams together, doesn't fill me with confidence.

I second jjohnwm's opinion. Local fish store employees are notorious for giving terrible information to customers and over all not having a clue what they're talking about. If I were in your shoes I wouldn't trust any information you get from that store. Especially since they sold you a DG as a Pearl. Still hoping they didn't sell you a common pleco. From the pics it kinda looks like one but I can't tell. Do your own research, ask folks on here questions opposed to asking the store employees.

Your tank is looking great. Looks like plenty of places to hide. I'm assuming those are real plants? Let them grown and fill in even more if that's the case.

Good to hear your Rams are eating. German Blue Rams are some of the more sensitive/difficult Ram species to keep.... with Bolivian Rams being the most hardy and easy. Hopefully everyone keeps doing well!

toeknee said:
Good to hear your Rams are eating. German Blue Rams are some of the more sensitive/difficult Ram species to keep.... with Bolivian Rams being the most hardy and easy. Hopefully everyone keeps doing well!
Click to expand...

If and when her store bought rams fail I know a pretty good breeder in NY !
Electric blues are often not even as tough as the GBR ..It does matter with these fish where they come from .
They are sensitive to some degree but if you meet their needs first above other fish they usually do well..
At least mine do ! I try to make sure my people know these are not the best community fish ..They do need to be #1 fish in tank ...

I actually went to pet smart yesterday to get my water tested bc I needed to know my GH and KH. I told them I was currently cycling my tank and they detected ammonia obviously. They asked me what fish I had in there. I said none. And they still asked me to do a 25% water change because it was toxic to fish even though I had none and I was currently cycling it which is normal.
Share:
Facebook Twitter Reddit Pinterest WhatsApp Email Link