Hello,
Now before I tell my story my pleco change color about a month ago after it got cured from a horrible ick problem anys ways to begin with my pleco used to look like a very nice bright yellow since its a lemon male bristlenose pleco but when it catched ick , it started to not eat for a week and it would be halfway out of the surface even if I went to go check on it it would get scared and go back down, but when I would come into the room it would be halfway out of the water until I went over the check it. By the end of the 2 weeks the ick vanished and my pleco started to happily eat again and carry out its happy life again but I noticed that it has a pale color though and the bright color just seemed to have vanished I guess but the pleco is perfectly healthy and behaving normal its just I don't understand why it hasent went back to its bright yellow color not that I'm against its color change its just I can't understand why it went from bright yellow to pale next
The first picture is how I lt looked before

The second picture is how it looks now after about a month it got cured from ick
Isn't it strange? Its still acts like normal though 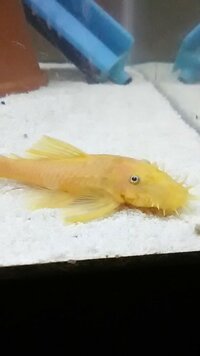 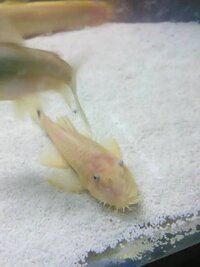 If your Pleco was a new purchase there is a possibility that it had been "juiced" (hormone enhanced) by the breeder. Juiced fish usually fade within a few weeks.after leaving the breeder.
Many varieties of Pleco require driftwood to knaw on to complete it's dietary requirements.

Whoa! I have actually never ever heard of plecos having that done to them yikes! I wonder if it hurt the fish when it happend and ive only had the pleco for 3 months and just a month ago color suddenly fades
That might be the solution for why its color changed

I do have driftwood to it likes to occasionally munch on

There are so many breeders, especially in Asia, that juice up numerous varieties of fish. Here is a pic of my juvenile German Red Peacock (Aulonocara). He was definitely juiced up. After a month most of the orange color faded. It took another three months for him to regain about 50% of the original color. 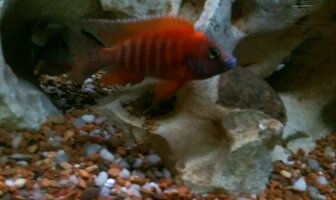 You have him on light colored substrate, fish color to match the substrate to blend in better. Place him on a dark substrate and his yellow coloring will come back.
Yes, many cichlids are juiced with hormones to bring out the color, it normally fades within the first three weeks of having them out of the hormone treated water (but they are juvenile fish, so they shouldn't be that color at that size anyway). I haven't heard of plecos being placed in hormone treated water to enhance color, seems like a waste for the most part (most colors of bristlenose will have their color at a small size).

Issue with Pleco - Ick or other?

Mar 18, 2020
TookOverMyKidsTank
EMERGENCY - Treating tank for ick, but worried about pleco in tank!