I bought a couple of sponge filters for my betta tanks as I heard they don’t cause a lot of current, and they’re generally great for bettas.
I’ve never really used sponge filters, always had power filters before this. Anyway, plugged the filters in and wow, that’s a lot of surface agitation. Much more than what my power filters could do. Both of these filters are rated for 5 gallon tanks. One of them is in a 3 gal, the other in a 5 gal.
My current betta is not being blown around or anything (only if he gets quite close to the filter output), has no trouble swimming, and is not getting sucked towards the filter. However I’m not sure about the surface agitation? There’s a lot of it. It’s basically creating waves on top of the water. And big bubbles. I don’t really mind the constant “blub blub blub” noise that this causes, however I’m not sure how great this is for bettas?
I noticed my current betta doesn’t go to the top as much for air anymore, as there’s probably tons of oxygen in the water right now. (He still comes up to the surface to eat though). I thought plenty of oxygen in the water itself was a good thing, but then I read on a site that a betta needs to get surface oxygen frequently or else it’s labyrinth organ can suffer in the long run.
Is this a cause for concern at all? Again, he’s not being blown around, it’s just the large amount of surface agitation that im wondering about. I always thought that so long as the fish isn’t being pushed around by the current constantly then it’s fine. The one downside to this is that it’s harder to feed as the food gets blown around the surface much quicker than before. He usually catches it really quick once he sees it, so I guess that’s his daily workout.

If he is not getting blown around too much, I think it should be alright. You could also buy some cheap control valves and use them to adjust the flow. That might work depending on your filter.
Upvote 0

If he is not getting blown around too much, I think it should be alright. You could also buy some cheap control valves and use them to adjust the flow. That might work depending on your filter.
Click to expand...

Yeah he can pretty much sit/swim comfortable in any part of the tank, so long as he’s not near the output of the filter. He’s not actively fighting a current or anything.
Control valves are on option I suppose, maybe I’ll consider that in the future.
Upvote 0

There is nothing wrong with the sponge. It is the air pump that is to strong for just one or two devices . I would go so far as to say ALL air driven devices should have a control valve.
If the devices are at different depths in water it fundamental to controlling the flow of air.

Many people believe a sponge filter has more biological filtration if run with a minimum of air. 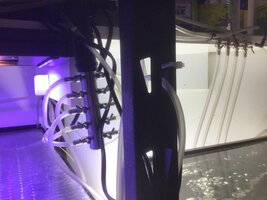 Upvote 0
You must log in or register to reply here.

May 7, 2017
SpookaSpooka
My Betta seems to be getting air from the surface more than usual.