Some changes and the end of an era

Not to be a melodramatic, but I am feeling a bit bittersweet with some changes to my fish keeping that are beginning today...

I am throwing in the towel with my 2 year Neolamprologus Multifasciatus tank. I've enjoyed the fish, but have always been frustrated with the fact that they don't breed like they seem to for everyone else. I have had fry twice and they last a few days and then disappeared never to be seen again. I even split the tank recently with the thought of trying to have a couple of young Brichardi, which I have always wanted. But I never pulled the trigger because I knew it would likely only work short-term, if at all.

So, I reached out to a local breeder that I rehomed 2 Firemouth to a couple of months ago and I will be taking them to her later today. Here's one last look at the current tank before I remove all fish and shells. 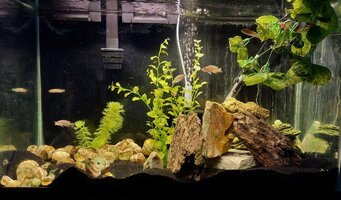 So, with emptying of that tank, there's the obvious question of what to do with the tank. In short, I will be making it a community tank. That will be fun and is ultimately what I will chronical with this thread moving forward. More on that later, but for now, I'm going to watch my Shellies for just a little longer efore they go away.

Sad to see your Shellies go, but following to see what comes next!

I keep kicking around the idea of shellies, but that may wait for down the road. Always gotta keep things interesting! Can't wait to see what you choose next

As I'm waiting for the time I need to start transferring fish and shells to bucket, I'll explain the other change...

My job has been crazy for the last 6 months and I've been traveling a lot. It's not slowing down the rest of this year at least, so I'm having to shut down part of my fleet of tanks to lessen the weekly WC burden. In all, I will likely be shutting down 6 of my tanks. All of those tanks are understocked and some have no fish, but the rest will be moving to the soon to be vacant Shelly 29 gallon. More detail to come later, but that's a little more of the plan. No more bad news at least...

As if this couldn't be more of a rough day, my car broke down while coming back from the fish rehome. We had to leave it at the side of the road because the kids were home alone with a storm coming and we couldn't get cell service to call a tow.

Got home in time to go to the basement because the tornado sirens were going off. While riding it out, I did a WC and vacuumed the substrate in the now empty 29 gallon.

Here's a pic of the tank now. 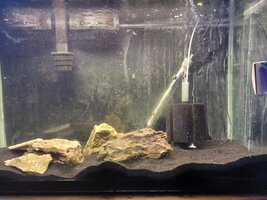 Not the worst of days, but I've had better.

Well that is a crazy day for sure! I hope the rest of the weekend is a little more relaxing.

That was a mixed up day for you. Sad to give up your shellies, but I understand why. If you can't devote a lot of time to them, and aren't getting the satisfaction from keeping them that you hoped for, it's best to move on as you did. I'm sure your community tank will give you a lot of pleasure.

I'm so happy your storm didn't produce a tornado, there have been some today and I feel so bad for what people in the south and midwest deal with. I'm near Pittsburgh and we've had small ones, and in 1985 a terrible one. I hope your car can be fixed soon and it's not too much $$ in doing so.

Better days ahead - but today you and your family are safe and that's everything!

So, the plan is to make this a community tank with my pair of German Blue Rams and some Guppies with their boatload of fry. My daughter is also going to rehome some Ember Tetras that she has and just like that, I will have a warm tank. Guppies, it seems can tolerate up to 82 degrees, which is good for the others, so that's where the tank will sit.

First things first, I have to figure out how I want to aquascape the tank. I'll have a week to think about it because I have to leave on a trip for work in the morning. I know I'll have driftwood, dragon stone, and plants...but not sure what exactly and how to make it look. I'll be scouring pictures on fishlore this week for inspiration.

Tough days there. Hope all works out. Nice you’ve got someone who’ll take the fish. Your upcoming community sound good. Add some corys . Good luck!

Tough days there. Hope all works out. Nice you’ve got someone who’ll take the fish. Your upcoming community sound good. Add some corys . Good luck!
Click to expand...

I hadn't thought much about Cories yet, bu with your suggestion, it's been on my mind. I may end up rounding out the tank with a school of Sterbai Cories as they semester to be able to handle the warmer temp better. Thanks!!

Finally got time tonight to scape the tank. The only new thing in it is a piece of driftwood that I scored from Petsmart on Saturday. Everything else is pilfered from other tanks that I will be shutting down. Here's the tank as of now... 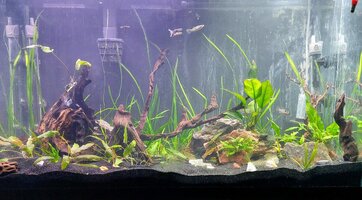 I like it, but I don't love it. I'd like to get some more tan small stones for the open area and get rid of the really white ones. I ask think I want to put more Vals around the sponge filter to cover it more. Hard to believe that all those Vals came from my little 3 gallon Betta tank and that's only half of them!

I also want to get some red root floaters and maybe some hornwort for the top. There are lights on top that are from two 10 gallon tanks. You can tell the different lights if you look closely. Better than the tube fluorescent bulb that was on the tank, but I'll want to get a full size one eventually.

I'll probably peck and fret at it this week and clean the glass in the back, but it's a good start.

The Rams have moved in and are enjoying their new 3x larger home. The move seems to be causing them to bond quite a bit as they are inseparable now. Maybe a spawn coming!? 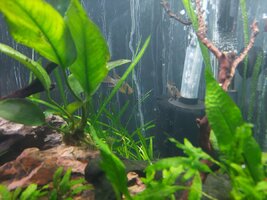 Growing Out The Juvenile Discus