Crafty Cichlid
I have about 15-20 Snow White cichlids that are about a month and a half out of their mother's mouth (the interesting things we say here). I'm in Orange County, CA, City of Orange.

They are schooling around in a 15 gallon and are about 1 inch. So far everyone is getting along, but that probably won't last. There are two smaller broods growing up behind them, snow whites, and some (probably) kenyi.

Took all the parents to the LFS because as cool as it is to breed them, they became as prolific as guppies, and I don't wanna play keep up!

Prefer to sell/trade locally but willing to give shipping a try (I get the concept of how to go about it, but don't want to have the babes meet some tragic end!)

I really don't know how much to sell them for, make a reasonable offer. 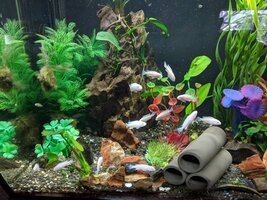 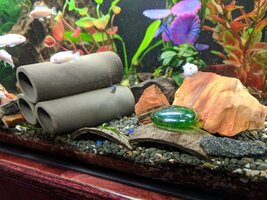 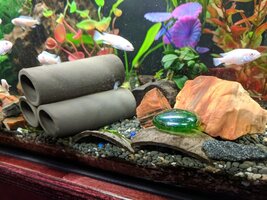 Wraithen
Well they are pretty. Sorry, I just came to see what they look like.
Crafty Cichlid

Well they are pretty. Sorry, I just came to see what they look like.
Click to expand...

I'd keep a few if I could, but I just converted my 30 gallon (where they were bred) to a planted betta sorority/kuhlI cluster!
KimberlyG
We can't find them here Too bad you are so far away.
Crafty Cichlid

We can't find them here Too bad you are so far away.
Click to expand...

If you want to try shipping some, I trust your instinct! They're pretty common in SoCal, but then, lots of things are.
KimberlyG

If you want to try shipping some, I trust your instinct! They're pretty common in SoCal, but then, lots of things are.
Click to expand...

I'm not comfortable shipping in the weather we are having in Northern Illinois. We still have freezing temps every night. That's why I'm not selling my shell dwellers right now. I wait until May and June.
Crafty Cichlid
Too bad I'm not in MissourI anymore! I remembered from another of your posts that it's pretty chilly in your neck of the woods.

I'm unsure of rate of growth, but would you like me to set a few aside for warmer weather? Probably from the younger brood? If they outgrow the tank before then, I'll have to send to market of course, but it would be a good exercise in patience for me, haha!
Crafty Cichlid
KimberlyG I have four that are a good size for shipping, if you're still interested.