Was thinking about adding a snail or 2 to my new 10 gallon Shrimp Tank. Tank has hard water, with a PH of 8.0.

Tank currently has 5 Golden Back Yellow Shrimp (Neocardinia), which I am hoping to grow into a little colony.

I've been reading a lot on the benefits of having a snail or two in the tank to help keep the tank clean.

The only issue is, I dont like the looks of snails. I'm sure I'm not the only one who feels this way.

In my 20 long, I have a pair of Striped Borneo Loaches and 3 Oto's to help keep the glass clean, along with 3 adult Amano Shrimps to help with the stuff on the substrate. They do a decent job, but I dont think a crew like this would do well in my 10 gallon Shrimp tank.

So I guess my question is, can I get the type of benefits / clean up of a snail, but not have a snail? Or should I just suck it up and shop for a snail that I like and hope I find one?

If I do go with a snail, is there any types I should be looking for? I dont want any type of pest snail that will reproduce. If I recall correctly, isn't it the Mystery Snail that can't reproduce in freshwater? Or is that something else I'm thinking of?

Nerite snails are unable to reproduce in freshwater.

But as the tank is new and so algae will come and go for a while I would rethink the necessity of algae eaters in general. When you add a snail now and there are no algae or biofilms for weeks, the animal is going to starve. If you do everything right and the tank doesn't even develop substantial amounts of aufwuchs, the animal will starve, too. Then you have to feed it, which raises bioload which may cause anything in the first place.

You already have shrimp in the tank, that will need to feed on something, too. And you want to breed them or a least form a colony. Why adding food competition to that tank then?

All you have to do yourself is cleaning at least the front glass.

I was just going to post the same sort of answer ,there's no need for snails

How ironic.
I was going to go to the fish shop today looking for shrimp, because I don't want to add snails

IMO, nails seam to do the best job at cleaning of algae filled walls and biofilm on wood and coconut hides of everything I've seen and had. Nerites might do a little bit better of a job then mystery snails, but its hard to tell.

Mystery snails are the ones that reproduce in freshwater. They will lay there egg sacks on the lid or top rim of the tank, of missed and nor removed you can have a 100 baby snails or so. Nerite snails on the other hand only reproduce in brackish water. They get a little bit smaller the mystery snails (who can get a tiny bit bigger then a pingpong ball). The only bother with them as they will lay little unhatchable eggs all over the walls. In is annoying to some.

You are going to need to feed them. The will, eventually, run out of food in the tank. Feeding them will cause a heavier bioload in the tank.

I personally think you would be better off without them. You don't even like the way they look lol! Give your tank some time, there are other ways to treat algae besides a snail. It is a new tank so it might even go away on its own if you keep the perimeters maintained.

Thanks so much guys! Maybe I'm just being a little paranoid about this tank. First time I've had dwarf shrimp before and want to make sure the tank and the little boogers do well.

I did loose one shrimp about 3 days after they were added, but I am now on day 6 and the remaining 5 seem to be doing great. I did add cycled media into the tank, and I let the tank run without animals for a couple weeks to get a little biofilm to grow prior to adding them.

I did check all parameters after the one died, but everything looked okay (no ammonia, nitrites, very little nitrates, good KH / GH and 8.0 PH). I'm guessing it may have just been something with that one shrimp.

You say your gh/kh are good what are the figures as gh is a killer
Click to expand...

I prefer to see it at gh8 may be going to gh10, some say they've kept them in gh19 (liquid rock)
If you have any problems later on bare this in mind

Are you planting? Smaller snails are better at cleaning plants than big ones that can't climb stems.

Was thinking maybe Malaysian trumpet snails might be an option? But they do reproduce in water, and can do this well
They stay buried in the substrate until it’s dark or I turn off the oxygen, so if you don’t like the look of snails, they will be out of sight mostly. They give birth to live young, and can populate quickly. But, they also do a great job at turning the substrate for you, loosening it, clearing up decaying matter under the substrate, etc.
“They have parties on the glass at night” is how someone described them to me.

Nerites are cool snails, good for algae. I’ve had some olive nerites for over 3 years (I didn’t think they got that old, perhaps it’s because the tank is outdoors and it’s got endless food supply for them). But, the issue with nerites is the sesame-seed-eggs they will lay EVERYWHERE… glass, driftwood, rocks, plants, ****… even other snails, why not?

I put a group of wild guppies in a 7.5gal, introduced some algae-covered-plants, and they are pristine now. The males usually only grow to 1”, so a small bachelor group would do alright indefinitely in a 10gal. I have RCS in with my black Moscow guppies (and even some peppered corydoras…) and their numbers are still growing. The peppered corydoras are large/healthy enough to be introduced to the 180gal, so once that happens, the RCS numbers will probably explode. The adult shrimp aren’t bothered by the corydoras and are out and about frequently. I attribute the RCS multiplying to the dense Java moss and subwassertang and mystery- plant root system (I think it’s a ludwigia) 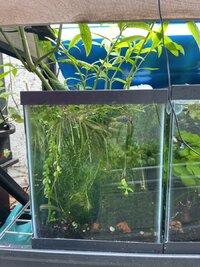 I’ve added shrimp culls to the 7.5gal with the wild guppies, so I’ll find out their compatibility and reproduction success.
You must log in or register to reply here.

Sep 20, 2021
Ellebrius
C
Looking for some good snails to add to both tanks

Whats going on with my male mystrey snail?