So on Wednesday I woke up to my platy pine coning. After a google search assumed it’s probably dropsy. I have a 75 gallon tank and a 10 gallon hospital tank that’s full off mollie babies right now. I went out and got a 5 gallon for him that’s obviously not cycled but it is what it is… I’ve changed the water every day to avoid ammonia spikes and add in 1/8 epsom salt and kanaPlex 1full spoonful the first day then a half the next when I changed a good portion of the water. Below is a pic of my guy 2 days later after treatment and he looks the same. He is eating a little and still has his color. Has anyone had any success saving their fish from dropsy? Also it says online to put 1tbs a gallon on some sites and 1/8 on others… if anyone has any help with that it would be awesome too. It’s hard to do research on this when everything has different info. He is the first fish I got a year ago when I got into the hobby so trying to save him if at all possible.

This is from tonight 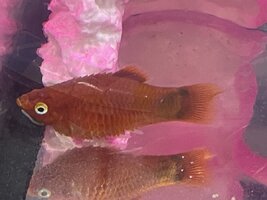 This one is from Wednesday morning 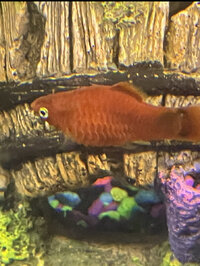 Definitely dropsy, it is possible to save a fish bit it is usually a high % fatal disease. Can't think of much more you can do at the moment, seems you"re doing what you can.
You must log in or register to reply here.

Platy with Dropsy, can a quarantine tank for treatment be 1 gal?

Contemplating Canister Filter, Best To Get?