The two trios arrived 9/30 and 10/1 and were both in great health. However, a few days ago (10/14?) I noticed that the largest female had a white mark on her. I thought she may have scrapped herself on a rock or some of the wood so I just did a WC and kept an eye on her. She was acting normal. It was still there a couple days later & one of the males had appeared to develop fin rot & began swimming in a somewhat vertical manner so I began treating with paraguard 10/17 and have dosed each day since that following the instructions. Unfortunately, they are all displaying signs of stress now (all huddled today but the sick girl is giving birth so I'm wondering if she's stressing everyone else out). The two ones have also been flashing against plants a little bit. 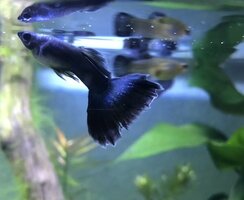 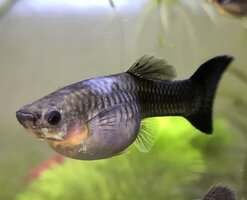 Any idea of what is the matter? Should I keep up with the Paraguard? I'm tempted to stop or reduce treatment because of the stress. Would it be best to give these two a dip? This is the quarantine tank so I cannot isolate those two further unfortunately.

The bloating could be from over feeding or internal parasite I don't really know. Hopefully some one has a better idea then me
Upvote 0

The bloating could be from over feeding or internal parasite I don't really know. Hopefully some one has a better idea then me
Click to expand...

Oh, she isn’t bloated. She was pregnant, she popped this evening so she’s skinnier now. Thanks though.
Upvote 0