So on Superbowl sunday I found my golden dojo loach 3yrs old (Midas) on the floor (wasn't there for more than 2-3 hours). At the time he had turned a darker brown but when I proceeded to attempt to pick him up and dispose of him (then planning to sob for the next few hours) he began wiggling and I returned him to the tank as fast as possible. At first he floated vertically for 20 minutes returning to his normal color and shedding off his slime coat. My biggest fear was spinal damage or organ failures due to the trauma of jumping out of the tank. Over the next few days he seemed to only improve except he refuses to swim along the top of the surface as he usually does and he has developed some upraised skin and a whiter underbelly. I assume it is a bacteria or a fungus but he is breathing rapidly and I want to make sure I get the right meds for him. I know that loaches usually require half doses etc, nitrates in the tank are minimal and practically non existent and ammonia is the same . (I don't keep track of numbers) I cycle the tank once a month with 25% water change, water has aquarium salt for electrolytes etc. Midas's also seems to be losing weight but I can't tell if it is 100% that or the contrast between the upraised skin. So overall symptoms are upraised skin, lightening of the underbelly, and rapid breathing with the mouth open. I would really appreciate it if I could get some insight because this is my first experience with fish sickness in my 4 years of fish keeping. 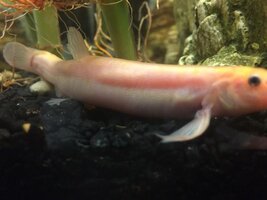 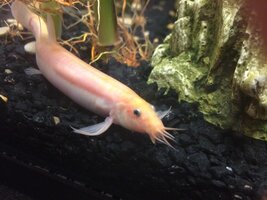 Welcome to Fishlore JRW. I stumbled onto your thread today but I see you posted several days ago already. I'm really sorry we failed to respond to you earlier! How is your loach? It's horrible to find a fish on the floor like that. I hope he is feeling better. If not, let me know and I'll see if I can help some how. I'll be alerted now if you post in this thread again.

How did things turn out? I don't have any experience with this so I can't offer any real help

How did things turn out? I don't have any experience with this so I can't offer any real help
Click to expand...

This thread is from February of last year, it confused me when I looked at it first too. I doubt the OP will reply.

Crab intruders? In my house?