One of our ADFs has been ill, I hope I have gotten this template right. Thank you in advance.

What is the water volume of the tank?
10 gallon tank. We keep it about two thirds full so about 6 or 7 gallons of water.

How long has the tank been running?
About 7 months. Upgraded from smaller tank.

Does it have a filter?
Yes.

Does it have a heater?
Yes.

What is the water temperature?
Around 78 F

What is the entire stocking of this tank? (Please list all fish and inverts.)
Four african dwarf frogs

Maintenance
How often do you change the water?
Weekly

What do you use to treat your water?
Seachem Prime

Do you vacuum the substrate or just the water?
Bare bottom tank, but I will glide the vacuum over the bottom to catch any debris that may be building up.

What do you use to test the water?
API Test Kit

What are your parameters? We need to know the exact numbers, not just “fine” or “safe”.

Feeding
How often do you feed your fish?
Every other day

How much do you feed your fish?
With pellets I'll try to drop some in by each frog and clean up whatever gets left after about 10 - 15 minutes. With brine shrimp I try to make sure each frog gets 2 or 3 decent size pieces individually.

What brand of food do you feed your fish?
Brine shrimp from Hikari. Pellets from Zoo Med.

Do you feed frozen or freeze-dried foods?
Brine shrimp are kept frozen.

Illness & Symptoms
How long have you had this fish?
Four months

How long ago did you first notice these symptoms?
Four days

In a few words, can you explain the symptoms?
Avoiding other frogs, spinning swim, red mark by left eye, trouble swimming.

Have you started any treatment for the illness?
I have used some Maracyn 2 in the water.

Was your fish physically ill or injured upon purchase?
No, but another frog we got alongside it from the store died of what seemed to be bacterial infection during quarantine back in April.

How has its behavior and appearance changed, if at all?
She seems to have trouble swimming, specifically she will sometimes spin in place a few times before swimming off or swimming up for air. Red streak by her eye, have note noticed redness in other parts of the body so far. Hasn't taken any food.

I first noticed something was wrong during feeding on Wednesday night. Previously she had been eating fine and interacting with the other frogs, but now she was becoming startled whenever another frog came near. What was more concerning is that before she would swim away from them she would turn around quickly sometimes several times in a row as if she were spinning. Our other three frogs have been acting fine and don't display any signs of illness.

I decided to move her to a separate tank so she would at least not get stressed out by the other frogs. She would still exhibit the same behavior when swimming at times, although when she had to swim up for air she seemed capable of doing that.

When I got a chance to examine her face closely I noticed that she had a red streak by her left eye. This appears almost as a scratch, although there is nothing in her tank that I can think of that is sharp and capable of producing such a scratch and I have never seen the frogs cause such an injury to each other before.

I also considered that it may be a bacterial infection since another frog we got alongside her from the store became ill and died during quarantine. He had become very lethargic and upon examination he had reddening in some of his limbs and later on his face. So far this one hasn't had any visible reddening along her limbs or underside. The only redness is still the line by her eye, which a couple of days later still doesn't seem to have spread. However, I still come back to suspecting this is some bacterial infection given that it seems to be impacting motor skills with the swimming.

I had gotten Maracyn 2 when attempting to treat the other frog earlier this year and I've treated the water in her medical tank. I'm not totally sure if this is the right course of action. The first day I used it she didn't really seem to respond any differently. However, today after I added some of it to her tank she started swimming around quickly and eventually just floated on the top lazily shortly after that. I have seen other information out there from people advising to use it for ADFs suffering from bacterial infection. But if it's having a negative effect I don't want to torture the poor girl, especially as I'm still not 100% on what the problem is.

She also hasn't accepted any food since she's started exhibiting this illness. The first few days she was still fairly active. Since last night she has become less active, floating around the top or resting somewhere along the bottom. She also seemed to have trouble swimming up occasionally, where she would swim up a little bit but not go all the way and just swim back down. I also at two points with 30 minutes found her upside down and had to lightly squirt some water by her to get her to move and right herself. Then she was also at the surface but upside down, I went to try to pick her up with a glove but as soon as I touched her she swam away on her own.

I thought this was going to be the end, but then other times she would just swim up all the way or just float up to the top on her own and rest like that for a while. She also seems a lot more stable and in control of herself for now, haven't seen her flipped upside down like that since then. I'm not sure if the decrease in activity is associated with her illness getting worse or the fact that she's gone without eating for a while now. Again, I can't really see any changes physically that would show she has gotten worse.

I would like to add that when I have seen other frogs who became sick they would often frantically try to swim at the sides as if trying to get out of the water, even if water quality is checked and perfectly fine. I have not seen her do any of that whatsoever. It helps me maintain some hope for her, but I'm not sure what to do at this point. Sorry for the long post, but I wanted to be as descriptive as I could and put in all the details I could remember. Thanks very much for reading!

I'm going to post a picture and link to a video if the site lets me. The picture is to show the red mark by here eye. It's from Thursday I believe, and it still very much looks the same. It's difficult to get a good picture of it with how small these frogs are so please forgive the quality. The second is a video of the weird spin swim she has been doing. 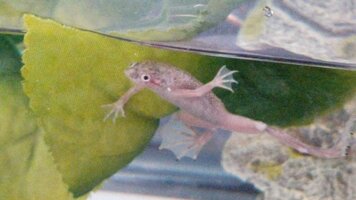 This is the videos.

Welcome! Really excellent detail, and it's obvious you're doing everything you can to help her. I would continue the Maracyn 2 treatment to completion and see how it goes -at this point it can't hurt. If the red streak on her face appeared suddenly and remained the same size, it's possible it was caused by her feet scratching it. The spinning is new to me, but looks somewhat similar to how they act when trying to shed their skin. Perhaps lacking traction due to the bare bottom she keeps spinning around, but that's just a guess. When I kept my frogs in a bare bottom QT tank they didn't move around like they did in sand or gravel. You're doing everything correctly but maybe someone else has some other ideas. Keep us posted.

Thank you for your message, Kjeldsen.

The spinning really has me stumped, I did quite a bit of searching online for information about sick frogs and didn't find anything about that specifically. It's interesting you say that about the shedding. Now that I'm watching it in that context it does look like she's going for something, in the video I recorded she is always going to the left never the right. I don't believe she's actually trying to shed, because they've all lived in a bare bottom tank and never had any trouble with it before... but now I'm really starting to think that she is trying to reach a part of her body on the left side.

Could she be trying to reach her own wound? Since it's on her face, obviously she'd never be able to reach it with her mouth and would just keep spinning... your post has really got me thinking now.

If this is a cut she sustained somehow, are there any other recommendations on how to treat it? I guess the Maracyn 2 would help deal with some bacteria that might cause an infection with her wound, but I would like to know if there is a better option for treating a physical injury.

Making an edit because I thought further on this, and funny enough I just read another thread on here about ADF aggression.
I'm starting to believe this injury could have been the result of a fight with one of our other ADFs. While the frogs usually aren't too aggressive, I have seen them fight with one another during feeding time. Usually it isn't too bad, the frog biting will let go after a couple of seconds, but other times it can get a bit intense. Just today while I was feeding them I had to actually lift two of them out of the water in the palm of my hand to get them to stop.
Another important thing to note, most people seem to say that the dwarf frogs don't really retain sharp claws, as the nail tends to grind down on rockier substrate. I guess because we have them on a smooth bare bottom tank our frogs seem to have retained their sharper back claws.