Good whatever time it is where you are!
I have some questions about red rilis. I just got twelve of them, and one is berried (yay!!!) for now, I’ve put her, and one other shrimp(so she won’t be lonely)in one of the mesh breeders. - along with three small moss balls and some Christmas moss. I’d like the babies to be quarantined when they’re born so I can keep an eye on them.
But I don’t want to do that if it’s going to hurt momma shrimp. However. My tank is moderately planted (I’ll insert pics) but there’s ALOT of air flow and I feel as that might hurt wee baby shrimp. As far as other fish, we’re looking at a surprising depressing amount for a 75 gallon tank. Literally nothing gets along with shrimp but they’re the most important part of my tank (to me) so I’ll have to give up my other fish dreams. Anyway. I’m looking at five guppies, twelve red rilis, one glass catfish (two inches?) one freshwater clam and then, drumroll, an 11” pleco. So basically a whale shark. With that being said, nothing In there should really cause too much of a problem (I’ve been told) and there’s lots of places to hide, pots, plants, a giant moss tree, etc. but I’m still worried about letting them free until they’re older.


Next question- does mommy shrimp lay eggs or are they born live? From what I’ve seen she kicks them out and then they kind of immediately pop to life, I can’t see eyes yet, but I think that’s because of the net breeder box. And I have surprisingly poor eyesight for a 23 year old.

Side note- I do have lots of bio film and goodies, but I also ordered baby shrimp food powder stuff. Hopefully that will give them the best shot.

If she has say, 25 eggs, how many should I expect to live?


Is there anyway somebody more experienced can look at her and give me an estimate of how long until she has the babies?


Also I just looked at her and it looks like one of her eggs is kind of hanging out from her undercarriage. Is this her dropping her eggs???
I’m looking again, and maybe she’s just fanning? But it does look like one of them is hanging out a little bit.

I was, however, able to get the most useless pics of all time

I hope you can see them. 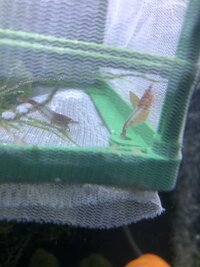 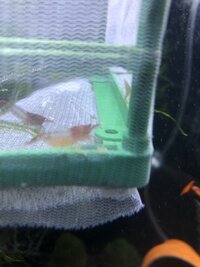 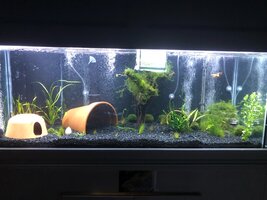 Update- She has stopped fanning/kicking.

The female will fan the eggs continuously and when they are ready to hatch she will delivery them from their eggs by kicking the swimmerets harder sometimes flicking the baby shrimp off.
However the pleco will eat shrimp it "accidentally" sucks up or swims over. The guppies will pick at smaller shrimp and the ghost cat (which is a schooling fish) will hunt the small shrimp.

The female will fan the eggs continuously and when they are ready to hatch she will delivery them from their eggs by kicking the swimmerets harder sometimes flicking the baby shrimp off.
However the pleco will eat shrimp it "accidentally" sucks up or swims over. The guppies will pick at smaller shrimp and the ghost cat (which is a schooling fish) will hunt the small shrimp.
Click to expand...

So keeping them in the breeder is a good idea then, yes?

Yes, the babies will be safe in it, provide food for the adults while they are in there, either with new plants or small amounts of food for them.

I’ve been dropping 2-3 flakes of food in there for the adults.

Female betta full of eggs - not set up for breeding