I have a small school of golden WCMM in my 20g. I just noticed one of them has a shredded tail fin. It is shredded to the point that there isn't any color left it in. It was fine as best I could tell yesterday. I spend lots of time observing my tank. THe poor thing is floating at the top and gulping air today. I took a pic before I started the pwc and after I resize it, I'll come back to post it.

It is in a 20 gallon with 4 mollies (and molly fry) and cories, nerites and plants. I just tested my water and I'm having a nitrate spike (other params are fine). I'm changing out 50% right now to correct that. I'm running two hob, both aqueon, I think the 10 and 20? I'm also running a bubble wall to help oxygenate the water. Yes, the tank is very populated, but I am moving in a few months and won't be able to upgrade to a larger tank until then. And other than the fry, I'm not adding any to replace until after the move/upgrade.

Here are the gritty details...around the time that one of my my molly began to have fry (7ish days ago), another female developed ich. I decided to raise the tank temp to cure that. My water is hovering around 85.6F. No one appears stressed by this. The ich did spread to the other mollies, but I'm letting it run it's course with the temps. I also haven't done the gravel vac because i'm afraid I'd suck up fry. If they ended up in my water change bucket, they'd be very hard to recover because it's dark in color. When not in use, it sits outside where the temps fall into the 50's...I've treated ich before, but never with fry in the tank.

Only the adult molly have any white spots. The 5 cories and the 5 WCMM are still not showing any symptoms. Everyone is eating well. I don't think it would be safe to medicate the tank given that I've already gotten the temp so high. I don't have a QT (or the space), so that isn't an option. I kinda feel that if I pulled the poor WCMM with the tail issue out that it would die from the shock anyway. I know that the temps have to be stressing the cory and WCMM even if they appear to be fine. Gaaahhhh! This is so frustrating!

Is there anything that anyone can recommend for the circumstances? I feel that I'm kinda limited by the temp and the fry. I'm using purigen in one of my hob. I'm thinking to pull that out to use my Stress Coat + rather than Prime to help the torn fin. I don't have to worry about chloramines...but there is the nitrate spike. I have sponge in both hob plus prefilter sponges on the water intake. So I'm hoping that if I pull the Purigen out that I wouldn't cause a minicycle. But should I use Prime for the nitrates or Stress Coat + (with aloe) for the torn fin? In my experience, the SC+ is superior for injured fins.

So I understand that the situation isn't ideal. It's complicated and messy. I'm not sure if there is any course of action other than to stay the course with the temps for ich. So if you've been through something similar or have other supportive suggestions, I'd love to hear them.

Here is the photo....its a camera phone version...but maybe you can see that it's tail is shredded. Now the poor thing is hiding at the bottom of the tank in some plants. That usually signals the end...but I guess we'll see. :/ 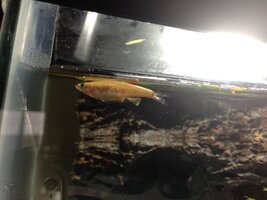 And when I just tested my water again I still show 40ish nitrates. It's only a few hours since 50% pwc and no feeding! I think I'm going to just use a heavy dose of Prime to detox tonight. The WCMM is still hanging in there.

Talking to myself obviously here....
Last night I gave an overdose of Prime to lock up the nitrates. The minnow died. I can't test my water just yet, isn't it Nitrates that Prime would screw up the reading of? Grr....I really dislike Prime sometimes. I'm going to be busy tonight and away from home. I'm tempted to just change out 50% again despite the Prime. I can't imagine that the 40ppm is gone. I also have a package of Nitra-zorb that I bought awhile back. I'm considering throwing that into the back of the smaller hob. But when I used it during a spike in my shrimp tank I wasn't impressed with the results...so IDK if I will or not. I'm guessing it can't hurt?

Might want to try a bigger water change. For emergencies, I take out 80% of the water, fill it up to 40%, drop it back to 20%, then fill it all the way up. You effectively remove 90% of your nitrates this way. I have never tried prime, but most of the other stabilizing chemicals I've used take awhile because they are just building up nitrate fighting bacteria. As far as the ich goes, I've never dealt with ich before, but I've heard quarantine tanks and copper based medicine works best.

Good luck, I just started with WCMM's about a month ago and I have been losing them like crazy. Can't seem to figure it out.

I love my White Clouds.
Not exactly the same situation, but when I first started keeping fish a few months back, I started with 6 Zebra Danios in a 5 gallon. (I know, too small a tank). Anyway d/t my inexperience I lost 5 and ended up with one lonely zebra danio.
I was about to upgrade to a 10 gallon and was thinking of what I wanted to stock it with. I decided I wanted White Clouds since they seemed to be a peaceful fish and I thought my Zebra Danio would do well with them.
I think I was wrong, a couple of days later my poor Zebra Danio's tail fin was gone and he was swimming around as best as he could with his little nub. I knew he was doomed but kept rooting for him.
Anyway, I can't prove it, and I never saw it, but I have a sneaky suspicion my White Clouds went cannabal on my poor Zebra Danio's tail.
Is it possible he was attacked by fellow tankmates?

B
Ich-X to treat Fin rot too?