Question Should I Take My Fish To My Dorm?

Hey guys, I made an account specifically so I could ask this question. I'm very concerned about my betta, Maxwell. He's in a heated 10 gallon planted tank and lives with a nerite snail named Acorn.

I'm a college student and I live in another state, not too far though, just about two hours outside of my home state. He is currently under the care of my older brother, I gave him a written manual on how to take care of Maxwell. (Change 30% of the water weekly, don't forget to add water conditioner, feed him 3 pellets daily, fast him one day a week etc.) I've had him for almost a year now, and I noticed every time I leave, he begins to bite his tail. When I talk to my mother on the phone she says "Why does he keep shrinking?" I come back maybe every other week as long as I don't have much school work and every time I do come back his tail is raggedy.

When I came back from school for winter break, I had seven weeks off. Because of this tail problem, I decided to feed him the frozen food I have in the freezer (brother is too squeamish to feed dead insects) and do larger water changes. His tail mostly grew back, but then when I had to go back to school, he went back to tail biting.

It's nearing the end of the school year, so I can't take him back to the dorm with me because I figured that would be pointless. However, I am debating on whether or not I should take him with me next school year. I don't know how strictly my brother adheres to the weekly water change schedule. He's my pet, so I feel bad about putting this burden on my brother who isn't really into fish. He'd rather have a dog or cat, but since I'm allergic, we can't have them. I read online sometimes bettas bite their tails because of poor water quality or lack of mental stimulation and I wonder if that's why he bites his tail. My family sees fish as nothing more than decorations, so I highly doubt they're paying much attention to him anyway. Since the 10 gallon is going to be hard to transport, I figured maybe I could get a 5 gallon so it'll be easier to take home during breaks or moving in and out. I'm worried about downgrading him and constantly moving him from place to place. Is this doable? Any advice would be appreciated, thank you.

I think it is nice of your brother to do that for you. Even if he isn't doing the best job.

My opinion...what fun is a pet that you only get to see a couple times over a 9 month period? I think a 5 gallon is perfectly fine for a betta and probably easier to fit into a dorm. Heck, he might even do better in a 2.5 gallon with you, rather than a 10 gallon with your family who doesn't care too much about him. I know 2.5 is pretty small, but...dorms are small!

Basically, I say bring him with!! Use either a 5 gallon or a 2.5g whatever you think will work in the space you have at the dorm. If 5 gallon works with the space you have, that clearly ideal. But if you have to go even smaller, like 2-3 gallons, I still think the fish would be better off in a smaller tank with better care rather than a larger tank with minimal care. You know??

Welcome to Fishlore. Moving him from place to place constantly I think can just be too stressful for the fish. Have you tested your water? that's a way to find out if the tail biting is just fin rot (and not tail biting) because of bad water quality. If your water is good, then I would say he might just be bored honestly and he is in fact biting his tail. Changing things around in the tank can help, getting him maybe another plant, a new cave etc.. to keep him entertain, switching the set up around

That has to be the best, most apropos name for a snail I have ever heard

I would definitely take him with you. It's not like we are talking bout a 55 gallon aquarium. You won't need a python for water changes. Just make sure all roommates understand "hands off".

Guanchy said:
Moving him from place to place constantly I think can just be too stressful for the fish.
Click to expand...

Other than spring break and Christmas break...how much bouncing from place to place are you thinking is going to happen? I don't think we are talking about "constantly" moving around. We are talking about just a couple moves over a 9 month period. I would assume anyway.....and I don't see that being overly stressful if done correctly.

bizaliz3 said:
Other than spring break and Christmas break...how much bouncing from place to place are you thinking is going to happen? I don't think we are talking about "constantly" moving around. We are talking about just a couple moves over a 9 month period. I would assume anyway.....and I don't see that being overly stressful if done correctly.
Click to expand...

whoaa easy easy, lol. just my opinion, I think it can be stressful. Since she mentioned breaks I figured she meant it as moving the fish around from home to school every break she gets.

Guanchy said:
whoaa easy easy, lol. just my opinion, I think it can be stressful. Since she mentioned breaks I figured she meant it as moving the fish around from home to school every break she gets.
Click to expand...

What about my post made you think you needed to say that? Did you somehow interpret my post as me jumping on you and calling your opinion stupid? I was simply pointing out that typically...the only long breaks during the school year are one winter break and one spring break. If the OP was just going home for a weekend, the fish would be fine for a couple days staying at the dorm. So I wasn't imagining much bouncing back and forth for the fish. That's all. Not sure how that garnered a WHOA TAKE IT EASY!!!

I agree with everyone else that you should take the betta with you next year. You can take the 10 gallon, they aren't heavy at all when emptied to maybe an inch or less of water. Then you could just bag your fish in the type of fish bags that stores put them in, then wrap in a blanket or towel or something for insulation, unless it's hot outside. Then you could put your filter media in a ziplock of tank water to keep the bacteria alive and then just put the filter and fish back in after acclimating. Boom, done, easy peasy

It is doable, I would get a cup to put him in for transport though. I use one of those ones with a straw that is removable and put it in a cup holder. I move a 10 gallon tank to and from college and put the water in a five gallon bucket to bring it home. Be sure to drain it completely (substrate can still be wet) or else the water will slosh around and knock over decor or mess up your scape. The plants get covered with damp paper towels to hold them in place and keep moisture in. You can leave decor in, just pad around and under it with paper towels, especially in places where they hit the glass. I practically half fill my tank with paper towels and have no shifting issues on a three hour long drive that includes winding pot-holed roads.

For breaks a little over a week or less, I just do a water change the day before leaving and let everything be. Sometimes I use a fishmate automatic feeder with an airline tube running to in to keep the food from sticking.

I would make sure that you check with your school rules to see their tank size limits first though.
OP

Wow thanks for the replies guys! Anyway, I’ve been thinking about it for a while, and I think it’d be best for me to be setting up a 5 gallon over the summer. My mother won’t let me take the 10 gallon, as she’s too fond of it. Thankfully she said she’d pay for a smaller tank. Just to clarify, I was planning on only taking Maxwell home during winter break and summer break. Because there are a lot of international students at the university and spring break is usually shorter anyway, they won’t be cutting off the electricity so I could leave him there for a week just fine. And yes I’ll be sure to tell my roommates to leave him alone, don’t tap on the glass, feed him, etc. when I go home on the weekends. I’ve got 3 sponge filters on Maxwell’s current tank so I could easily jumpstart a cycle by taking one of them out and putting them in the new tank. I’m also going home this weekend and I could test the water then. If it’s got high nitrates I could tell my brother to do larger water changes. I’m so attached to this little guy I do miss him a lot, so
OP

Oh by the way, I have added a new piece of driftwood to his tank and rearranged it a few times but nothing works, so it has to be water quality or the fact that my family doesn’t pay attention to him, we’ll see when I go home tomorrow

ElTacoEater said:
Oh by the way, I have added a new piece of driftwood to his tank and rearranged it a few times but nothing works, so it has to be water quality or the fact that my family doesn’t pay attention to him, we’ll see when I go home tomorrow
Click to expand... 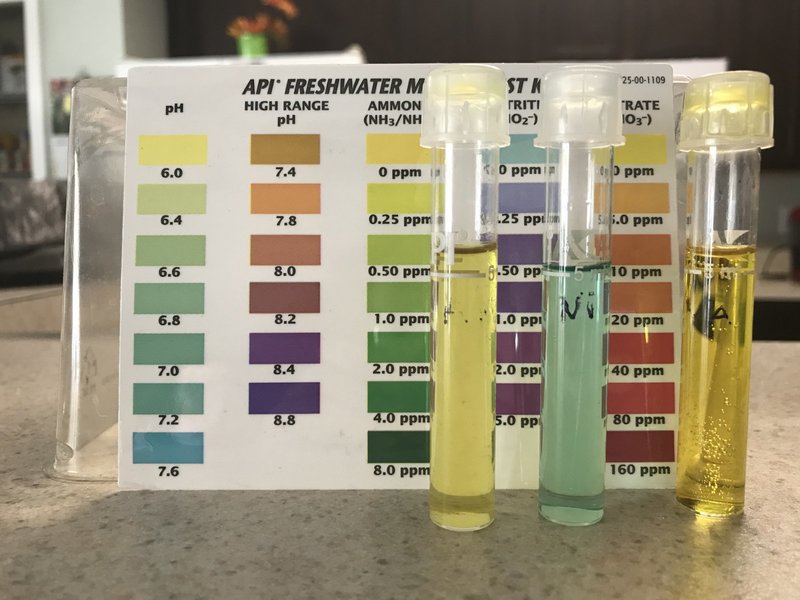 Well, here are the results of the water tests. I don’t think anything seems out of whack, so Maxwell probably is bored and biting his tail out of lack of mental stimulation.

What do you guys think?

SOOOOO....this is how I started with fish. I got a Betta in college cause I was at a pet store and he was pretty. No idea what I was doing. Anyway, my poor Betta moved to a few new dorm rooms with me, went home during the summer...(I was a way more naive fish keeper at this point than you are). I think you'll be OK if you take him back with you to school. You'll be happier. Your brother will be happier, and your fish will get more love and attention. Plus the noise of the tank will be good white noise for studying. Good luck!
Share:
Facebook Twitter Reddit Pinterest WhatsApp Email Link