Should I Get A Few More Minnows Just In Case

Gulsetlm
Member
2 Nights ago I bought four “Crappie Minnows" They were Kalvin, Kyle, Chad Hienz, and Chad Burger. Kalvin and Kyle Died the first night when I moved then, and both Chads I thought weren’t going to make it through the night.
I woke up at 3 that morning to find them racing around the jar they were in ( It Is a huge pickle jar).
When I went to bed yesterday they were fine. When I woke up Chad Burger was dead.
I need to clean the jar but last time I did that Kalvin & Kyle died (Toilet Funeral).
Does anyone know how I can move Chad Hienz without killing him?

If Your Wondering Where I Got Them From I Got Them From Ace Hardware.
I Feed Them Tropical Fish Food.
If You Are Wondering Why I Have Them, I Need Them For A Science Experiment At School(It Is A CO2 Experiment Where I Put A Very Very Very Small Amount Of Bromytheal Blue In The Bowl And Leave It At School Overnight To See If MY Hypothesis Is Right)
Wondering Why I Bought 4 Minnows From A Bait Shop? Well, I Thought I Could At Least Save A Few, Plus Minnows I Know Don't Live Too And Can Survive In A Variety OF Different Conditions

Does Anyone Have Answers On How To Move My Fish Without Killing It?
SM1199
Member
Sorry to say but you're not going to be able to keep those fish in those conditions without killing them sooner or later. Fish produce ammonia, which is toxic, and they basically kill themselves with their own waste. This is why they need a filter (and not just any filter, but a cycled filter - please read up on the nitrogen cycle) to survive in the small (relative to the wild) glass boxes we keep them in, because that removes the ammonia faster than they can produce it, and keeps them from nuking themselves.

Also keep in mind that chlorine will kill fish almost immediately, so if you don't add a dechlorinator to your water, it is likely there is chlorine in your tap water and that may be contributing to deaths when you change water or move the fish. Similarly, large differences in the water temperature of new water can shock kill them as well, not to mention sudden changes in pH and other conditions can do the same. In order to change them over to cleaner water, the water should be dechlorinated, temperature-matched, and added slowly to prevent shock.

I have a feeling you probably don't have the time or resources for just this one project, but the correct way to go about doing this (especially without skewing your research results) is to cycle a larger tank, not a pickle jar (which can take over a month to establish). Your experiment will be more accurate because then you'll be at least somewhat certain, if their behavior or health changes during the experiment, that it's not because of poor water quality.

You might be able to continue the experiment without a cycled tank, but 1) you'll need to start over with new fish because the ones you have were already exposed to too many stressors, and 2) you'll need to get a larger container and change most of the water at least once, ideally twice a day, and 3) you won't be as certain that your experiment is producing the effects rather than their poor water quality. Depending on how formal this research is, you can simply talk about that in your conclusion, that water quality may have impacted your results.
Gulsetlm
Member
Thank You For Your Help, I Will Be Able To Pass This Stuff Down To My Sisters If They Want To Do This Experiment At School When They Get Older. Also My Water Comes From A Well So There Is No Chlorine But There May Very Well Be Small Amounts Of Iron In The Water If That Affects Them.
This Would Be Around The Size Of The Jar: 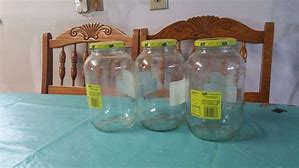 SM1199
Member
Those jars are not big enough to house minnows for more than a few hours, maybe a few days or a couple weeks if you change most of the water at least once or twice a day, but do know it does not do any good for the fish, their health, or their wellbeing to be kept in those jars.
Gulsetlm
Member
Chad Hienz Just Died A Few Minutes Ago(Third Toilet Funeral), I Think I Am Gonna Wait A While To Get Fish, And When I Do I Might Get Something Like The Celestial Eyed Goldfish.
SM1199
Member
Please do plenty of research before investing in fish. Goldfish especially produce a lot of waste compared to other fish, and will need a very large, established tank to thrive.
Similar Aquarium Threads