Short video of my cat, for anyone who's interested :)

This is a video we took of my cat awhile ago. For those who remember my first avatar when I joined, this is what he was doing when the picture was taken (with a really good camera, so it wasn't blurry). It's my profile picture for those who haven't seen it.

Anyway I was messing with my YouTube account trying to get this darn video of my rainbows to work, and saw this, so I thought I'd throw it up here in my forum because I can ;D

Hahahahahahaha that's adorable!
Is that how she begs for things? I'd be up a creek cause I wouldn't b able to say no. Ever. Lol

Thanks guys He's a Norwegian Forest Cat (related to Maine Coons); his name is Kepler and we adopted him a little over a year ago. Yes that is how he begs for things, like when he wants pets and you're not paying attention, or he wants to drink out of the bucket that is filled with old tank water, but has a box on top (he did that yesterday...silly kitty).

He's the friendliest kitty ever; I was used to my parents' cats, who run away from everyone. He wants pets from everyone, even people he's never met. He follows me and my boyfriend around everywhere, if we switch rooms he comes following, meowing as if to say "where are you guys going without me?" haha. He sleeps on my head at night, but during the winter he crawls under the covers and sleeps between my boyfriend and I because he thinks he's a people.

We also never call him by his real name, mostly because at the beginning we weren't sure what it would be. We started calling him "chubby kitty" (because he was a little chubby then haha) and that slowly morphed into numerous nicknames, such as "Chubs," "Chubbles," "Chubblekins," "Chubblemuffin," and so on. Sounds ridiculous, but he answers to it haha.


Edit: Here are a few pictures, for fun.

That's adorable. He sounds a little like my dog, but Mondo can't beg with anything other than his puppy face yet.
OP

He does act just like a dog...begging for food, drinking out of the sink (at least it isn't the toilet!). I think I forgot to mention that..he's too good for water off he floor, he just splashes in his bowl. Instead he drinks directly out of the bathroom sink.

Me and my wife love cats!!!

He is adorable! That pic of him with the remote is hilarious.

Caption should read:
"Please, please, PLEASE, oh pretty pleeeeeeese can I have another kitty treat? ...And a belly rub too? I promise I won't scratch on the sofa anymore!" :;a

Don't forget the "pleas pleas pleas can I have a treat? I promise I won't scale the curtains! I'll be good purr purr purr you know you can't resist me human. Please please please?"

Very cute pic with the remote.

Hahaha fortunately he isn't really interested in the fish. Sometimes my betta will catch his attention but he never goes after anyone. He is, however, very fond of the canned variety... ;D

Just saw the other pics. Norwegians r biggggggggg kitties and chubblemuffin (that's freakn hysterical) is no exception! That's a lot O kitty layn on that sofa!!!

I have a cat that also apparently missed the memo that he is feline. Drinks out of toluet bowl, greets u at the door, comes to the sound of a cheese wrapper, wants everyone to pet him, and even plays fetch.

Then again when u have as many cats as I do u r bound to have 1 of each available personality. Lol!!!
OP

How many cats do you have? I want to meet your kitty, he sounds cute

He is a gorgeous cat. Love the pics. And the name. We only have 3 cats right now, but the personalities couldn't be any more different.

Here's our 7 year old rescue cat, Dude. He's named for his personality. He loves to sit on the computer desk while I'm on it.

(Here he sat on the keyboard which happened to load your thread, ha!) 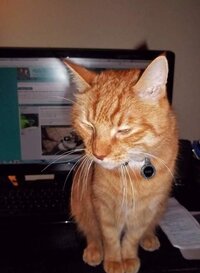 (And here, he is doing his "you're-not-paying-attention-to-me" pawing) 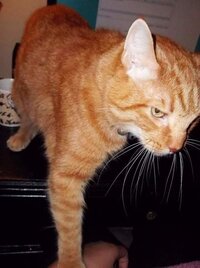 Hahaha he said he wanted to read the thread about kitties

Fishyluv he's a Norwegian Forest cat, the breed from which Maine Coons diverged. So they are closely related.

kb9plc that's a lot of cats!

Thanks for the comments everyone! I always tell people who say they don't like cats to come meet mine, and they'll change their minds haha.

I LOVE the NF cat, I always search for them on petfinder

Also Dude is the same way, he is so mellow. My in-laws live with us and my M-I-L "hates" cats (well until Dude came along!), but now she holds our cat and thinks he's great. I don't think you'd catch her doing litter box duty though!