Shell Dwellers... Who Helps Me To Choose?

Recently I discovered that Tanganyikan cichlids love high pHs.
The pH of tap water here is some 8-8.5.

Also recently, I read about the interesting behavior of shell dwelling cichlids and I would like to get a pair with hopes that they will start a colony.
Could anyone help me to make the choice? They seem to be very popular here and I can get them by mail.

This is how I would want them to be:

- Small.
I endorse the idea: "small fish in large tanks".
My tanks are a mere 13gal and 19gal, though. There is a 50gal outside the front door, but it has no heating and I like to "watch fish" at all hours of the day and of the night.
Generally speaking: the smaller, the better. However, supersmall is not the top priority here.

- Facultative shell-dwelling.
If I understand correctly, these need less substrate. I am no fan of sand, gravel, et cetera. Without means more water in the tank and is easier to keep clean. At present none of my tanks has any substrate.

- Aggressive enough to defend themselves from larger fish.
The 19gal houses 1 male and 2 females of Fundulopanchax sjoestedtI - dwarf red, the male is to be seen in the avatar picture.
There is also one harlequin in the tank. The BGs do not bother him at all.
But one sizeable Aphyosemion bitaeniatum was eaten by the largest female. I still do not understand how she did it. The fish was 2, 3 times the size of her mouth.
The Italian wholesalers/fish farmers whom I contacted told me not to worry. Also on the internet I read these tiny cichlids can defend themselves.

- Beautifully colored. My tanks have a black backdrop and white "cichlid sand" is on its way. There are red-brown lava rocks - in the 19gal: 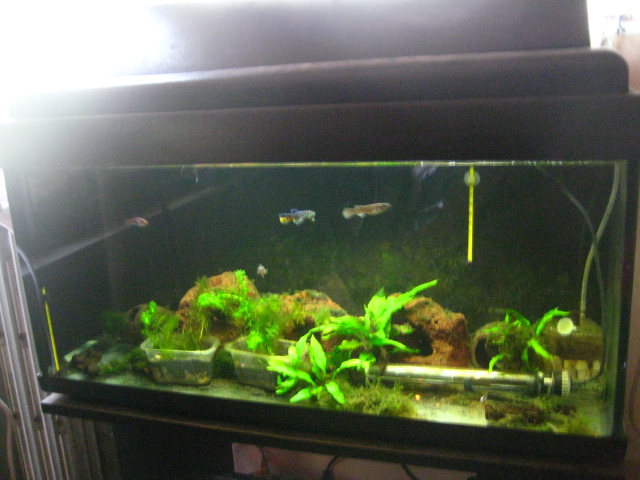 The 13gal is home to 1 pygmy Cory, 6 Cardinals, and the Blue Gularis male's twin brother, whom he turned into a kind of ragged banner. He is doing well now: 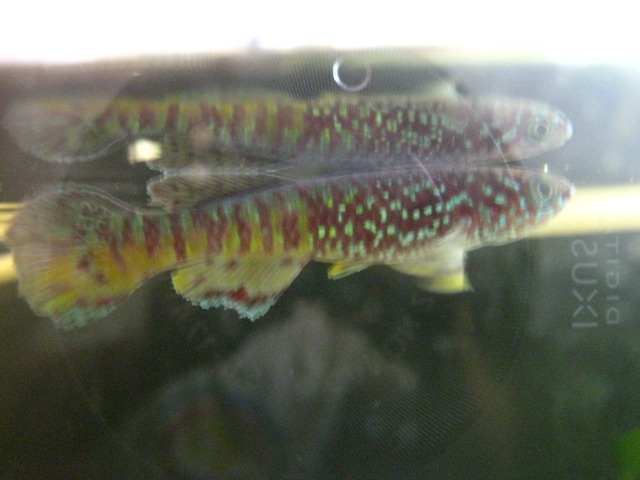 The inhabitants of the 13gal will move outdoors in a month or so - the warm season is pretty long.
When temperatures will drop I have a number of smaller tanks to accomodate them or they may get acquainted with the shellies.

- I read that similis is more beautifully colored than multifasciatus.
- I am a fan of all types of blue, from dark to (especially) light - that is what I like about my Blue Gularis males.

Many thanks in advance for any suggestion!

Giving this a bump up for you
OP

Sorry Coradee, I do not understand.

Could you say in simpler English what you are trying to tell me?

Hi, this is such a busy forum sometimes threads drop down the page & get missed, a bump brings it back up where hopefully it’ll be seen & get responses
OP

GREAT! Thank you very much!!

Some forums indicate the number of their members/subscribers. Considering how fast new threads appear on the billboard and the worldwide audience (the very first question I posted was anwered from USA, Indonesia and South-Africa) I guess at tens of thousands.
Share:
Facebook Twitter Reddit Pinterest WhatsApp Email Link