Member
I wasn't sure whether to post this in the Tank Build section or here, but I am redoing my Neolamprologus Multifasciatus. It's a 29 gallon that I started almost a year ago. I added four Multies about 2 months later in June. The tank originally had a Dwarf Gourami and Zebra Danios in it, but when no breeding was taking place, I moved those out a few months later. Since, I have been waiting for the breeding to commence and it never has. It seems that I have 4 males and I have been toiling over what to do. I made the decision to get more and will be going to the breeder to pick up 6 Multies tomorrow with the hopes that at least a couple, but hopefully more like 4-5 of them are females.

I will be preparing by emptying out all rocks, fake plants, and a most of the shells to clean off algae (can't believe that I have so much with 4 small fish who don't get overfed) and rescape so that when the new fish comes, it's a new scape for everyone. Hopefully, that will keep any aggression or bad tempers at bay.
So, the night before and pre-cleaning/rescape, here is the tank. Stay tuned for updates tomorrow.

P.S. - Don't mind the streaks on the glass, it's evaporated hard water that I haven't cleaned off the outside of the tank. 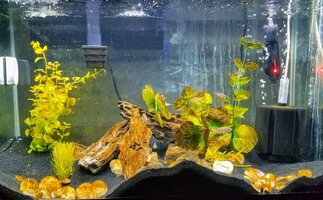 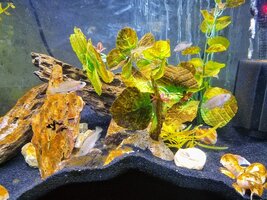 Member
Here's the tank after the work this morning. I moved rocks around and took some out, cleaned the fake plants of most of the algae, and cleaned off the algae from all of the shells. Oh, and I also did some cleaning of mulm from the HOB and squeezed out the sponge filter a bit.

I was a little worried, because I only saw 1 of the Multies in there. I left a clump of 4 shells that he was swimming around undisturbed and leveled and cleaned the rest of the tank. After adding everything back in and filling it with water, I left it in darkness for a while. Checked on it again about an hour later and all 4 of the fish were out and around each other looking great! 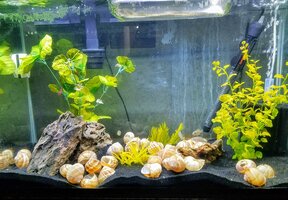 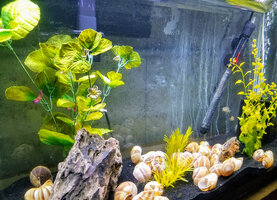 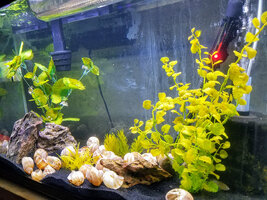 It was quite the eventful trip to get the fish. I got a flat tire on the interstate and had to change it and hand off the vehicle to my wife on a highway with a ton of traffic flying past us at 70-80 MPH!!

But, alas I got to the breeder, did the exchange and brought the fish home and got acclimating right away. He gave me 7 total. We had agreed on 6, but he gave me the tiny little one at the bottom left of the picture as a freebie. Still...6 Multies for $5 each is a steal! I've never seen them cheaper than $15 each! 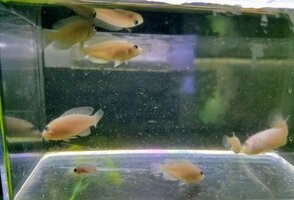 Eventually, got them into the tank. The breeder thought that he had given me 4 F, 2 M, and the tiny one unkown. As they are acclimating, I'm wondering if he may have given me more males than he thought based on their behavior. But, it seems that I have at least 2 bona fide Fs at least. They are hiding in and around the shells. 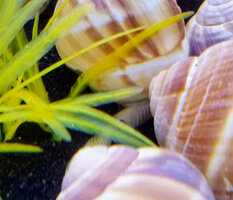 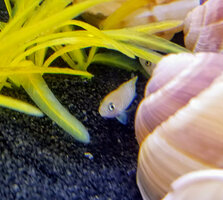 The rest are above the shells mingling with the OG 4. The great thing is that there is zero aggression between the originals and the new. There's a little bit of funny stuff between 3 of the OG 4, but that's probably just them trying to determine the pecking order now that there are others in the tank. 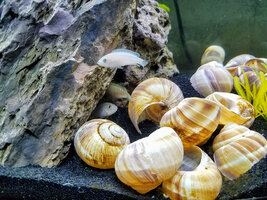 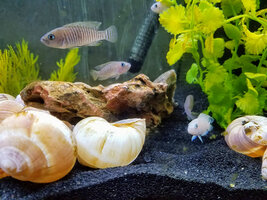 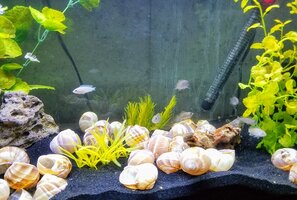