Hello again! Can someone identify if this is male or female lyretail creamsicle Molly? I have a make Dalmatian Molly in my tank also and know that the Dalmatian Molly is a male. He constantly is chasing my lyretail and rubbing his nose on the lyretail’s belly like an attempt to mate or something. Which makes me think that my lyretail may be a female but it’s so colorful and bright (and has what I believe is it’s gonopodium but that could just be how a lyretail’s fins look?) but it makes me think it’s a male? Also, I’ve heard from an uncredited source that lyretails are sterile? Is this true? Thanks so much for any and all responses! I’ve added a few pictures of my lyretail. 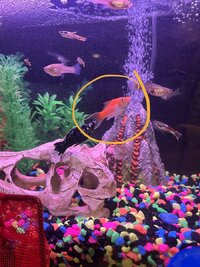 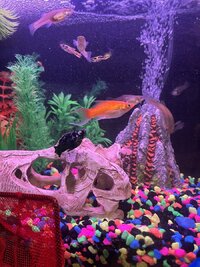 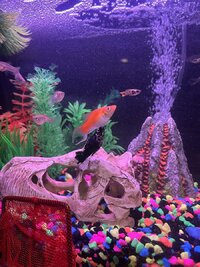 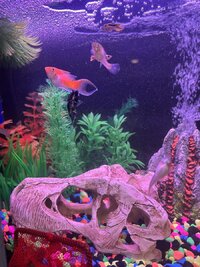 Looks like a male. And lyretails are certainly not sterile lol

Looks male and the length of lyre tails gonopodium make them useless on most cases .
They are not 'sterile ' but the line breeding has made the gonopodium so long and extravagant that it does not work at all in most case ..
Breeding lyres [of any livebearer] often requires a 'normal ' male with female lyres and a skewed fry result [ 50% normal 50% lyre ] .

There are two distinct forms of Lyretail Mollies. The older strain does not have the extended fins like Lyretail Swords, only the caudal fin is modified with shorter, more rounded extensions. The gonopodium is normal and perfectly functional. This is still frequently seen on some Sailfin lines.

The more recently developed strain is more like the Swordtails, with the dorsal (particularly on females) and ventral fins visibly extended. The OP's strain is one of the latter, as the ventrals are noticeably longer than normal Mollies. On Swords the gonopodium is greatly extended, stretching to the base of the caudal fin, at least. On the Mollies it does not appear to get so extended, so I am uncertain of the functionality on this strain of mollies. I have not read any literature lately, so I do not recall hearing anything about this.

The close placement of the Ventrals to the gonopodium/analfin does identify the fish as male.
You must log in or register to reply here.

Is my Lyretail Molly a female or male?

Whats the next fish you are getting?