Serpae Not Responding To Treatment.

These guys have been in quarantine a long time. I don't know what is up with them. They started coming down sick over 4 months ago. No matter what I try, this stuff keeps hanging on. Strangely, only the serpae tetras got it, and none of the other fish in the tank were affected.

These fish appear to have edema, one is pineconing & bloated. He also has a tail deformity. One is really bloated and one has a huge "scab" that will not heal. One other appears to be developing a spinal deformity. My first impulse is simply to blame weak genes.

BUT, I'm wondering if this is not a matter of high ph poisoning these fish. Our water is about 7.4 to 7.5. I was told these fish were bred to the local water.

This illness first presented with a white fungal infection on the fish with the big scab. I suspected there was a bacterial problem. I gave them the strong salt dip followed by fresh water. Then malachite green treatments followed by freshwater changes for a week and a half. The fungus disappeared but they were not cured.

Four rounds of erethromysin could not cure this either. I decided it might be protozoan and so they got four rounds of API General cure.

Right now I'm down to trying Triple sulfa. Tonight was the first treatment, but I don't know if anything is going to work. I fear this is something like iridovirus, with no cure. 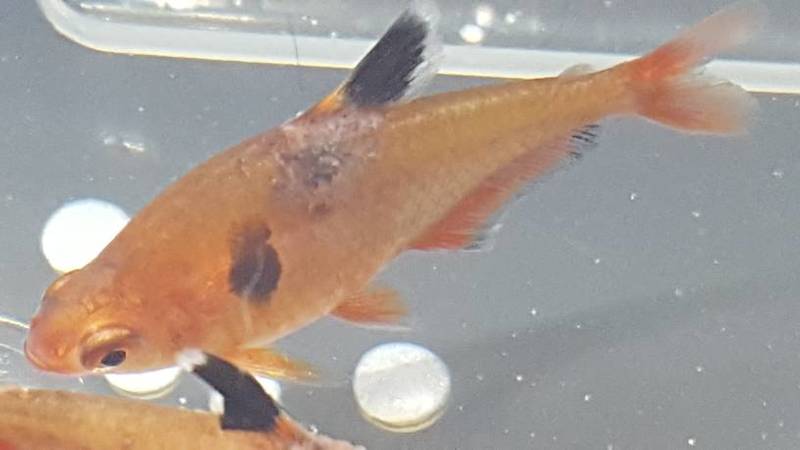 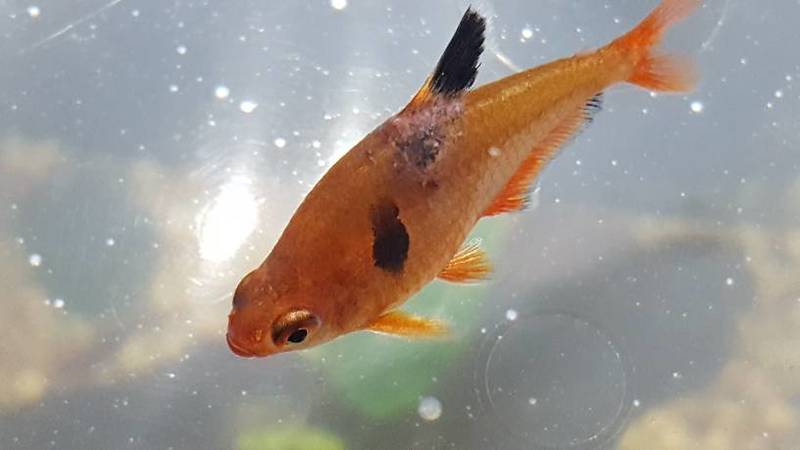 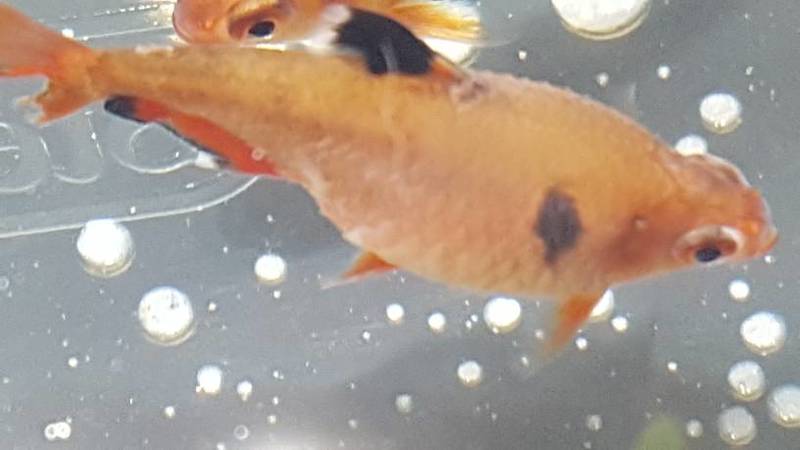 The first two photographs above are of the same fish while the third photograph is a different fish. He is the one who really bloated, with the tail deformity.

These fish have been getting frequent water changes and doses of antibiotics.

I gave the fat one a dipped in Epsom salt which didn't seem to affect him once I had dumped him back in freshwater. I had previously been feeding them food infused with antibiotics but I don't think this guy got any.

Well I finally did enough reading about various fish diseases that I discovered that something called saddleback disease was actually columnaris, and this is what one fish had.

Both of them are hanging in there and getting water changes twice a day but they're in a small quarantine.

Also I tried feeding some more medicated food, but I don't think it will work.

The bloated fish is still quite bloated.

Well I did get the bloating to reduce on the bloated fish but he never did recover and passed away two days ago.

His partner in the quarantine seems to have recovered, but unfortunately I inadvertently allowed him to escape back in the general population!

So now I'm in fear for the rest of the serpae in that tank.

Finally, everybody got a water change today and a dose of triple sulfa, and it seems to be what is helping the most.

I'm glad you were able to save one sorry that no one helped you out. My condolences for the other guy. I hope all is well after you reintroduced him

I actually managed to save 4 out of 6 fish. The 3 fish that I reintroduced him to were not perfectly well either but they were not nearly as ill.

Those four guys are now in their own little Hospital tank and the six new tetras are in their 10 gal QT.

Both batches are looking better and better, and in 3 weeks I will be introducing them together for a while, before I put them all in the display tank.

At least another month all told, before I put these guys in with my Cories.

Unfortunately I lost another serpae and it's one that had a serious case of Saddleback.

I treated it early on and it was in complete remission but all of a sudden he had it again and this time it would not go away.

I'm afraid that all I did was kill off a main strain of bacteria and let a less controllable strain develop until it killed my fish.

Either that or the fish was killed by something else in its weak condition, after it had recovered from the first disease.

Its three brothers remain in QT, and I've tried to give them some prophylactic treatment but I'm afraid this is going to take each one of these fish in turn very slowly.

I'm going to divide the three fish up into separate containers and try some new medications that I've never used before.