I’ve decided to start keeping a log on my 10 gallon betta tank. I thought about doing one, and i just decided “why not post it here so i can share info with others?” So here we go. Ill try to keep up with it as much as possible, weekly maybe?

alright, so fish wise, i have one male red crowntail betta (his name is phoenix), who is very aggressive and flares at me all the time. Then i have 8 celestial pearl danios which he flares at all the time as well but they aren’t bothered by it.

plant wise, i’m not sure the specific scientific names, but i have Valisneria, ludwigia repens, dwarf hairgrass, java moss, and one i forgot the name of. No CO2, 30 gallon sponge filter.

my betta does have a little fin rot, but I just got him like 2 days ago and im watching it to see if it gets any worse and his tank has almond leaves, so i want to see if he heals on his own before trying anything that’ll cause him stress.

im trying to think of a cleaner-upper that’s small enough to co-exist with what i have already in this tank. I was thinking like nerite snail at first, but i kind of want to see what other options there are. If anyone has any please recommend

If your betta is aggressive probably not shrimp, snails would work probably.

CPD’s are such cool little fish, bright colors interesting behavior (if you ask me) My I ask what temp it is at because they prefer lower 70’s if I am not mistaken

If your betta is aggressive probably not shrimp, snails would work probably.

CPD’s are such cool little fish, bright colors interesting behavior (if you ask me) My I ask what temp it is at because they prefer lower 70’s if I am not mistaken
Click to expand...

I have my temp at a steady 76 degrees which i know is kind of borderline for CPDs but they seem to be thriving as ive had them in there for about 2 weeks now. They were there before i even planted it.

thanks for the suggestion. I hadnt thought of shrimp, and i might give that a go. Im planning to do a 5 gallon shrimp build soon so i might just drop a few that i get for that tank in this tank when the time comes!

I wouldn't do shrimp with a betta. All of mine attacked everything except Nerite snails.

To be honest I would watch your CPD's closely.

The best thing to treat and prevent fin rot is water changes. With a Crown tail who are super susceptible to fin rot, I would change water 2 times a week 50%. The IAL will also help.

I wouldn't do shrimp with a betta. All of mine attacked everything except Nerite snails.

To be honest I would watch your CPD's closely.

The best thing to treat and prevent fin rot is water changes. With a Crown tail who are super susceptible to fin rot, I would change water 2 times a week 50%. The IAL will also help.
Click to expand...

Yea he is kind of an aggressive betta which i am wary about. The CPDs dont seem to be bothered by him but i will keep an extra careful eye on them.

i was leaning towards more of a snail for the cleanup crew, but i was thinking of just trying some different options i have. Shrimp I know are a miss or hit, based on my experience in the past. Ill most likely get a snail in the end though.

thank you for the help on fin rot i will most definitely keep doing water changes twice a week. 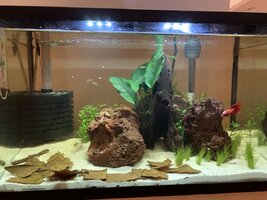 So I added what i think is an Anubias congensis, and it makes the tank look so much better. The background plants have so much growing in to do, and they're getting there slow and steady. Sometimes i just wish it was fast and steady.
The CPDs are doing so well, and they are so cute just all schooling together and being social with each other. My Betta is different, and I'll get to that in a minute. You can see in the very top left corner of the tank on the airline tubing is my new rabbit snail i got for the cleanup crew for now. It is so cute, and is super active for a Rabbit snail. All my other Rabbit snails move slow and graze in slow motion. The Dwarf hairgrass is starting to shoot runners out, and I'm happy about that. 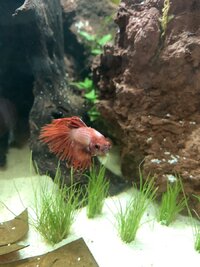 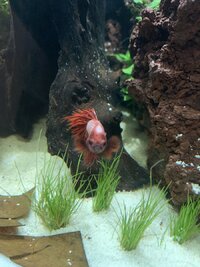 Getting to my Betta, I have a new problem. I must have done something right, because his finrot doesn't seem like it's there anymore, but i may have just gotten accustomed to looking at it. I'm pretty sure it's better though. The problem is, he's missing scales near the top of his head. it's not a fungal infection or anything like that because it's not fuzzy. The scales are just like, gone. I'm thinking that maybe he just scraped it on a lava rock or something and so I'm just monitoring him and keeping the water as clean as possible. If anyone could help me on this it would be greatly appreciated. I just don't know what's really wrong with him. He's not acting sick at all, and he has a very high energy level. He flares at me often and even when I'm trying to feed him. I know it's not pigmentation because it's not symmetrical, but besides an injury, I don't know what else it could be.
You must log in or register to reply here.

Know of a great thread on Fishlore that should be on this list? Submit the thread link here:
Great threads on Fishlore