Please use this topic to post your Rosy Barb photos.* I'll leave it stickied so it appears at the top of the posts. 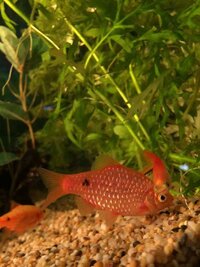 This is my rosy barb, hope you like him 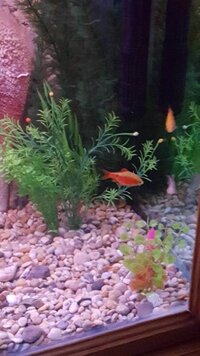 Wow, they are pretty!

Wow, this thread is tragically abandoned! Maybe because it's really hard to take a good picture of those hyperactive rascals . Here's mine. When I started my tank a year and 3 months ago, I got 6 rosy barbs, 3 boys and 3 girls. Only 1 female and 1 male of that batch are still alive and kicking, but I have some offspring that was born in the tank. 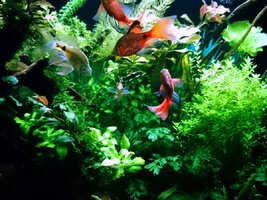 In the photo below you can see 4 generations of barbs: The big female, Tasha, is one of the barbs I bought when I got the tank, the 3 males grew up in the tank and are a year old now, the smaller female(?) on the right is about 5 months old (the only one of that age), and the smallest one is 4 months old (there are 2 more) 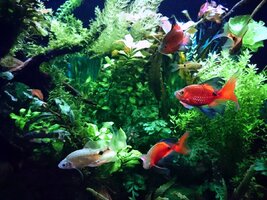 Take a moment to appreciate black pattern on the tail of the barb at the top of the photo below. I haven't seen any photos of rosy barbs with such patterns, so I guess it's quite rare. His name is Fancy for a reason. Another of his brothers, Pree, has a single big spot and some really small ones, while the third one, D'av, has none. 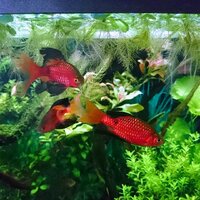 Here's all 4 boys, the oldest one is the one with frayed fins. His name is Bolt. His fins were already damaged when I bought them, shabbiest of the 3 boys I bought, and they never grew back. Ironically, he's the only one of those 3 I bought that's still alive. 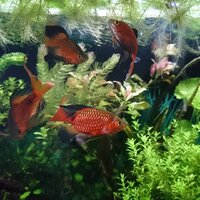