Bit of a long post but wanted to save some time on the back and forth. I've got a group of 6 rosy barbs that has been dying off one at a time (down from 8). Whatever it is acts pretty quickly, I've lost both fish within 2-3 days of me spotting the symptoms. All the fish I've lost are related (from the same spawn) as I obtained them from a local fellow (no way of following up/contacting him).

My difficulty is that the symptoms are mainly behavioral. Normal behavior for the rosys is energetic and following anyone who walks by the tank, they'll group together every few seconds before moving off around the tank to graze. The ones that are dying off become lethargic, they drift away from the group and don't "touch back" for long periods of time, begin to hide behind the heater/filter intake.

All other fish appear healthy. There's no obvious signs of gasping at the surface and the fish still eat. Scales appear fine, no signs of ich, external parasites or dropsy. They aren't clamping their fins and I haven't observed any flashing. There's slight signs of a sunken stomach but I need a second opinion on that. I'll attach pictures, I must be missing something.

I've yet to medicate but am considering something like Prazipro. Initially quarantined the group for a month, if I can catch this fish I do have a quarantine available however at this point I think I need to treat the whole tank if it's an internal parasite. Would appreciate a second opinion on this as I'm short of ideas, I lost a rosy barb last month, one last week and turned the light on this morning to find another one exhibiting similar behavior.

I lost this fish within 8 hours of the photo:

Appreciate your time and help - thanks in advance! 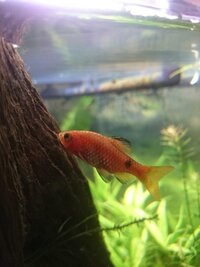 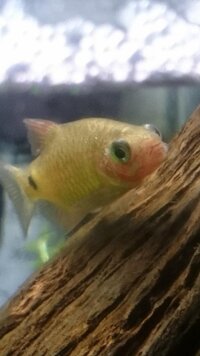 I'm so confused about rosy barbs