I have a 55 gallon freshwater tank. I had five tiger barbs (one was a long finned) two orange flash apistos, two horse face loaches, a flying fox, a rope fish some clams and nerite snails and live plants. Several weeks ago I noticed what looked like fin rot on the long finned tiger barb and it looked like it’s body was covered with tiny air bubbles (definitely did not look like grains of salt). I started treating the tank daily with pimafix. Several of the other barbs started getting the “air bubbles” covering their bodies and within a week all the fish had died except for the rope fish. Some of them looked diseased and some looked completely healthy when they died. After a week of treating with the Pimafix, I did a partial water change and started treating the tank daily with Pimafix and Melafix. I noticed that the rope fish had a pink feathery spot on its gill. I took out the clams and added aquarium salt at 1 tsp/gallon of water. During this week the tank became completely cloudy with spots white algae(?) and everything was completely covered with sliminess. After this second week of treatment I did another partial water change vacuumed the sand. This white algae is back. It’s even covered the snail shell.

I’m now in my third week of treating with Pimafix, Melafix and aquarium salt. The rope fish hasn’t gotten any worse he seems to be moving fine he has been eating well throughout. Can anyone help identify what is wrong with its gill? 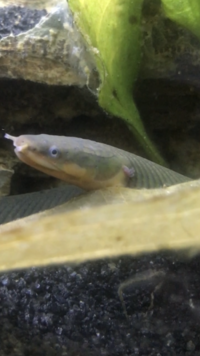 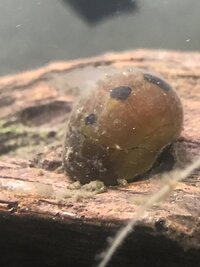