I'm new to rope fish, and have done some research on them. I know it's nocturnal and not to expect much during the day. But my rope fish doesn't really move much. He is alive as I can trigger him to flee but I haven't been able to see much movement in a few days. Should I be worried! Should I catch him to give him a good look over? I don't want to stress him out if this is normal behavior. This is where he has been hiding. I've only had him about a week. I have been offering live and frozen proteins but I'm not sure if he is eating it or not. I do have the lights dimmed and have floating plant cover on about half the tank. There are also several hides in the tank but none quite as small a space as he has found for himself. 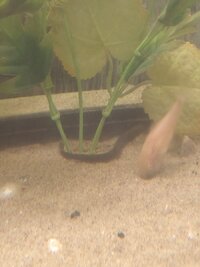 Get something he can totally hide himself in all the way
My rope fish likes mysis shrimp.
They escape easily too so watch for that
Upvote 0

Get something he can totally hide himself in all the way
My rope fish likes mysis shrimp.
They escape easily too so watch for that
Click to expand...

There are several hiding spots in the tank available. He just chooses that spot ‍♀️ I'll look into mysis shrimp.
Upvote 0
You must log in or register to reply here.