I have had a tank of minnows, danios and a couple platies running for about 5 weeks now (one of the platies unfortunately died about a week in). A couple days ago I introduced amanos to the tank, and ended up getting another platy while I was there (I do realise I should have set up a quarantine tank, I did not think about it at all haha). Once I let him go in the tank, he was staying near the bottom and I thought it was just the shock. As I watched him I noticed that he was swimming pretty erratically and wobbly, and went down to the bottom again as if to rest. I realised that half of one of his pectoral fins was gone (ripped vertically, as in there is barely a fin there).
It wasn't from any of the other fish, it was all quite calm when they were introduced, plus he's been swimming like this since the start. I dont think its fin rot, his other fins and the other fish seem fine. Is there a way to be absolutely sure that it isn't fin rot? and what can I do to help him out while it heals (if it ever does) - would keeping him in a smaller, separate cycled tank help? he looses steam pretty fast trying to swim with one fin. Thanks in advance!
I got a couple pictures that aren't great but kinda illustrate my problem, he just ventured up to get flakes from the top but had to come back and rest like this. he doesn't take big gulps, but he moves slightly every once in a while and looks around. 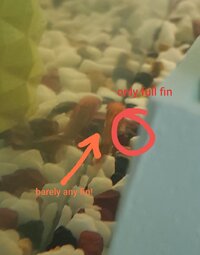 Maybe it’s been missing since the start. Was he like this at the store at all?

I'm not completely sure, my dad says he watched the older platy chase him so it might have been a bite. They seems fine together now, I haven't seen any chasing matches at all. Not sure little guy is gonna make it, though. getting more and more sluggish :/

I'm not completely sure, my dad says he watched the older platy chase him so it might have been a bite. They seems fine together now, I haven't seen any chasing matches at all. Not sure little guy is gonna make it, though. getting more and more sluggish :/
Click to expand...

If you do have a smaller tank you can put him in, that might help him with recovery. It’ll probably be easier for him to eat and not lose steam quickly. Just make sure to keep the water nice and clean. Should hopefully grow back.
You must log in or register to reply here.