About 3 days ago I rescued a betta that had fin rot that I had noticed sitting on my LFS shelf for at least a few weeks now. He is in a heated 5 gal (80F), walstad set up with some RCS and snails. The tank has been established for a few months now and reads 0/0/0 for ammonia, nitrites, nitrates. Lots of plants and some IAL too. I did a 50% water change yesterday with aged water with Prime.

But, I just noticed a little red spot at the tip of his analfin. I'm seeing this could be regrowth? The tips of part of his tail are also a bit darker but that from my photos (he's very photogenic) his fins are not getting shorter. Just want to make sure it's not something more serious.

What do you think? 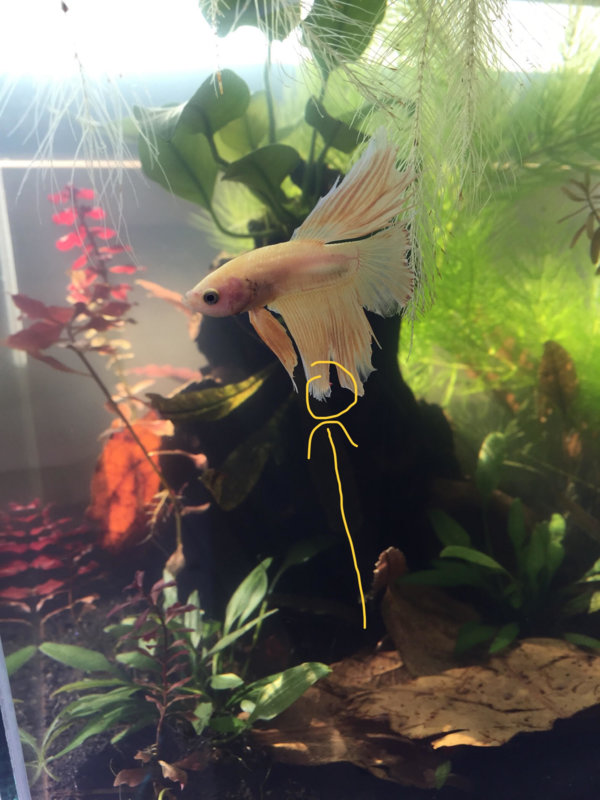 Just giving this a bump... anyone have any input?

Quite honestly, it's hard to make a decision without a reference photo. Do you have a photo from the day you got him?

However, I'm not convinced it's definitely regrowth. Perhaps the beginning of it, if anything, but real regrowth should look clear and it could just as easily be the beginning of an infection. I had a fin-nipping betta and his fins were quite often red at the edges, and they got shorter and shorter (very very slowly) over the span of about 7 months, until they were almost touching his body. The thing is, I can't ever be sure if that's a sign it was infected, or a sign it was trying to grow back while he was biting it. Tricky.

Thanks, here's some more photos. I am pretty sure the spot is new as of today as I noticed right away this morning. I don't have quite the same angles unfortunately:
Day 1 (excuse the tannins and algae in the water! was still testing 0/0/0 despite looking like this): 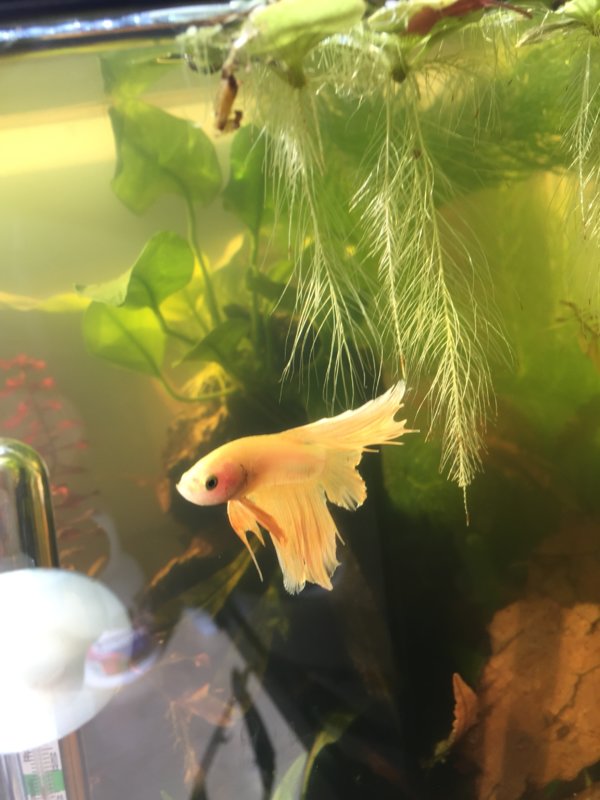 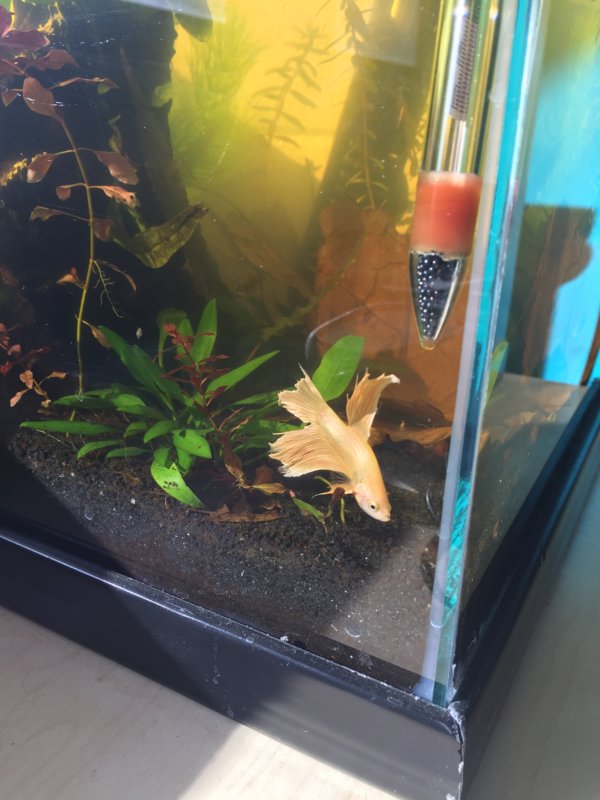 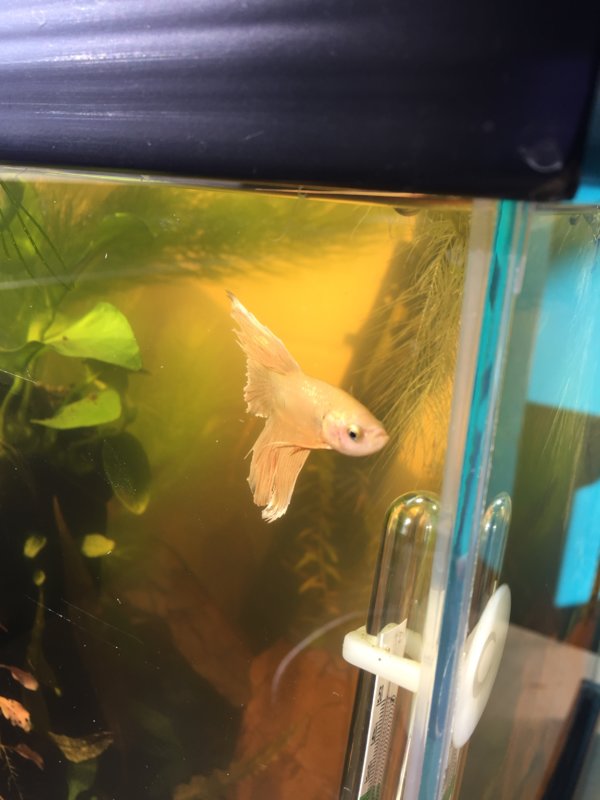 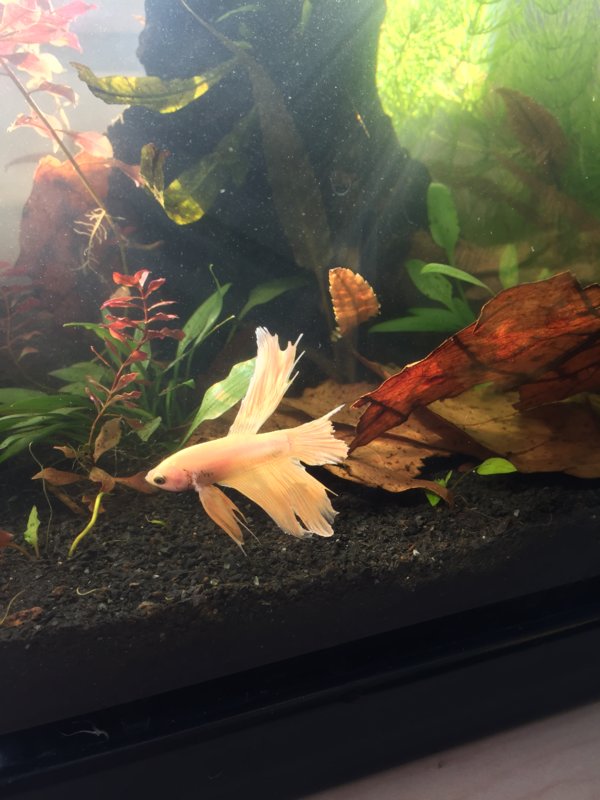 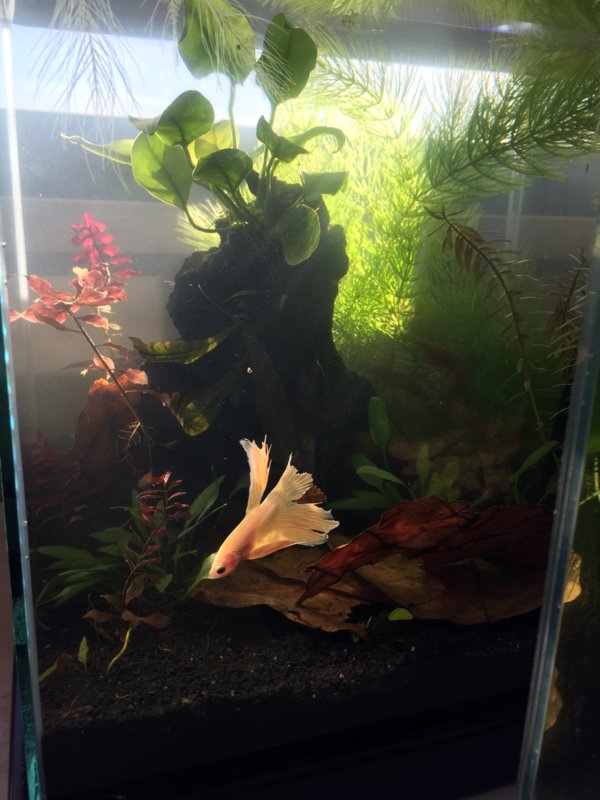 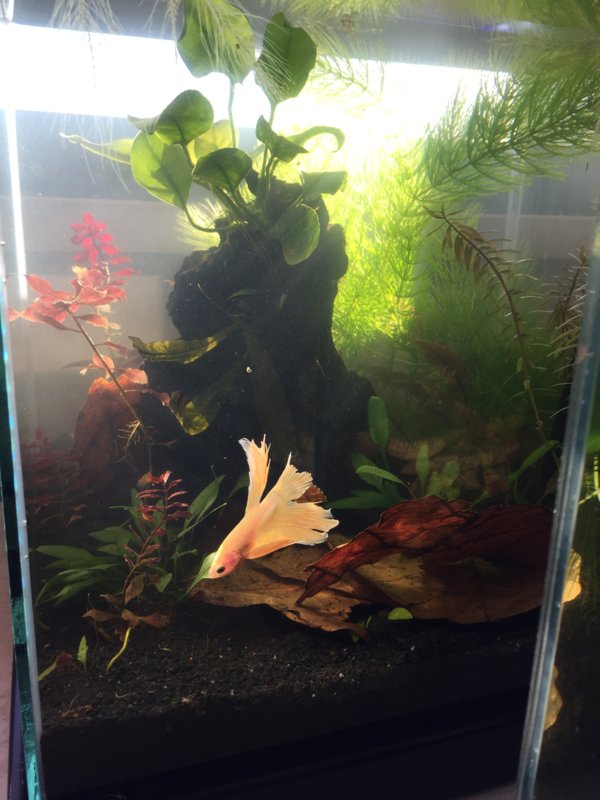 And then today again for easier comparison: 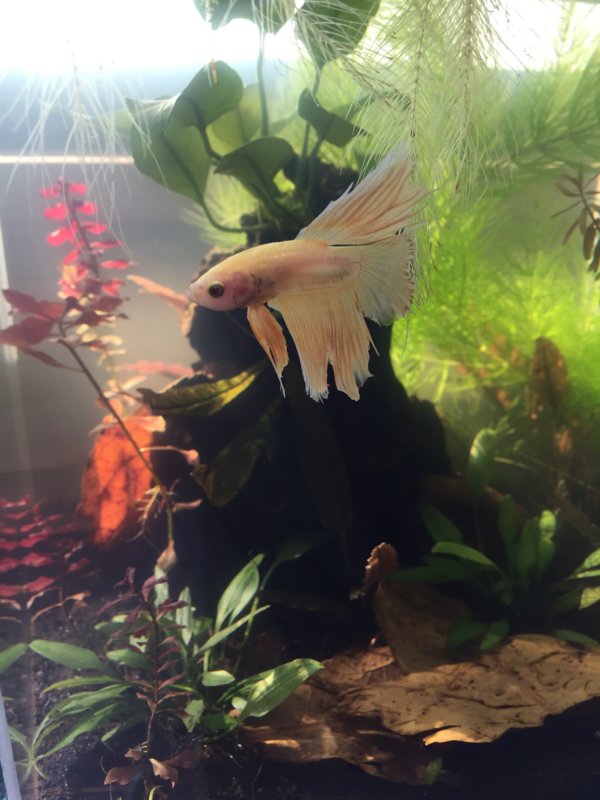 I'll also mention that the tips of the tail rays only look dark when they are back lit. Otherwise they look white. But the red spot is red no matter the lighting. It almost looks like a little blood blister.

If it is biting I hope his new home will help. He's been very occupied exploring and eating all the baby snails.

Hmm, still tricky to tell. I don't see any receding but it also looks like that split in his ventral fin wasn't there until day 2. I would just keep an eye on it and reassess in a couple weeks to see if it's receding or not. Fingers crossed it's just blood vessels forming to promote tissue growth.

Thanks! Yeah it's tricky because he is in different positions in all the pics. Will just keep on monitoring and give him some time to acclimate and heal up.

Ugh as I am writing this he just had an episode flashing and scraping on the plants and wood in his tank... I haven't seen him do that at all until just now (I've been watching him literally all day because his tank is on my desk at work and it's been a long day....). Maybe he hurt his fin doing that before? Seems to have stopped and back to normal now... hmmm.

DanaNM said:
Thanks! Yeah it's tricky because he is in different positions in all the pics. Will just keep on monitoring and give him some time to acclimate and heal up.

Ugh as I am writing this he just had an episode flashing and scraping on the plants and wood in his tank... I haven't seen him do that at all until just now (I've been watching him literally all day because his tank is on my desk at work and it's been a long day....). Maybe he hurt his fin doing that before? Seems to have stopped and back to normal now... hmmm.
Click to expand...

That is possible that's what he did to his fin. Right now his symptoms are spotty and inconsistent, indicative of many different diseases or none at all. Monitoring is still your best bet.

Ok thank you! Yeah I def don't want to just go medicating him when all he needs is time and a good environment.

I'm prob a bit paranoid right now because I had a whole ordeal with copper in my water in another tank that killed my last betta because I didn't figure out what was happening in time. Figured I should try to save one from the pet store to redeem myself.

Dang it, today he has some new splits and a bunch of slit type holes in his tail and dorsal fin! And maybe another red spot at the end of his pelvic fin. The dorsal fin holes are pretty alarming. Do you think that could have been from him flashing and scraping last night? Or rapid progressing fin rot?

The only thing I can think of was the water change was maybe disruptive. I know I have a pH difference between the tap and my tank, but it was temp matched and aged and aerated for a day, and my other betta with the same water is fine. I forgot my test kit at home today so I can't check his water right now, but I dosed a bit of prime just in case something is up with the ammonia.

I just added some vitacem to the water too.

Here you can see the new red spot: 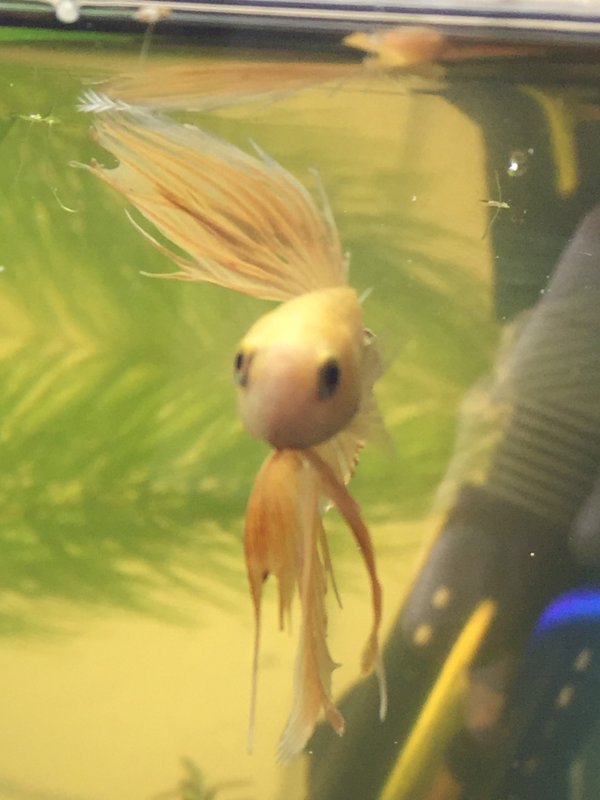 And here the splits in his dorsal fin: 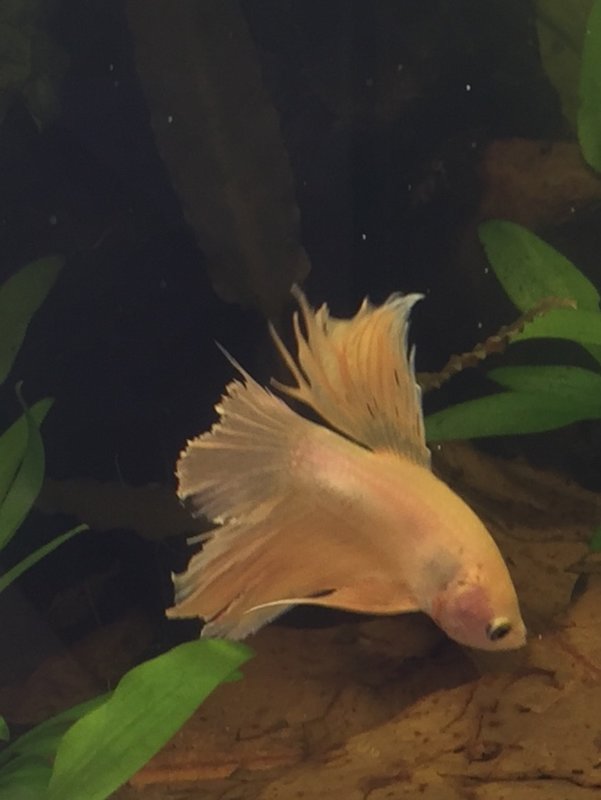 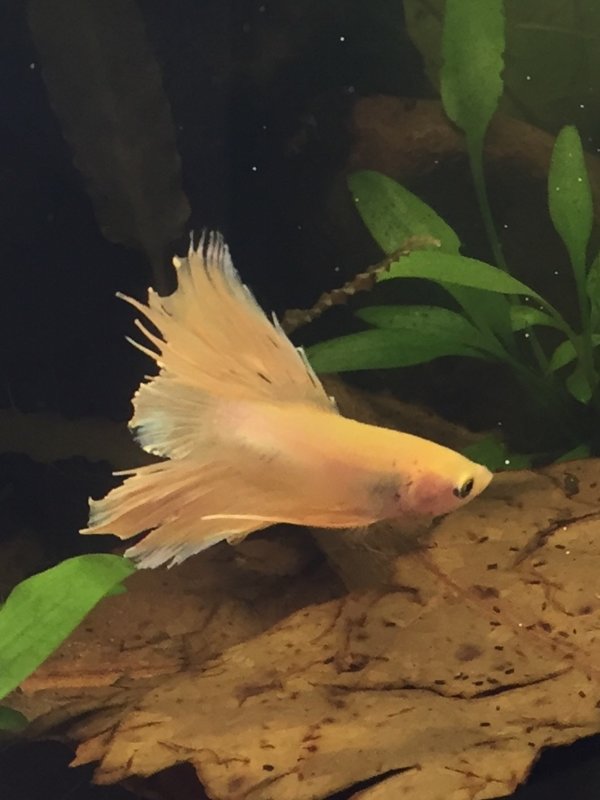 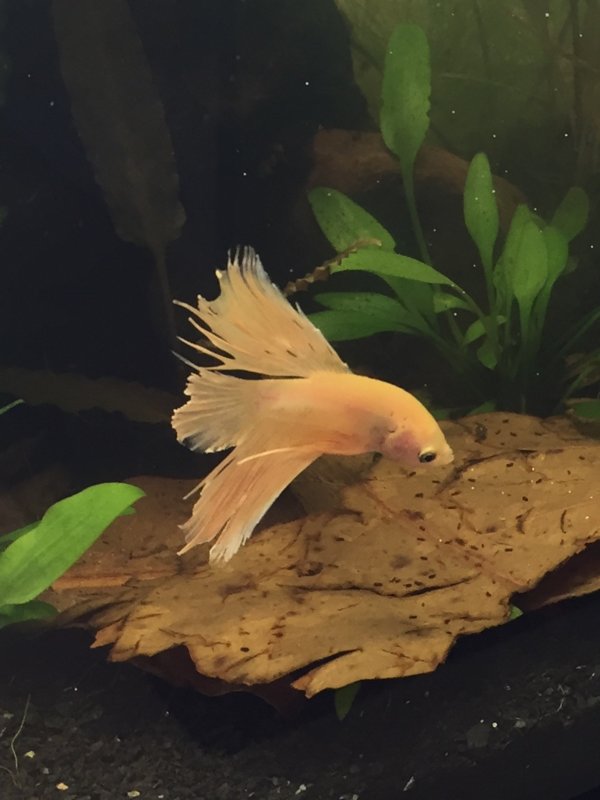 Think it could maybe be the hornwort? I do have hard water... and am reading that some people report hornwort tearing their betta's fins. He loves exploring in it though

Seems there is debate over hornwort and bettas, but after watching him push and squirm around in the hornwort and seemingly get snagged once, I went ahead and removed it (I actually think my other stem plants have been a bit stunted since adding it, so I'm ok with not having it...). It seems like the most likely thing that could make that many large holes over night in his fins. Will replace with something softer and less worrisome.

Well I removed the hornwort last night, and this morning all the holes have healed already! And the red spots are not as bright red, so look like they are healing up as well. So he must have been getting snagged! Replaced it with some water wisteria and more ludwigia which will hopefully be softer. I went ahead and removed it from my other betta's tank too to be on the safe side.

A side benefit is that it looks like my rotala grew noticeably overnight since removing the hornwort.

Got some stress guard today anyway and will keep using it along with the vitachem till his fins have grown back.