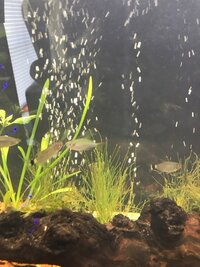 Today I looked at my fish and noticed their gills were more red than usual. They aren't looking very bad but are still more red than regular. This is especially visible in my Neon Dwarf Rainbowfish. My Otos seem fine, as well as my pearl gourami, Zebra loach, and my Black Phantom Tetras. I added liquid ammonia reducer and also filter media to reduce the ammonia. My carbon was removed from my filters as well so I could use medication for my fish. Any ideas on what this could be? And did I do this correctly to treat it for now?

Also, what exactly are you treating your fish for?

So you have one dwarf rainbowfish. Aren't they schooling fish or have I got that wrong? I was told to get more fish so Buddy wouldn't get stressed . I don't know. Whats the tank size?

I have 4 female and 2 male neon dwarf Rainbowfish in a 30 gallon. The tank was cycled for 2 weeks before any fish was added in. And the tank has been up for over a month now. The Rainbowfish were added all together on Friday. They were the last additions to the tank. And I have de-nitrite by SeaChem in my filter as well as fluval ammonia reducer media that I added in once I noticed the red Gills. The medicine I used was API Fin and Body Bacterial Disease medicine. It was the only medicine I had currently. I'm planning on getting SeaChem medicine tomorrow. But I am treating them for red Gill disease.

What are the current water parameters - pH, ammonia, nitrite and nitrates? If the tank was properly cycled and you didn't add too many fish at once, you shouldn't see any ammonia issues.

I don't have any experience with the Fluval ammonia reducer but I know Prime will detox ammonia and nitrite for up to 1ppm for 24 hours. I'd test daily and do at least a 50% water change if your ammonia and nitrite get to 1 or above. Once your tank is completely cycled, it should take care of any ammonia issues you're seeing in your fish. You shouldn't need any meds to take care of that.

Well they seem to be doing better. I went back to the fish store to get another male Rainbowfish, because there is currently 2, Significant size difference too, so the smaller one was being bullied. But now I have the 3rd male there is less aggression. But In a few of the tanks I saw dead fish. I asked about the dead fish and they said only the person who runs the fish area can take them out. But I picked up MetroPlex by SeaChem cause I have inverts so it has less copper. If they seem to get worse I'll treat them with metroplex. But I put back in the carbon to remove the API meds. So hopefully all will be good soon. A week-2 weeks ago I had high nitrite. So I had used an increase in prime then used the ammonia reducer to help with any ammonia then did 2-5 gallons of water every day for a week and a half.