Rebuilding from the Ashes - Restructuring the Betta Barracks

Member
So, about two weeks ago, The wife and I went to a comiccon in Washington, DC. My house's heat is controlled by a wood boiler and with no one there to refill the boiler, it would die and get frigid cold in the house. I asked my neighbor if he could refill the boiler for us and he agreed and we traded him eggs from our chickens per his request.

I left and came back to the house freezing cold. Apparently he forgot to fill it up after the first day and the fired died. I didn't panic immediately because we sorta put in a few fail safes. I made sure all my fish had heaters and that the room with the rats had a space heater and that the wife's room with her herps had its electric heater turned on a bit higher in case the wood boiler's fire did die. I checked all my tanks, all of them were roughly around 72-74 which isn't the best but won't kill the fish especially when the ambient room temperature was about 40 degrees.

Then here comes the horror story. One of my heaters apparently couldn't keep up, the heater on my one betta barracks crapped out and died sometime over the weekend and I come back to frigid water at around 40-50 degrees on my one tank. Immediately I panic, but surprisingly all my bettas were still alive, but just barely. I sprang into action, I slowly raised their water temperature over the next 6-8 hours so it didn't shock them, and waited to see what would happen. All four of my boys developed body fungus and it was bad. So I started my treatment for it as soon as I woke up the next morning and saw it.

I lost Ruffles over that second day, Alexander Francois followed a few days later. I was and still am cut up about it and I still feel so guilty. Fenwick, who was still recovering from a bad case of fin rot he got while I was visiting my parents in California (and my wife didn't inform me of this X___X so it could have been less terrible if I had just been informed but that's another story. Fenwick used to be a breeding betta so when I got him, his fins were already shredded and his tail recovery had been slow and labourous. he had been recovering well until then where he back slid very rapidly.) Fenwick held on until last Saturday but he too passed away. He will be honored greatly in betta Valhalla for how much fight and spunk this little guy had.

Purple Fish, much to my surprise despite having he most skin fungus on him, managed to pull through. Now he has only remnants on him that hes still being treated for but hes swimming around and exploring and eating.

But, after this horror story, I've decided to take this opportunity to rescape and plant the entire tank properly. I've also decided to have it just be a 3 betta barracks instead of 4. My friend, the one I got Fenwick and Ruffles from, had them in this beautiful 4 barracks 10 gallon and I was super inspired to do the same. Now, I think I'm just going to stick with the 3 spaces and really plant them out. I've got some of the plant growth gravel and am going to reuse the gravel that was already in the 10 as well, but I'm going to rebuild from this tragedy.

Once I get off work in about an hour, I'm going to do it. Wish me luck!

This is a picture of the old tank


From left to right it was Ruffles, Alexander Francois, Fenwick and Purple Fish

Member
Sorry for the loss. I like that you go now for a 3 department tank....gives the Betta a bit more space

Wolf65 said:
Sorry for the loss. I like that you go now for a 3 department tank....gives the Betta a bit more space
Click to expand...

and same, now that I had it divided into four for a few months and really had time to just watch it and take it in and observe, I think it is a little cramped for my liking. 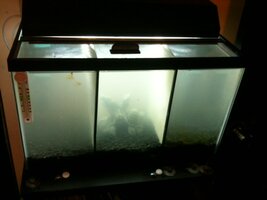