I *accidentally* got a hold of some pink ramshorn snails and decided to do an experiment to figure out if they are indeed capable of asexual reproduction (as not ALL hermaphroditic creatures can self-fertilize).
Background: I knew it was a possibility to receive some ramshorns with some new floating plants I had ordered since the seller had them in his tanks, but I kept an eye out for them and as I found them I plucked them out to isolate them. I had read on various forums that they are hermaphrodites and can breed asexually, but also read very sparingly that there wasn't sufficient research to show if they do in fact breed asexually or not, and one single post on a forum that said they do not. I prefer to keep snails that do not leave egg pods around the tank, so I really wanted to know if they do or not before I decided to keep any of them in my tanks.
Method: I had found 4 small delicate snails, clear shell with a small pink dot inside them. I took a risk and added one (the largest) to a small tank that I had cycled but that I hadn't added any inhabitants to yet. It is planted and had some minor algae in it as some good starter food, and I planned to feed some snail food as the algae decreased. For the other 3, I decided to keep them in something that I could keep a closer eye on. I used regular Mason jars (no lid), and put the next largest one by itself, and the last 2 together in another jar. I have changed their water for new tank water every 2 or 3 days and fed them daily, alternating small bits of "snail snacks", algae wafers, and snello.
Results at 7 weeks: It has been 2 months since receiving the plants, and 7 weeks since finding the snails. On the first evening, the snail in the small tank was feeding away on the algae of the plant it had first been introduced to. The next morning I could not find him or his shell and I have not seen him ever since (this is still driving me crazy and I have been keeping the tank cycled just in case, but I am thinking that this one is no longer with us). The snails in the Mason jars, however, are still alive and well. I knew it would be a bit before they start breeding, so I hadn't really been checking for eggs. They're in clear Mason jars, so I figured it would be pretty obvious when it did occur.
Yesterday, I decided to add some riccia moss that I had received (unfortunately with a lot of algae in it, but fortunate for the snails I suppose). I upsized their jars to accommodate their growth and the addition of the moss as well. The single snail immediately began munching away and later buried himself into the moss. Today there is plenty of poop at the bottom of the jar indicating he was a busy bee throughout the night, and I observed him hanging out on the underside of the floating moss today. The pair of snails... well, when I went to try to fish them out of their old jar, I felt a small hardened lump on the side of the glass, almost like a drop of dried tree sap. I looked closer, and it was a small, crystal clear egg pod! 6 pods in total, with about 12-15 eggs per pod (I *think*, they're tiny and clear so it is hard to count). 2 of the pods have a tiny little white-ish speck in the middle of each egg (picture attached). I carefully checked the old jar of the single snail, and no egg pods were present.
7 Week Conclusion: I'm pretty sure that this indicates that the ramshorn snails do not reproduce asexually. It is possible, however, that they simply prefer not to reproduce asexually, so it may be holding out for a partner and end up laying eggs by itself later on. I will continue to keep this one little guy isolated and time will tell. Of course, one solo sample may not be a solid representation of all ramshorns, so once these eggs hatch I may isolate more and see if the results are consistent.

Any info regarding experience that anyone may have in relation to this is welcome. I will also try to add more to this to confirm or disprove the current results.

the 1st in the tank, you might want to look very closely inside the filter. i've found many baby ramshorns inside of my filters.

nice experiment. are you going to keep the one ramshorn by itself and see if it'll eventually reproduce asexually?

the 1st in the tank, you might want to look very closely inside the filter. i've found many baby ramshorns inside of my filters.
Click to expand...

I have a sponge filter in there, I didn't really give much thought to that... but now that I'm thinking about it, it could have gone in through the top. It's the kind that sticks to the side of the tank with a suction cup. Next time the filter sponge is due for a squeeze out I'll take the whole filter out and check inside the tubes.

nice experiment. are you going to keep the one ramshorn by itself and see if it'll eventually reproduce asexually?
Click to expand...

Yes, I'm planning to keep the one isolated just to see. I figure if it will reproduce asexually, adding it to the larger space with the moss and plenty of algae might help it along. Hoping to have some of the eggs hatch to continue with a few more isolated ones to confirm (if the current one still doesn't reproduce).

8 Week Results: The isolated snail still has not produced any eggs. The lil guy has certainly done an excellent job at cleaning the moss up though! I've attached a photo of this snail with his moss and a photo of the moss pre-snail. 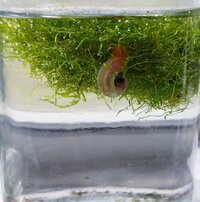 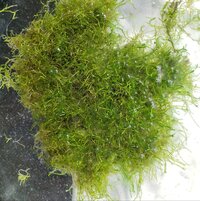 The pair of snails are still producing more eggs, and I even caught them in a warm embrace (photo included of course). No baby snails yet. 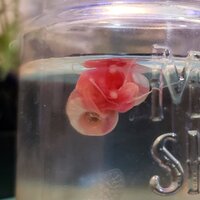 11 Week Results: The single ramshorn snail has still not produced any eggs, and has grown a bit larger than the pair. I keep rotating in new algae covered moss for it and it keeps munching away on it. I started leaving the waste in the bottom of the jar a couple weeks ago and just keep checking the water parameters and it is surprisingly staying good, so its like a miniature walstad environment. The water is crystal clear, the riccia looks great, and the snail is actively munching and crunching and never hangs out at the water surface. I just sprinkle in some new water every few days to top it off (from evaporation).
The pair are still mating and putting out eggs like crazy. I've even lessened their food intake in an attempt to decrease the eggs and it doesn't seem to affect their production at all. Still haven't seen any baby snails, but expecting to within the next couple weeks.
11 Week Conclusion: It still appears that a single ramshorn that is isolated soon after hatching cannot reproduce asexually. Hoping for some new baby snails from the pair to isolate a few and compare results.

Watching. This is very interesting. I had red rh in my 5g with no food but algae and biofilm and they still exploded. I have little clear grey ones in my 9g right now.

I had 1 ramhorn in my shrimp tank (6 gallon) solo last year. he got HUGE like size of a quarter

He died sadly and was my favorite snail.

I have ramshorns in all 10 of my tanks ( they breed like crazy) , but he was the only 1 I personally cared about because I got to 'know' him being solo in the tank. RIP Pinkie.

I had 1 ramhorn in my shrimp tank (6 gallon) solo last year. he got HUGE like size of a quarter

Thanks for sharing! Sorry for your loss. It's great to hear that your loner didn't lay any clutches also. My solo one is about dime-sized now, would love to add the little guy to one of my tanks. Wish they didn't lay so many clutches so I could add a few to each tank. The jar with the pair of ramshorns is covered in clutches and decreasing feeding didn't slow them down, so I'm really hesitant about adding more than one to my tanks.

Watching. This is very interesting. I had red rh in my 5g with no food but algae and biofilm and they still exploded. I have little clear grey ones in my 9g right now.
Click to expand...

Glad you're finding it useful. I figured I was a bit overboard with it, but I know I would appreciate having the info available instead of guessing. I really like the ramshorns, but I am worried about an explosion of snails and having clutches all over the tank.
You must log in or register to reply here.

What to do with baby Ramshorn snails?

Is there a Peaceful way to get rid of Ramshorn snails?