Rack system for breeding/fry. How does this sound

Thinking 3 29 gallon tanks on a rack, plumbed together (and plumbed for fast 30% water changes), filtered with one large canister filter, individual heaters (or one large one in one of the tanks?), sponge filters on each ran off one pump. Wanting tanks for breeding pairs, fry (May need some tank deciders), and grow out. Thinking another 2 tank rack of 55 gallon tanks for further grow out/housing.

And making my own bulkheads DIY style as well

Looks great! For the 29 gallon racks I'd do a sponge filter in each tank, not sure exactly how you'd run them all into one canister, but for every 3 tanks I'd use one of these two sunsun's: 793gph sunsun, or the 525gph with UV sterilizer.
Pretty much the same for the 55 gallon racks, just scaled up obviously.
OP

Basically my idea was to plumb overflows in each tank, put the output from the canister into the top tank let that overflow to the next tank and overflow again to the next tank we’re the input for the canister filter will be. Then plumb another over flow 2/3 the way up from the bottom of each tank and run that to a valve I can open to drain 30% all at once. Then just fill the top tank and the overflows will do the rest. . . It sounds simple in my head but I’m sure it’ll be tougher in practice haha

Sounds like you at least have a pretty solid plan, just the idea of plumbing multiple tanks together makes my head spin so I definitely can't help with that part lol.
coralbandit has a pretty good size fish room set up, I've never thought to ask much questions about all the upkeep though. Maybe he can give you some pointers/ideas.
J

With all due respect to The King of DIY, his skills at carpentry and cabinet design are lacking. That rack has the same poor design of most of his racks. It's incredibly poorly sized for the tanks shown in the intro photo. How are you supposed to service those tanks? You've got literally 3-1/2" of space above the bottom two tanks. I couldn't even get my arm in there.

If you notice in the video where it has several racks of tanks with little clearance, the racks are staggered so the bottom levels come out further, providing open access to the lower tanks. Even with this I'll bet servicing those tanks and netting fish is a major pain in the posterior. Without that staggered top access it would be impossible.

I once had a rack with four tanks. It gave me about a foot of clearance above each tank. Even that was rather tight for some things.

Also keep in mind you might want lights of some sort above each tank. Even fish that normally live in the shadows do get some light during the daytime.

Joey is clearly successful in the hobby, but he is not the place to go for advice on racks or tank support. He has no concept of weight transfer through the structure, usually depending on shear force resistance of the connectors to support all the weight. I've sometimes seen him build things where the structure is dependent on screw resistance to axial force, which is absolutely terrible design.

In this case all the weight of the tanks is transferred to the vertical rack supports through whatever connectors are used to join the cross pieces. This is poor design. The weight should be transferred directly by using a dado joint or a half lap joint. With either of those joints the connectors are simply holding the pieces together, not supporting the weight of the tanks, and that's how it should be done.

As to filtration, if this is strictly for breeding and fry grow out, I'd put matten filters in each tank and call if a day. That way the tanks are separated so there's no cross-contamination. You also have zero chance of fry getting sucked into an intake. Many breeders use matten filters in their fry tanks. There's a reason for that.

The overflow from one tank to the next is an accident waiting to happen. It depends entirely on proper flow from each tank to the next. One clog and you could end up with water all over the floor and possibly a canister filter running dry.

The water change bulkheads sound handy. I'd move them down further to give you the option of changing more water. You'd have to keep an eye on it to stop at one-third, but at least you'd have the option to do 50% or 75%, depending on how much further down you put the bulkhead. The change would also go faster with the bulkhead further down.

I would consider putting a single drainage pipe system on the rack and running all the pipes from the water change bulkheads into it. Even if it only ends in a hose bib that allows you to connect a garden hose, that would let you run the hose outside or to a floor drain and avoid dealing with buckets. If you've got a floor drain nearby, run the drain pipe right to it and you're really set. I'd put an open Y somewhere in that system so you can run a siphon hose into it for vacuuming detritus from the tanks. Just keep in mind the possibility of the water backing up when you position the Y. If you've got a 1" bulkhead feeding a 3/4" garden hose, the water will back up.

No fan of Joey or canisters .
I would not link large tanks .
I would not use a canister on one tank more or less 3 running in series !
Air driven sponges and HOBs for me .Water changes are done at different level of manual to automated ..
I run 50-60 tanks made all my own racks .The one in pics of Joeys video look sub standard . I won't even give 1 of his videos a single view so can't say more then that about his stuff..
OP

Seems like the consensus on the first video I posted is a pass.

Wanted to go with 2x4s to keep it affordable. Found another tutorial online that looks promising


I also have a ton of metal storage racks in my garage I’ve seen people use however I know nothing about what they are rated for as far as weight.

SCRATCH THAT!!! Online says only 300lbs per shelf

I make my own racks with 2x4..
Just not having screws or nails hold the weight like the pics of stands you post .
I dado but others just add 2x4 under the 2x4 that holds the tank so the screws/nails don't have to support the load like in video above ..
My stand design ; 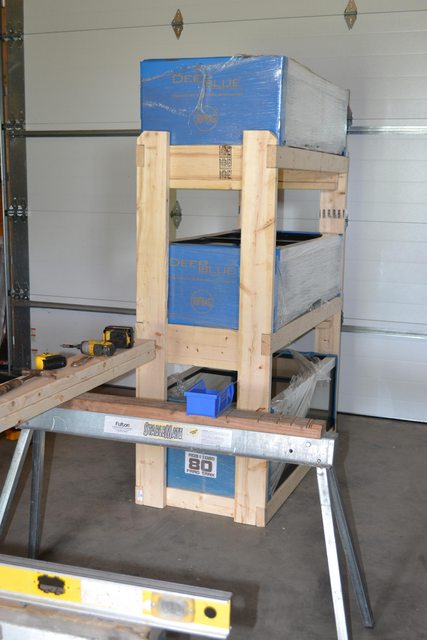 No matter size my design for all stands is the same ..
OP

Looks awesome! Anyway you could post more pics so I could borrow your design??? Or are there plans anywhere?

I built it much like the video you posted.
If tanks are 18 inches wide I go to 2x6 for the uprights but if 12 inch tanks 2x4 are what fit .
I like to leave at least 10 inches in between top of tank and bottom of next support .
Less will make maintenance trouble some ..
I like to add a 1x5 to front to clean it up and add extra strength . 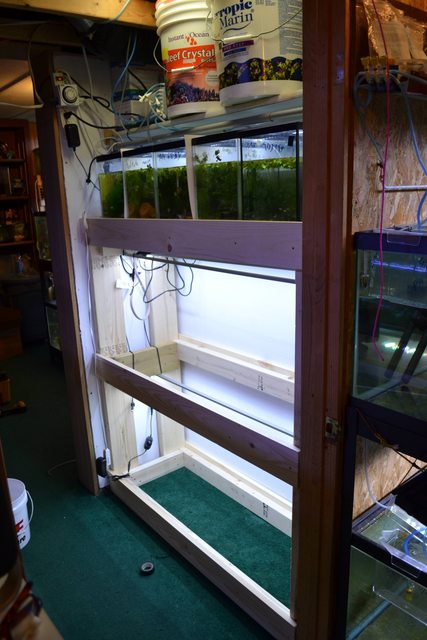 The front to back pieces really just hold front an back in place but I use some larger wood sometimes [2x6] just to get more screws in it .
J

MoshJosh said:
Wanted to go with 2x4s to keep it affordable. Found another tutorial online that looks promising
Click to expand...

There's nothing wrong with using 2x4s. My objection is to the method used to join the 2x4s together. In the video you posted here and in the first photo posted by coralbandit you can see where dado joints were used to attach the horizontal 2x4s to the vertical ones. (Vertical 2x6s in the coralbandit photo, but the principle is the same.) You cut a notch out of the vertical piece for the horizontal piece to slide into. Structurally this makes the two pieces like they were one piece. The weight that's applied to the horizontal member is transferred directly to the vertical member. The screws holding the pieces together do nothing but keep the pieces aligned and resist any torque, which should be minimal if the dado is cut accurately and the horizontal member fits tightly into the vertical member. Put some glue in the joint before assembly and the screws are just clamping the pieces until the glue sets. A couple #12 screws would do the job.

In the racks built by Joey, the horizontal members are screwed to the outside of the vertical members. This means all of the weight on the horizontal members is transferred through the screws to the vertical members. You're depending entirely on the shear strength of the fasteners to support the weight on the horizontal member. You can do it this way but it will never be as strong or as resistant to lateral forces as a properly done dado joint. You most definitely would not want to be using #12 screws for this. And you'll have to forever be on the alert for rust.
Share:
Facebook Twitter Reddit Pinterest WhatsApp Email Link