Hi guys, I just lost my betta Spritz and I'm absolutely devastated. He was so full of personality like a puppy.

Long story short... I noticed his belly increasing in size till I felt he probably needed to fast/be treated for possible constipation. I limited his eating a bit over a few days and fed him some Organic pea.

The next day he was obviously not feeling well. He ignored me. Only moved to get breaths from the surface and then would drop back down to the bottom to rest. Wouldn't even look at me. Finally after doing this all day I got a bit worried. IDK why he wasn't lying in his bed near the top, but I figured I would put him in a half quart container and let him float in the tank so he didn't have to swim so far every time he needed to get air.

He stayed in there overnight. I would replace the water with new water periodically. The next day I made a plan to go get some epsom salt to give him a bath to help maybe get his bowels moving as there was no indication he had pooped at all. I went to the store for 10 mins and came back and he wasn't breathing anymore.

TLDR: So my question is, if his movement was somehow constricted in the small container, could he have suffocated? Like do they need to swim forward to breathe? I feel like I read somewhere they need to move their body to make the water flow over their gills. That they can't just push it themselves. IDK. Im just trying to figure out if there was something more I could have done, or if I did something wrong and made things worse. His rapid decline is a bit jarring. Literally one and a half days and he's gone.


(He also had a growth on his face for most of his short life, so Im not sure if he may have had tumors inside of him as well.) 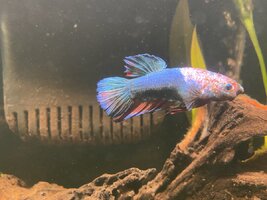 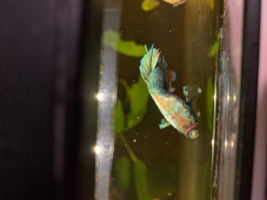 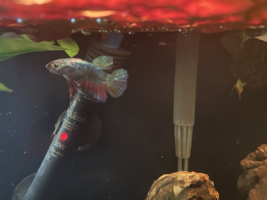 I doubt he died because he couldn’t breathe. If his belly was expanding it could’ve been a tumor or some internal issue. Overfeeding is also a possibility. I think that I would’ve fed him frozen daphnia instead of peas because daphnia is more effective and better for carnivorous fish but because of how fast he declined I don’t think you could’ve done much else.
Upvote 0
You must log in or register to reply here.

Betta acting weird - At a loss