Don’t wanna read all this? Just know that not cleaning your well-lit tank frequently enough/not thoroughly enough will slowly but surely lead to an inability to see your fish/ get it clean again without drastic measures. Don’t do what I did and please do your weekly water changes, QUARANTINE EVERYTHING, and for the love, invest in a good algae scrubber. Don’t be discouraged, this has truly made me believe there is no tank too nasty to clean, but it won’t be fun or quick or easy.

I’ve had this 20gal long for over two years now, and from the beginning it has been filled with problems. Initially, the issues were callamanus(?) worms killing the new fish (platies) in droves, then possible fish TB, then finally healthy fish BUT an invasive snail problem (thanks BucePlant). After ripping out the live plants and replacing them with artificial, I realized that the population of fish had gotten out of control, which led to too much poop, which combined with too much light and laziness when it came to cleaning, led to a horrible algae problem. For months you could barely see the fish even with persistent scrubbing, and the decorations were covered with algae so thick they felt like rocks in a lake (ew). At this point, my tank gained its name, “The Swamp.” After getting my ish together, I realized it would take drastic measures to get this thing clean. But how? It took the coronavirus panic (and being out of school) to help me realize how: bleach. I thought that since bleach can kill germs, surely it can kill algae too! A quick google search confirmed this, and so I went to work. Over most of last week, I would take out a few decorations, soak them in a bleach and water mix, rinse them, soak in tap water, rinse again, and then soak in dechlorinated water until there was no more bleach smell. That all worked well, until it was time to remove the substrate, which was caked in so much poop and algae that it was literally impossible to clean, so I chucked it in the trash. After letting the filter (and four filter inserts) do it’s job to clean out the murkiness left behind and using a literal putty knife to take the algae off the glass, I was left with a sparkling clean, bare bottomed, healthy tank- a complete turnaround in less than a week- and the fish love it! Interesting side note: during all of the tank’s nastiness and issues, the tank never re-cycled and the water parameters have somehow stayed pretty good. Nitrates were sometimes a little high, but overall livable. Neat, huh?
Takeaways:
1. Clean your dang tank
2. Quarantine your dang fish and plants
3. Don’t be afraid to use bleach if needed
4. Don’t buy platies unless you have a backup plan for the millions of babies
5. Don’t use EcoComplete if you plan on ever removing it, that was easily the hardest part of all this. It leaves tiny bits of sand EVERYWHERE.
6. Don’t be afraid to give your fish medicine, but also don’t be heartbroken if they don’t make it. I love my fish and I know we all love ours, but I lost eight fish from the worms with only one survivor (who has recently passed, RIP Noodles).
I know this was probably long and rambled, but yeah. Let’s all hope for a disease and algae free future for “The Swamp.” By the way, the before picture was NOT how the tank looked on the daily, but rather how it looked after removing the substrate. 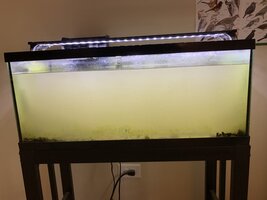 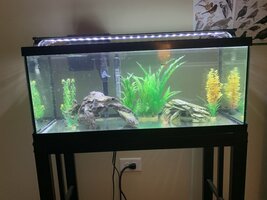 Lol this reminds me of when I came back from a vacation and my mom was "taking care" of my tank and it was green as a SWAMP. I only have a 10 gallon but I couldn't see a thing. Eventually got rid of the problem with very fine sponge media but it was as green as shreks swamp lol
OP
M

Lauraaac said:
Lol this reminds me of when I came back from a vacation and my mom was "taking care" of my tank and it was green as a SWAMP. I only have a 10 gallon but I couldn't see a thing. Eventually got rid of the problem with very fine sponge media but it was as green as shreks swamp lol
Click to expand...