Now that my anubias has recovered from our little ordeal I want to get rid of the detoriated leaves... i have new growth on both sides of the damaged region, and my first thought was cut the 2 ends and discard the damaged middle section. Then i got to thinking, the rhizome in the damaged region is still in really good shape and it seems, at least to me, that i could re "plant" it clip off the stems of the damaged leaves, and let it grow new ones. Would this work?
My other thought was to basically cut it in half, and then trim the damaged leaves back to the rhizome, and bury that part in the substrate to act as an anchor until it re-roots. I figure only the buried part of the rhizome would die off, and by then the rest would be re established. Is this an accurate line of thinking? This is a top down view that shows the damaged part i want to remove as well as a side view of the same parts. 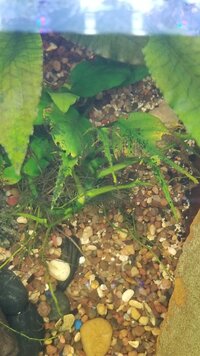 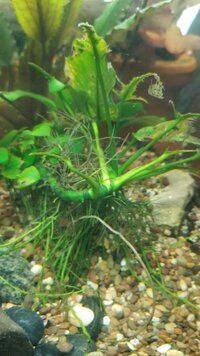 You'll find some notches with new leaves growing, cut there. Make sure there are roots growing out of the new cut or it will die. A sharp knife or scissors will do the trick.
Upvote 0

I marked it with a line. Your plant should grown fine after being cut.

You can cut it in between the "knuckles". I wouldn't bury them. I don't think that would work.
Upvote 0

Stop my fish from entering my filter?