i needed to move some goldfish to a larger body of water so why not a pond? 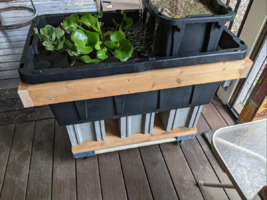 i have taken some pictures of the project thus far that i have been wanting to post. will try to keep posting updates as things progress.

too bad the original post cant be updated after a certain period of time so i could update the picture to its current state periodically.

looks cool, what type of goldies do you have and how many, how big is the pond in litres or gallons?

taped together and marked out the cut-to-length 1/2" pvc pipe to try and get symmetrical slits for where the water will flow from. 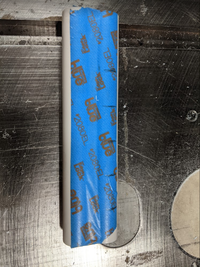 used the table saw to cut slits in the pipe at a satisfactory depth after testing on a sacrificial piece. i dont think it makes a difference but i left enough clearance for the end caps. 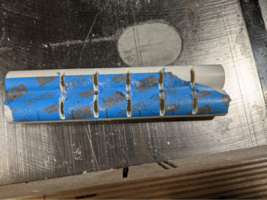 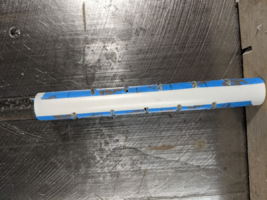 put the bits together in a 7g hdx tote. 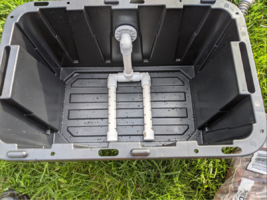 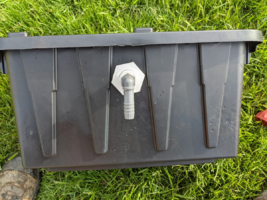 i was going to add a plenum but was lazy and decided to keep it simple on the first build. added washed lava rock on the bottom, a middle layer of river pebbles, and capped it with pea pebbles. again, i doubt it makes a difference to have that middle layer in there. 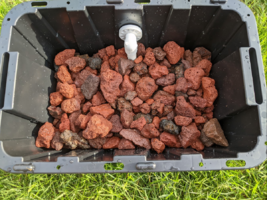 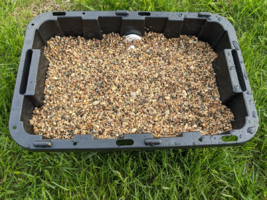 pretty typical to do something backwards but i put the substrate in the filter before i had made the outflow waterfalls.

i drew two notch outlines evenly across the front of the totes structural ridges and used a utility knife to cut only the left and right side, and along the top. this gave me a flap to bend over with a putty knife. i guess less is more it the heat gun. 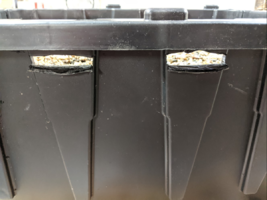 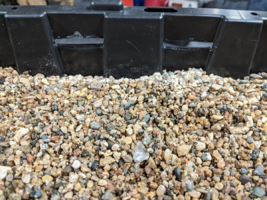 That a pretty substantial filter you have built.
My compliments on the wooden frame, thumbs up.

i cut a single side of a milk crate out with a jigsaw so the fish were not having to swim through the handles only. the crate is an almost perfect height and strength to get the perfect waterfall effect while being able to hold the bog filters weight. 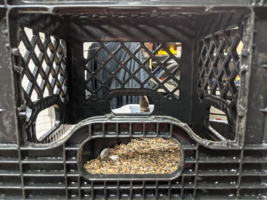 ya there are 4 waterfalls now. i had to drain it and add two more because nobody frowns when theres more waterfalls.

looks cool, what type of goldies do you have and how many, how big is the pond in litres or gallons?
Click to expand...

i think the goldfish are fan tails. the pond is another hdx tote. says it is 38g.
added a water hyacinth and some water lettuce. these are all fairly large plants and might be too big for this pond.

That a pretty substantial filter you have built.
My compliments on the wooden frame, thumbs up.
Click to expand...

ya she bows. i had to do something quick. 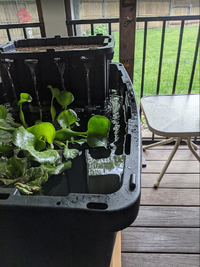 might be a smidge on the smol side. its something temporary for now until i figure out how i want to finish the outside of the pond. 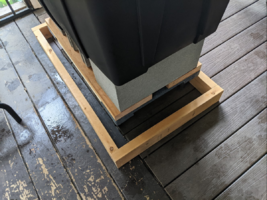 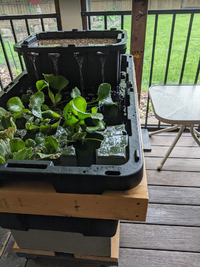 i put the pond on a furniture dolly. its rated for 1,000lbs. with the cinder blocks and wood im like halfway there. the cinder blocks are needed to keep puppies from drinking out of it. having it on wheels has already come in handy while power washing the deck. rolls pretty nicely, considering. minus the sloshing water. 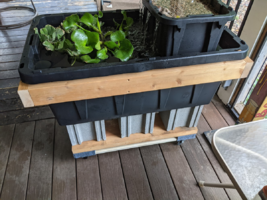 i think the goldfish are fan tails. the pond is another hdx tote. says it is 38g.
Click to expand...

if its 38 gal, and only what looks like 2 goldies you may be ok, but for 2 fantails i would say 55 gals is good size. seeing they are still smallish it should be ok for 6-12months but after that i would reccomend upgrade or rehoming, best of luck, to stop it bowing, perhaps you could use to containers? double the thickness, or dig a hole in ground so dirt can support the sides.

ive added in this cypress grass or "baby moses." hopefully it does well. 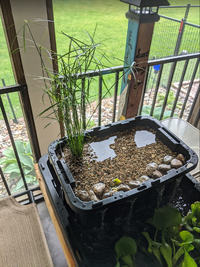 also, does anyone know what is going on with this water lettuce? its a 3 season deck and i dont recall seeing any bugs. i will take a closer look tomorrow. could they just be melting from the difference in water from where they came from? or could it be the lack of sun? the pond gets basically no direct sunlight. 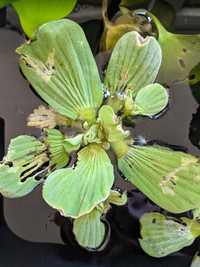 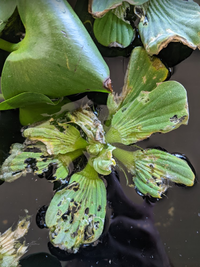 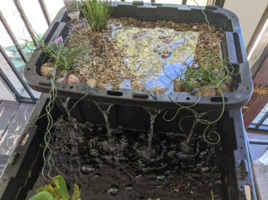 the water lettuce has taken a hit. found out that it is worm or caterpillar. i went through all of it to pull them off but im sure there are more. fed them directly to the feesh. 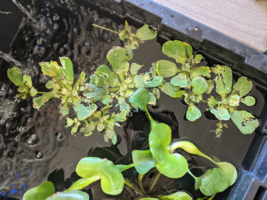 I just love the fact it’s on wheels !! Fantastic little project . You put my dinky tub to SHAME Oof that water lettuce looks poor , add a little fertiliser and see it it bounces back before the hyacinth takes over everything ! I like the spiral rush .

I just love the fact it’s on wheels !! Fantastic little project . You put my dinky tub to SHAME
Click to expand...

ya its the fastest tub around. it was mostly because i wasnt sure where i wanted to put the thing. also, it was going to be the smaller hdx 27g tote. the hdx 7g filter tote i have here fit perfectly inside and rest on the rims of the hdx 27g totes. you would lose the large drop on the waterfall if thats your thing. i was told not to chase waterfalls.

Oof that water lettuce looks poor , add a little fertiliser and see it it bounces back before the hyacinth takes over everything !
Click to expand...

what fertilizer would you recommend?

thanks! no idea what to do with the plants. ill just keep throwing things at it

Personally I’m still working that out. A lot of people use thrive. I’ve got leafzone but I’m not impressed , I’ll use it up though. Tropica premium was another I was recommended recently. I find it doesn’t take much for water lettuce to bounce back even if it shrinks a little first. I bought one single one and it’s now in the three tanks and the tub.

That’s usually how things work out best when it’s fluid and flexible.

the floaters have only worsened. the water lettuce has not recovered and the hyacinth seems to be dying off. the bog plants are fine. there is really only ever indirect light on the pond since its on a covered deck. ive thought about moving it to where it gets a smidge of sun for a small portion of the day. am i the only who figure out how to kill an invasive species? 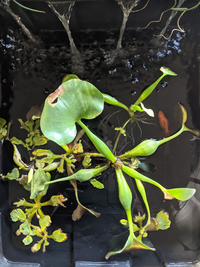 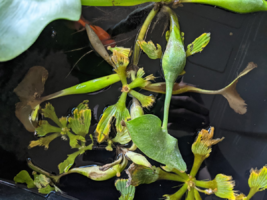 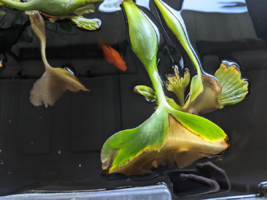 Can you take the floaters out and pop them in a bucket of old water in the sunshine for a bit ? I find iron works wonders with water lettuce when mine look sorry. Obviously you could have a completely different deficiency but I’m just saying what I’ve found.

Can you take the floaters out and pop them in a bucket of old water in the sunshine for a bit ?
Click to expand...

will give that a go with the next water change water.

Can you take the floaters out and pop them in a bucket of old water in the sunshine for a bit ? I find iron works wonders with water lettuce when mine look sorry. Obviously you could have a completely different deficiency but I’m just saying what I’ve found.
Click to expand...

turns out it was the goldfish eating them. figured that wouldnt be an issue since they are heartier plants. ive removed some plant parts to see if they will grow in the bog filter for now. will have to look into other plants for the pond area.
You must log in or register to reply here.