I am currently in the middle of a fight with the nefarious Camallanus worms in my 75 gallon. They showed up in my Blue Acara after a month of clear quarantine, but only him so far. I am blasting these bastards with levamisole, fenbendazole, and New Life Spectrum Hex Shield food pellets for internal parasites all at once. They persist in the Acara after my first 3 days of treatment with all 3. Yes I am soaking these in food for the fishy boys.

I've removed all the substrate, refilled 90% of the water, and am being vigilant to look for expelled worms. Whenever my Acara expels worms though, my silver dollars eat them before I can net them up! My stock is mostly younger fish, and I am not giving up on them, but these worms seem resilient to both medications. Is now a good time to panic?
Yes, I have read many forum posts on here for these worms, but cannot find anything about being unable to net out these pests and still treat successfully.
If anyone has pointers or advice, I would appreciate it.
Look at my boys! 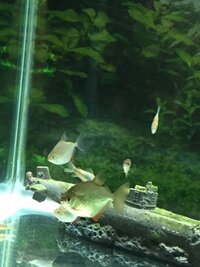 Levamisole is sensitive to lighting. Many say you can keep the tank light on because it’s particularly sensitive to UV, I would still kill the light during treatment and especially protect from sunlight. The actual product is probably in a bag that doesn’t let any light in/ is opaque completely. Make sure your levamisole is the real thing and doesn’t have additives. You should also make sure it is still active, check the expiry date. Levamisole should also have a unique smell. When I treated my betta the treatment worked very quickly, but by then it was too late as I was quite late to get the levamisole, but it treated my other fish as well and I never saw the awful critters.. except for a dead one I found in my filter, just to remind me of what might have happened if I didn’t treat the tank and vacuum substrate. If the worms are already protruding, you don’t have much time as the internal damage has already began, once you see white/clear poo it’s most likely your fish won’t make it. Still treat for sure, but if fish don’t seem to get better afterwards, you should euthanize. They’re going to be in pain and they won’t recover from sever internal damage.

In your picture I don’t see the worms, normal as they usually retreat when a fish is swimming. Can you try to get a picture of them?
Upvote 0

Soaking in food isn't a reliable method. Dose the levamisole directly into the water.

I wouldn't worry about fish eating expelled worms. There's a good chance they can't be infected that way.
Upvote 0

I dosed with levamisole in the water directly for 3 days in moderate darkness (curtains closed lights off). The acara expelled some worms but he has a small lump in his abdomen which I guess is some worms. I bought my medicine from Subquaria so I think I am safe.
The infected fish was swimming at the other end of the tank, but there aren't any worms sticking out of him at the moment, so I didn't think a picture would help. Should I post one of him for reference?
I read soaking the food was critical because the medicine needs to reach the areas inside the fish where the worms are(by ingestion). Otherwise, soaking the water only hits the worms when they show themselves outside the fish.
Upvote 0

Can I use fenbendazole to treat camallanus worms?

Dec 4, 2021
Madchild57
Camallanus Nemanode and Tapeworm with Shrimps and Nerites

Jul 31, 2021
Chiasmodon
How Long Can It Take To Expell Camallanus Worms?

Feb 11, 2018
MrTomFish
How to use Camallanus medication HELP